The BBC Radio 4 programme ‘The World Tonight’ claims that:

“When it comes to daily news, The World Tonight takes international events seriously and covers them in depth. Using the BBC’s international network of correspondents we report on what is going on, put it in context and provide a forum for debate on the big issues facing us all.”

The December 20th edition of that programme included a report from the Gaza Strip by the BBC Jerusalem Bureau’s Yolande Knell – available for listening here from about 39:38.

“This week a powerful winter storm has swept across the eastern Med. In the Gaza Strip it’s inflicted further hardship on people already enduring power cuts for much of the day because of fuel shortages. Aid agencies are warning of a deteriorating humanitarian situation as Israel and Egypt impose tight border restrictions and divisions between the Hamas government and the Palestinian Authority in the West Bank are exacerbating Gaza’s problems, as our correspondent Yolande Knell has been finding out.”

What exactly do those “tight border restrictions” touted by Eades entail? In fact the only restrictions in place are those prohibiting the import of weapons (as, one imagines, is the case at most international borders) and dual-use goods which can be used for military purposes to the Gaza Strip. Even those dual-use goods can be imported into the Gaza Strip with special co-ordination and on condition that their use is supervised. All other goods can enter the Gaza Strip freely. Eades, however, deliberately misleads listeners by failing to provide that vital context.

Knell opens her report by setting the scene:

“The streets looked more like rivers in Jabaliya refugee camp in the Gaza Strip last week. Cars and donkey carts were driven cautiously through flood water as the region saw some of the most severe winter weather in decades. Now, at the Jabaliya elementary school, more than thirty families are still taking shelter.

‘They brought us in a bulldozer’, Amna Abu al-Ish tells me. ‘We woke our kids, their beds were flooded. The water reached up to my waist. It’s ruined everything.’ A neighbour – Ibrahim Nasrallah – shows me how rainwater mixed with sewage came into his house from all directions.

What really slowed down the emergency effort here was the delay in getting heavy equipment working to remove the water.”

As was also the case in reports she produced last week on the same subject, Knell neglects to inform listeners that Israel facilitated the entry of water pumps (which are not defined as dual use goods, by the way, and hence could have been acquired by the Hamas government in advance) into the Gaza Strip the day after the storm began, together with fuel of various types and cooking gas. Knell continues:

“For weeks Gaza has had serious power shortages with just a few hours of electricity a day. The power cuts got dramatically worse after Egypt cut off smuggling tunnels that were bringing supplies of its cheap, subsidised fuel under the border.”

Once again, Knell neglects to provide sufficient context to audiences and apparently finds it unnecessary to comment on the dysfunctionality of a government electing to import fuel through smuggling tunnels rather than by conventional routes. As we have noted here on previous occasions, the current power crisis in the Gaza Strip is the solely the result of a dispute between Hamas and the PA.

“This current crisis is not the result of a tighter “Israeli siege” or anything of the sort; it is caused by disputes between Hamas and the Palestinian Authority over the price of fuel since the tunnels connecting Gaza and Egypt were shut down or destroyed.

Recent Egyptian military activity rendered out of commission hundreds of tunnels that once connected Sinai and Gaza and were used to import one million liters of fuel into Gaza each day. As a result, Hamas has no choice but to purchase fuel from Israel via the Palestinian Authority at prices similar to those found in the Israeli market, namely over seven shekels ($2) per liter of gasoline. That is a major problem for private car owners.

The more acute problem is that fuel is needed to operate the Gaza power plant that generates the majority of the local electricity. The Palestinian Authority purchases a liter of fuel for the power plant for approximately 4 shekels from Israeli gas companies and has tried to sell it to Hamas for almost double, including excise tax.

Hamas has rejected those prices outright and stopped purchasing fuel for its power plant. The dramatic consequence was that the power plant has shut down and the electricity supply has been completely disrupted. The PA refuses to waive the excise tax, a critical part of its own budget. And the residents of Gaza are the ones who suffer.”

Instead of providing BBC audiences with the detailed background necessary to properly understand the situation, Knell elects to amplify the political agenda of UNRWA, saying:

“But a spokesman for the UN agency for Palestinian refugees Chris Gunness says that ultimately, the precarious situation in Gaza is created by seven years of tight border restrictions imposed by Israel and Egypt.”

The broadcast then cuts to Gunness saying:

“The fact that there was fuel coming in from Egypt, and the fact that suddenly stopped, added enormously to it, but big picture: if we ended the blockade – it’s another one of those underlying trends which could easily be dealt with simply by allowing proper amounts of fuel to come into Gaza. And beyond that, there has to be sustainable economic recovery. There’s nothing the people of Gaza want more than the dignity of economic self-sustainablity.”

Of course there are no restrictions whatsoever on “proper amounts of fuel” entering the Gaza Strip and Gunness knows that perfectly well, but this is far from the first time that UNRWA has cynically exploited the Gaza power crisis as PR material for political campaigning against border restrictions designed to limit terrorist activities which, interestingly, that UN agency never bothers to mention. Likewise, of course, neither Gunness nor Knell bother to clarify to audiences that “economic self-sustainability” could indeed have been achieved in the Gaza Strip after Israel’s withdrawal in 2005, had the Strip’s ruling regime not opted to continue and escalate terror attacks against Israel instead.

“Lorries line up on the Israeli side of the Kerem Shalom crossing. It’s the one official entry point for commercial goods into the Gaza Strip and there’s a complicated security system. The supplies are offloaded by forklift trucks and checked with a scanner.”

No effort is made by Knell to inform audiences of the reasons which make that security system necessary, including a long history of crossings being deliberately targeted by terrorists. Knell goes on to once again misrepresent Hamas’ terrorist designation:

“Israel views Hamas as a terrorist group and the two sides don’t deal with each other directly. Instead, goods are taken through a checkpoint run by the Palestinian Authority which has its own deep political differences with Hamas. These got worse with a dispute over fuel taxes.”

Again, Knell’s choice of euphemistic language does nothing to adequately inform audiences of the facts behind that dispute. She continues:

“On the Hamas-run side of the crossing, a few lorry-loads of fuel come through for the private sector, and in the past few days there’s finally been some for Gaza’s sole power plant too. It was donated by Qatar.”

Knell does not mention that during a previous crisis, 30 million liters of diesel were also donated by Qatar in 2012, but have been mostly confiscated since then by Egypt. Neither does she make it clear to listeners that last weekend Israel facilitated the entry of 400,000 liters of diesel destined for the Gaza power plant into the Gaza Strip.

Knell then visits the power plant and interviews an anonymous member of staff.

“At the power plant the cooling towers are working again, for the first time since the start of November.”

Knell: “And how long will these donations last for? Will it see Gaza through the winter even?”

Staff member: “We are talking about a supply of fuel for one month and after this month we’ll have the same situation as before. We’ll be forced to shut down unless there will be a solution.” 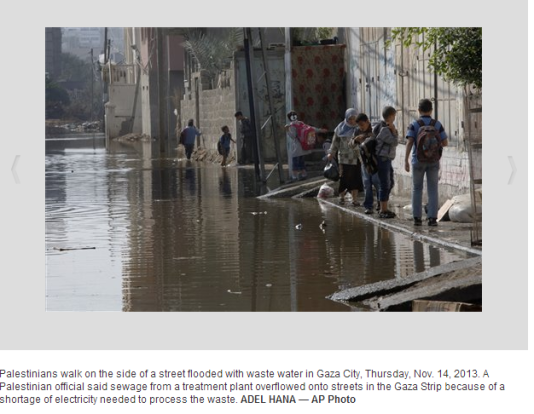 “Back at the Jabaliya refugee camp the inspection of the flood damage continues. Businesses as well as households are counting the costs. With no sign of a long-term political fix, there’s a sense that Gaza will lurch from crisis to crisis.”

“Yolande Knell reporting on yet more hardship for the citizens of the Gaza Strip as winter sets in.”

If this report – rich in pathos and propaganda, but fact and context poor – is what editors of ‘The World Tonight’ consider to be “taking international events seriously” and “covering them in depth”, then licence fee payers have every reason to feel short-changed. The background to fuel crisis in Gaza – which had created flooding even before the recent bad weather – is not properly explained and no attempt whatsoever is made to “put it in context” as far as the organisational dysfunctionality of the Hamas government is concerned and that regime’s continued prioritisation of terrorism over the welfare of the residents of the Gaza Strip.

The same lack of adequate background and context are displayed in a written report on the same trip to the Gaza Strip – titled “Floods, blockade and political rifts deepen Gaza misery“which Knell produced for the BBC News website on December 20th .

Although marginally better than the audio version,  that report also promotes many of the same inaccuracies as the above radio report and introduces other ones.

“Israeli restrictions on Gaza were increased after the Islamist movement Hamas, which had carried out scores of deadly attacks against the Jewish state, took over in 2007. Although they were later eased, exports are still very limited, weakening the economy.”

In fact, whilst exports to PA controlled areas and Israel are limited, there are no limitations whatsoever on exports to Europe, the US and the rest of the world and Israel actively helps Gazan farmers in that field.

Were the BBC – and Yolande Knell in particular – to cease the lazy and damaging practice of rote amplification of the political agenda of compromised NGOs and aid agencies (rather than doing any real investigative reporting of its own), it might actually begin to meet the BBC’s remit to “build a global understanding of international issues” by ending the habitual whitewashing and soft portrayals of the Hamas regime which is responsible for the situation of the residents of the Gaza Strip.