At around half past two in the afternoon on Sunday, December 22nd, passengers on the 240 bus in Bat Yam (south of Tel Aviv) noticed a suspicious rucksack on the back seat and alerted the bus driver, who promptly evacuated the bus and called the police.  As sappers worked to defuse what indeed turned out to be an explosive device, the bomb exploded.

” “After examining the explosives retrieved from the scene, we have concluded that this was a terrorist attack,” police spokesperson Micky Rosenfeld said.” 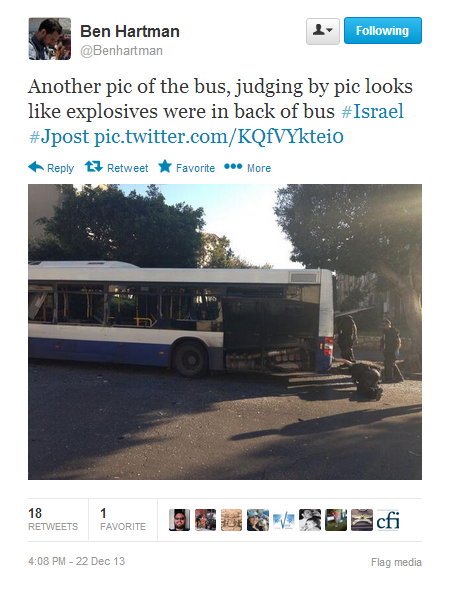 Both Hamas and the Palestinian Islamic Jihad later released statements welcoming the attempted bombing, with the PIJ stating that it hoped the incident “could usher the resumption of suicide attacks”.

Well over half a day later, there has been no mention on the BBC News website of this terror attack in which disaster was narrowly averted due to public vigilance. A thwarted stabbing attempt near Jerusalem and yet another incident of missile fire from the Gaza Strip late on Sunday night have likewise been ignored by the BBC.

Well it took twenty-three hours, but the BBC finally has an article up on its website concerning yesterday’s narrowly averted terror attack in Bat Yam. One very much doubts, however, that the police spokesman quoted by the BBC used the word ‘militants’ as claimed. 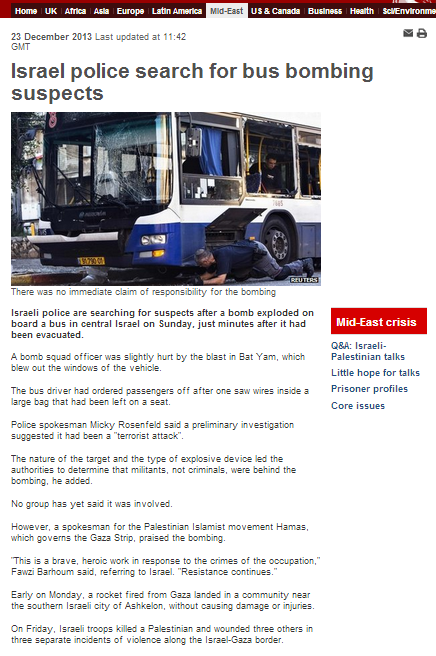 BBC silent on doubling of terror attacks since renewed ME talks