On December 20th a report titled “Palestinian shot dead near Gaza-Israel border” appeared on the Middle East page of the BBC News website. The screenshot below shows the updated version of the article. 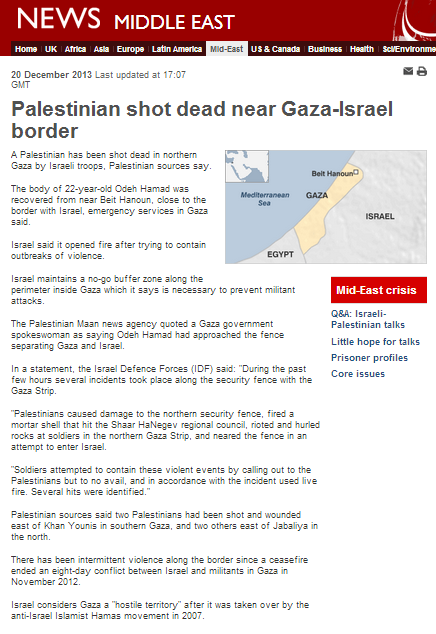 As is partially reflected in the statement from the IDF spokesperson quoted in the updated version of the report, numerous incidents took place over the past weekend along the border between Israel and the Gaza Strip, including an attempt to place an improvised explosive device which is not mentioned in this or any other BBC report.

“There has been intermittent violence along the border since a ceasefire ended an eight-day conflict between Israel and militants in Gaza in November 2012.”

Of course excluding incidents in which fatalities occur, the BBC usually avoids reporting on attempts to damage or breach the border fence (such as this one which occurred on December 14th) and likewise refrains from reporting most of the missile fire from the Gaza Strip, such as this incident from December 15th.

The article closes with the following inaccurate statement:

“Israel considers Gaza a “hostile territory” after it was taken over by the anti-Israel Islamist Hamas movement in 2007.”

In fact, as has been previously noted here, the definition of the Gaza Strip as “hostile territory” by the Israeli government came three months after Hamas carried out its violent coup against the Palestinian Authority and took over the territory, with that declaration being specifically the result of Hamas’ escalated terrorist activity against Israeli civilians.

Three months later – on September 19th 2007 – in light of the escalation of terrorist rocket attacks against Israeli civilians originating in the now Hamas-controlled Gaza Strip – the Israeli government declared Gaza to be ‘hostile territory’.

“Hamas is a terrorist organization that has taken control of the Gaza Strip and turned it into hostile territory. This organization engages in hostile activity against the State of Israel and its citizens and bears responsibility for this activity.

In light of the foregoing, it has been decided to adopt the recommendations that have been presented by the security establishment, including the continuation of military and counter-terrorist operations against the terrorist organizations. Additional sanctions will be placed on the Hamas regime in order to restrict the passage of various goods to the Gaza Strip and reduce the supply of fuel and electricity. Restrictions will also be placed on the movement of people to and from the Gaza Strip. The sanctions will be enacted following a legal examination, while taking into account both the humanitarian aspects relevant to the Gaza Strip and the intention to avoid a humanitarian crisis.”