Say you’re a British Jew and work professionally as a journalist.

And, though you are highly critical of both Israel and many Jews, you still fancy yourself a progressive and anti-racist.  Indeed, you are buoyed by the fact that a mainstream “enlightened” British newspaper continues to publish your commentaries about Israel.

Again, supposing that you were such a “progressive”, ‘independent’ Jewish voice, what would your response be to an article written by Gilad Atzmon, an extremist who has advanced the following arguments?

You would completely distance yourself from the views of such an extreme racist, wouldn’t you?  Further, you would emphatically denounce his views at every opportunity, right?

Well, there is one British Jew (who contributes to the London Evening Standard and the Independent) claiming the mantle of anti-racism who, when encountering the commentary of Mr. Atzmon decided to tacitly endorse it.

If you’re entertaining the notion that Bar-Hillel’s re-tweet of Atzmon did not in fact ‘imply endorsement’, consider that Atzmon’s post (The Milibands, The BBC and The Proloteriat, Oct. 13) included passages which are quite consistent with Bar-Hillel’s own complaints about the stifling of debate about Israel.

Now, is this a legitimate concern or, is socialism, like Jewishness, beyond any criticism or scrutiny?

Of course this is a rhetorical question. Apparently in Britain 2013, any attempt to question the intellectual foundations, history and meaning behind Marxism and socialist thinking is reduced simply to ‘antisemitism’. So, it looks like Marxism and cosmopolitanism, like Jewishness and Israeli racism, have been merged into one vague entity removed from our public discourse, let alone criticism.

Now, here’s Bar-Hillel in an interview published in Haaretz:

Any criticism of the policies of Israel…is regarded as treason and/or anti-Semitism. Most papers and journals will not even publish articles on the subject for fear of a Jewish backlash.

Also of note, this was not a one-off between Atzmon and Bar-Hillel, as you can see in this ‘enlightened’ exchange in September: 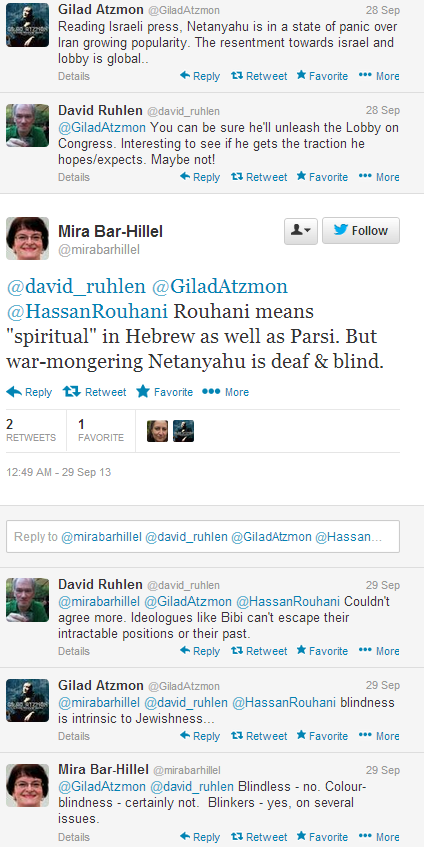 One of the most common deceits advanced by many Jewish critics of Israel is that, though they may demonize Israel and even reduce its Jewish citizens to grotesque caricatures, they are nonetheless passionately opposed to “real” antisemitism.

Though there are some Jewish critics of Israel who can credibly claim to walk such a moral tightrope, Bar-Hillel’s decision to engage (and legitimize) a vile neo-Nazi style anti-Semite like Gilad Atzmon demonstrates that she can no longer fancy herself a principled anti-Zionist and a principled anti-racist.

Her tolerance towards one of the most repugnant promoters of Jew hatred should, at the very least, disqualify her from contributing to any publication which takes its moral reputation seriously.