In the early hours of the afternoon of December 24th, twenty-two year-old Saleh Shukri Abu Latif – a civilian employee of the Ministry of Defence from the Bedouin town of Rahat in the Negev – was working on repairs to a section of the border fence separating Israel from the Gaza Strip located between Nahal Oz and Kfar Aza which had been damaged by the recent fierce storm. 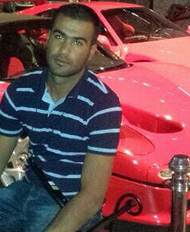 A bullet fired by a sniper in the Gaza Strip hit Saleh in the chest. He was evacuated by air to hospital in Be’er Sheva, but died of his wounds. The attack was reportedly claimed by the PRC.

The shooting of Saleh Abu Latif was preceded by days of security incidents along the same border fence including riots in which stones were thrown at Israeli soldiers on the other side of the border, attempts to breach the border fence and attempts to plant improvised explosive devices. Missiles were also fired from the Gaza Strip at Israeli civilian communities, including one which landed at a bus stop used by schoolchildren.

Despite days of rising tensions, the Hamas regime in Gaza failed to exercise control over its side of the border fence in order to prevent incidents from escalating and in accord with the terms of the ceasefire which came into effect after ‘Operation Pillar of Cloud’ in November 2012.

“All Palestinian factions shall stop all hostilities from the Gaza Strip against Israel including rocket attacks and all attacks along the border.”

Later in the afternoon of December 24th, the Israeli armed forces responded to the fatal sniper attack by targeting Hamas terror installations in the Gaza Strip including a concealed rocket launcher and a weapons manufacturing facility. According to Palestinian sources, a three year-old girl named Hala Abu Sbeikha was accidentally killed and other members of her family injured, although reports as to which family members differ, with some citing her father and some her mother and brother.

The report on the incident (amended several times) which appeared on the Middle East page of the BBC News website under the title “Two dead in Israel-Gaza violence” was sub-headed with the following ‘last-first’ description:

“A Palestinian girl is killed in a series of retaliatory Israeli strikes on the Gaza Strip, after an Israeli civilian was shot dead by a sniper.”

“A three-year-old Palestinian girl has been killed in a series of retaliatory Israeli strikes on the Gaza Strip.

The attacks came hours after an Israeli civilian was shot dead by a Palestinian sniper while repairing the border security fence.” 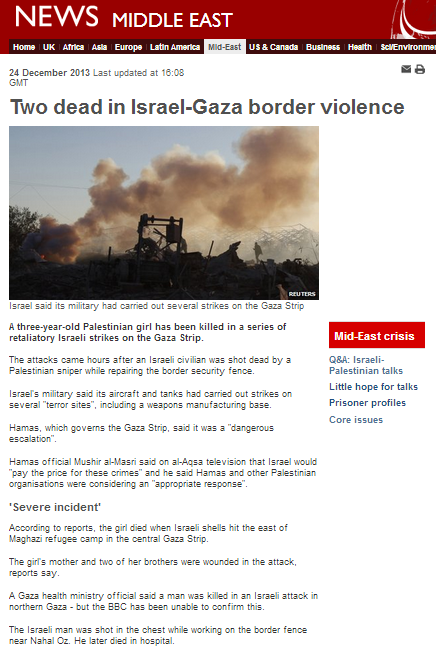 Saleh Abu Latif is not named in the BBC report and no significant additional information is provided apart from the two brief sentences below.

“The Israeli man was shot in the chest while working on the border fence near Nahal Oz. He later died in hospital.”

This BBC report has two main features. One is its promotion of equivalence (in the title, sub-heading and text) between a little girl accidentally killed in strikes on terror sites situated in areas inhabited by a civilian population and the deliberate murder of a civilian.

The other outstanding feature of this report is its whitewashing of Hamas’ responsibility for this incident and many others (including missile fire which the BBC has largely failed to report) under the terms of the November 2012 ceasefire, as indicated in the amorphous statement:

“There has been intermittent violence along the border since a ceasefire ended an eight-day conflict between Israel and militants in Gaza in November 2012.”

The article ends by once again misleading readers in relation to the term “hostile territory”.

As has also been the case in prior BBC articles relating to recent violent incidents, no serious attempt is made in this report to inform readers of the context of escalating numbers of terror attacks and security incidents emanating from the Gaza Strip and in Jerusalem and Judea and Samaria in recent months. By treating each of the random cases it does decide to report (usually those involving fatalities) as separate, unrelated incidents – and whilst ignoring many others – the BBC denies audiences a complete picture of the background of rising tensions in the region and the ability to understand Israeli reactions to incidents in their proper context.

The evening before Tuesday’s incident on the Gaza Strip border, a policeman directing traffic after a road accident was stabbed in the back by a Palestinian attacker near the community of Adam, north of Jerusalem. After surgery which included the removal of a damaged kidney, Rami Ravid’s condition improved. That incident was not reported by the BBC.