With the end of the year approaching fast, it is time to take a look at some of the corrections the BBC has made over the past year – and some it has not. 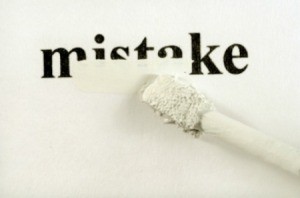 On the BBC News website, corrections can be divided into those made clear to audiences in a footnote and those which are ‘stealth’ corrections with no public acknowledgement of changes made to reports.

In the former category we have this year seen the BBC correct a statement on Egypt’s closure of the Rafah border after a complaint from a member of the public, the recognition by the BBC of the fact that the ‘Mavi Marmara’ was not an “aid ship” and a partial correction of whitewashed remarks made by the Iranian president.

A reader also secured corrections to articles misrepresenting the size of the Jewish community in Iran and another member of the public had a complaint regarding the BBC’s portrayal of remarks made by David Ward MP upheld. An additional complaint made by a member of the public resulted in the amendment of inaccurate claims about the partial blockade on the Gaza Strip.

In the category of unacknowledged corrections we have seen a change to a photograph of Mount Bental wrongly captioned as an “army position”, although interestingly, the revised caption has since been altered yet again as can be seen below.

An inaccurate claim that Israel opposed the P5+1 talks with Iran was quietly removed from the BBC News website, as was a claim that Arab Jerusalemites are uniformly not Israeli citizens. Inaccurate portrayal of the crimes of Palestinian prisoners was corrected following a complaint by a member of the public, but no footnote to that effect was added to the article concerned.

As we have noted here on several previous occasions, there is a pressing need for a dedicated corrections page on the BBC News website to which readers can refer in order to keep up with changes made to articles they are unlikely to re-read and all corrections and amendments should be clearly marked.

Complaints made by members of the public also produced changes to a BBC World Service programme which mislead audiences on the subject of the health of Palestinians in Gaza, a clarification added to a World Service interview by Lyse Doucet with Shimon Peres and acknowledgement of an inaccurate portrayal of the beginning of the Six Day War in Dan Snow’s ‘A History of Syria’ documentary on BBC Two.

On the Twitter front, a complaint regarding the misrepresentation of Tel Aviv as Israel’s capital was upheld, as was another one regarding a Tweet sent by Wyre Davies during ‘Operation Pillar of Cloud’ which misrepresented casualty figures.

There were also less satisfactory outcomes, including a complaint concerning an edition of ‘From Our Own Correspondent’ which revealed a quiet make-over done on an inaccurate synopsis.

This year the BBC’s Editorial Standards Committee ruled that translations are not obliged to be accurate and the BBC Complaints department continued to tie itself in knots over the use of the word terror.

Some of the more ‘creative’ responses to complaints from members of the public have included claims of a “smaller operation at the weekend“, the classification of anti-Israel political slogans on clothing as “a form of expression“, the claim that the term settler “most accurately and completely describes” a murder victim and condescending reassurances that the BBC ‘judges’ a terror attack on a toddler as “serious important [sic]” even though it refrained from reporting on the subject.

Other complaints from audience members have resulted in the complete failure to address the substance of a complaint, the whitewashing of Islamist antisemitism in Tunisia and the bizarre excuse that the word antisemitism is too long to be included in a BBC headline.

Hopefully, the complicated, user-hostile, time-consuming, self-regulating BBC complaints system will be one of the subjects examined in the DCMS “fundamental examination of the future of the BBC” due to take place next month.

Like Loading...
Tags from the story
BBC, BBC Complaints, BBC corrections, Complaints, Uncategorized
Written By
Hadar Sela
More from Hadar Sela
In the BBC’s reporting on the three rounds of prisoner releases to...
Read More