Though Guardian Jerusalem correspondent Harriet Sherwood consistently either ignores or plays down Palestinian terrorist attacks against Israeli citizens, she rarely misses an opportunity to provide free PR for even the most marginal BDS and delegitimization campaigns targeting the Jewish State. Indeed, in December she of course found time to write an 800 word feature on a largely symbolic boycott resolution by a small number of American academics. 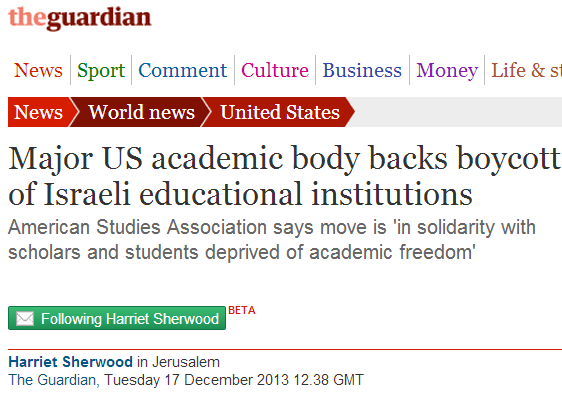 In attempting to impute significance to the motion, Sherwood wrote the following:

A prestigious US academic body has joined a growing movement to boycott Israel in protest at its treatment of Palestinians, in a move both welcomed and condemned in a bitterly divisive international arena…The American Studies Association (ASA), which has more than 5,000 members, is the most significant US academic organisation to back a boycott of Israeli educational institutions following a two-thirds majority vote.

Sherwood further contextualized the boycott motion as a victory amid the ongoing “international boycott drive against Israel”.

However, days before the ASA boycott vote was even cast, a more sober assessment on the potential anti-Israel resolution was published at this blog.

In his CiF Watch guest post on Dec 15, Jon (from the blog DivestThis!) argued that the ASA was setting itself up for failure, and that if the vote was to pass, “it will be a vote of an organization that has discredited itself, even before the rest of the academy marginalizes them still further by pointing out that…an academic boycott is the opposite of academic freedom“.

Then, following the vote, an interesting thing occurred: A remarkably large segment of American academia indeed took steps to marginalize the ASA and stand up for the principles of academic freedom threatened by the boycott resolution.

Thanks in part to the dogged efforts of tireless activists such as William A. Jacobson, the following is a current list (per Avi Mayer) of institutions whose presidents or chancellors have publicly rejected the ASA’s academic boycott of Israel:

One of the most eloquent denunciations of the boycott was issued by the President and Dean of Faculty of Trinity College in Connecticut:

To The Immediate Attention of the President of the American Studies Association:

Our Dean of the Faculty, Thomas Mitzel, and I wish to go on record renouncing the boycott of Israel on the part of the ASA.

Trinity once years back was an institutional member (we were then advertising for an open position), and apparently some members of our faculty are individual members. Were we still an institutional member, we would not be any longer after the misguided and unprincipled announcement of the boycott of the only democracy in the Middle East. The Dean and I oppose academic boycotts in general because they can so easily encroach upon academic freedom.

In this strange case, why the ASA would propose an academic boycott of Israel and not, for example, of Syria, the Sudan, North Korea, China, Iran, Iraq, or Russia escapes rational thought. Trinity has participated in the Rescue Scholar program since its inception; we have welcomed scholars from some of the most repressive countries on the planet, and it is inconceivable to us that we would ever be welcoming a Rescue Scholar fleeing Israel for political reasons.

As President of the ASA, you have tarnished a once distinguished association.

Moreover, there doesn’t seem to be a single university or major academic group in the U.S. supporting the boycott.  Indeed, anyway you parse it, if the goal of the ASA – and its anti-Zionist supporters – was to create momentum for the boycott movement, they’ve clearly failed miserably at their task.

You can chalk this up as yet another major BDS Fail.