Below is our regular end of month count of articles appearing on the Middle East page of the BBC News website according to the countries and territories defined by the BBC as making up that region per the profiles on that page.

Syria once again received the most coverage of all Middle East countries, followed by Egypt and then Iran. Israel was fourth in December in terms of the amount of coverage received, with Yemen in fifth place after a series of violent incidents there. No less plagued with violence is Iraq, but that country got even less exposure in December than the PA-controlled territories and the Gaza Strip, mostly due to coverage of Christmas in Bethlehem and the fact that reports on flooding in the Gaza Strip received extensive coverage, with one report appearing on the website for eleven consecutive days.

Thus, throughout the past ten months – despite the continued unrest prevalent in the Middle East and North Africa – Israel has consistently remained in the top five countries in terms of coverage on the BBC’s website out of the total of twenty countries and two territories which it defines as making up the Middle East.

The Freedom House 2013 survey of political rights and civil liberties classifies two-thirds of the countries and territories defined by the BBC as making up the Middle East as “not free”. 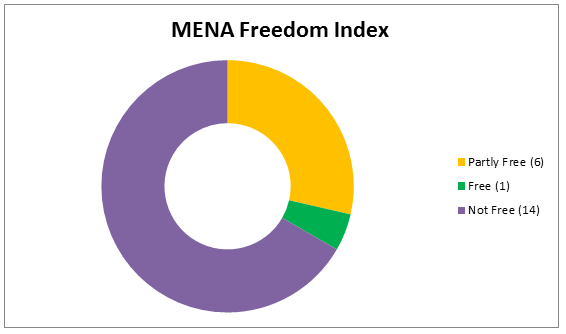 “A Partly Free country is one in which there is limited respect for political rights and civil liberties. Partly Free states frequently suffer from an environment of corruption, weak rule of law, ethnic and religious strife, and a political landscape in which a single party enjoys dominance despite a certain degree of pluralism. “

“A Not Free country is one where basic political rights are absent, and basic civil liberties are widely and systematically denied. “

The one country defined as ‘free’ is Israel.

“A Free country is one where there is open political competition, a climate of respect for civil liberties, significant independent civic life, and independent media.”

One might perhaps expect that at least two of the BBC’s public purposes would have the effect of focusing its  coverage on countries which do not have independent media and on informing BBC audiences of issues relating to the absence of political and civil rights in far too many Middle Eastern countries. But is that actually the case?

The data we have gathered here over the last ten months shows that in that period of time Syria (not free) has received the most coverage on the BBC News website – almost exclusively in relation to the civil war which has been raging there for nearly three years. The country receiving the second most coverage was Egypt – again mostly due to the political turmoil there. The third widest coverage was given to the one and only country in the Middle East defined as ‘free’: Israel.

If we compare the BBC News website’s coverage of Israel to that of the ‘partly free’ countries it defines as making up the Middle East we see that with the exception of Egypt, Israel received more coverage than all of the other five countries put together.

Comparison of the coverage of Israel with that of the fourteen ‘not free’ countries and territories shows that with the exception of Syria, Israel received more coverage than all the other thirteen countries/territories.

One issue arising from the 2012 report commissioned by the BBC Trust on the subject of the ‘Arab Spring’ was that of excessive focus on one particular Middle East issue.

“Although the review does not cover the period before December 2010, some BBC executives volunteered the view that in that period Middle East coverage focused too intensively on the Arab-Israel conflict, at the expense of the wider Arab world, so that the public was more surprised by the outbreak of the “Arab Spring” than it need have been.”

It would seem that with regard to the BBC News website at least, little has changed since then, with coverage of most Middle East countries – including some of those named in that report – still very sparse indeed and disproportionate focus on the one free country in the region.