Did the Israeli government just back the annexation of the Jordan Valley?!

Well, if you were to read the Guardian’s original headline yesterday accompanying a report by Harriet Sherwood, you’d be forgiven for believing that such an extreme policy was indeed backed by Netanyahu’s coalition.

Here’s a cached page of the original: 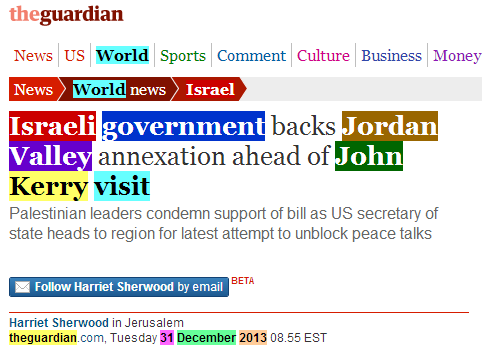 However, as Guardian editors evidently soon realized, the text of Sherwood’s article doesn’t support the sensational title.  All that had occurred was a symbolic vote in favor of annexation by eight ministers within the Ministerial Legislative Committee.  Dissenting ministers will appeal the vote, which places the matter in the hands of Netanyahu, who opposes the resolution and has reportedly agreed to dismantle all Israeli settlements in the Jordan Valley.  Indeed, the legislation will almost certainly be killed before it even reaches the full Knesset.

A few hours after the Guardian article was published, the title was changed to more accurately reflect reality: 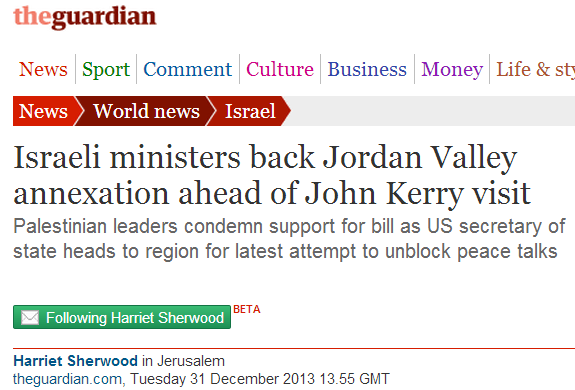 Despite the improved headline, it’s still remarkable that the Guardian’s Jerusalem correspondent devoted an entire article (and over 700 words) to a symbolic vote on a resolution which will almost certainly never be voted on, yet alone become law.

If Sherwood wanted to focus on actions which undermine trust between the two parties, she could have devoted a column to the hero’s welcome offered by the PA for the 26 newly released terrorists – and Mahmoud Abbas’s characterization of such murderers as Palestinian role models.

But, of course, stories on Palestinian incitement and the glorification of terror – actions which are clearly inimical to peace – would not serve to advance the Guardian narrative of the conflict.