Like many other Western countries including the United States, Australia and EU member states, Israel is facing the issue of illegal migrants – specifically the issue of an estimated 53,600 people who have illegally entered Israel since 2006, some 66% of whom originate from Eritrea and 25% from Sudan.

In September 2013 nine judges presiding at Israel’s High Court of Justice declared an amendment to the Law for the Prevention of Infiltration passed in 2012 to be unconstitutional. Later last year, a fourth amendment to that law was passed by the Knesset to replace the one rejected by the High Court. Under the new amendment the permitted period of detention was reduced to one year, financial incentives for those migrants willing to voluntarily repatriate were more than doubled and an open detention facility named Holot was inaugurated.

Like its predecessor, the fourth amendment to the law is also the subject of a petition to the High Court of Justice by interested parties, including various NGOs. The court has yet to give its ruling, but in the meantime the public relations campaign orchestrated by those interested parties continues.

Part of that campaign is a series of demonstrations, strikes and marches which began in December and continue to the present day. On January 5th, some 15,000 demonstrators gathered in Tel Aviv and the BBC News website produced an article on the subject titled “African migrants in Israel protest in Tel Aviv” which appeared on its Home, Africa and Middle East pages. 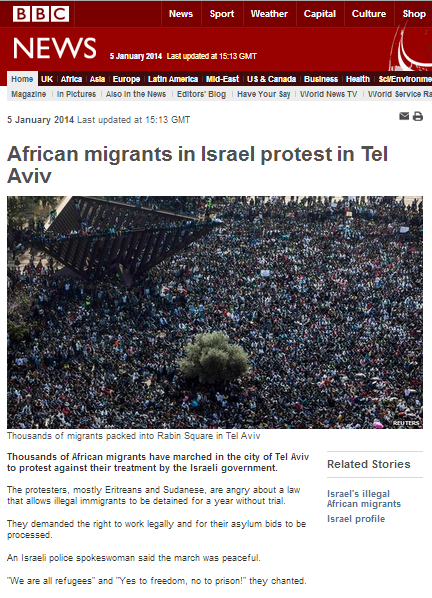 An integral part of the debate surrounding this issue is one of language. Supportive journalists and campaigning NGOs and individuals prefer the use of terms such as ‘refugees’ and ‘asylum seekers’ whilst others employ the terms ‘infiltrators’ or ‘economic migrants’. The BBC’s report mostly uses the term ‘migrants’, but also provides space for the presentation of other descriptions.

” “We are all refugees” and “Yes to freedom, no to prison!” they chanted.”

“The migrants, some of whom have been in Israel for years and have taken low-paid jobs, say they are all refugees who have fled persecution and conflict back home in Eritrea and Sudan.”

At the other end of the debate, the writer of this article apparently felt the need to introduce a caveat to the use of the word “infiltrated”, despite the fact that the people concerned entered Israel illegally via its border with Egypt.

“An Israeli official said the authorities would continue to deal with people who, as she put it, had infiltrated Israel, adding that more than 2,600 had agreed to leave voluntarily last year.” [emphasis added]

Commentary in this report is provided by Richard Galpin, who makes no effort to adequately clarify the issue’s legal and social background to readers.

“The BBC’s Richard Galpin in Jerusalem says the protest was prompted by the new law on detention, which had dashed hopes that a recent crackdown would be halted.”

Neither is any attempt made to balance the reported claim that the demonstrators “are all refugees”, despite the fact the BBC is clearly aware that is not universally the case, as noted in one of the ‘related articles’ recommended to readers – a 2010 report by Wyre Davies – in which he wrote:

“While some migrants say they are political refugees, many, like the dozens of men we later came across in the town of Eilat, are clearly looking for employment.”

Readers of this superficial report will come away with no greater understanding of the issue’s background or context because, in fact, the report is little more than amplification of an ongoing public relations campaign by NGOs the BBC elects not to name.

But just in case visitors to the BBC News website did not quite get the message, the following day – January 6th – two filmed reports (also shown on BBC television news) on the exact same subject appeared on that website. One is a studio interview with the BBC Jerusalem Bureau’s Kevin Connolly.

In a remarkable exhibition of deliberate inaccuracy rooted in political motivation, Connolly tells audiences that the concept of Israel as the Jewish state is an invention of the current government:

“There’s a special factor, I think, in all of this in Israel which doesn’t really apply in other countries and that’s the fact that the government looks at non-Jewish immigration – legal or illegal – as a threat to the Jewish nature of the state. Israel was created specifically to be a Jewish state in the eyes of the Netanyahu government and anything which carries some sort of demographic threat to that identity in the long term, like the influx of non-Jewish African migrants, is seen as a threat to that special status. So Israel doesn’t just look at illegal immigration like this through the same prism as other countries like the countries of Western Europe or the United States; it also looks at it through that very particular prism and sees a very particular threat to its own nature.” [emphasis added]

The second filmed report is by Richard Galpin.

After opening footage of chants of “we are refugees”, Galpin tells audiences:

“This is the demonstration here, one of the demonstrations here, on the seafront in Tel Aviv and as you can see, several thousand people have already gathered here. We’ve seen waves of people marching in and obviously people here really determined to get the message across to the international community, because this demonstration – if we just swing the camera over there – this is in front of the US embassy. That fortress-like building here, that is the US embassy and all these people here they want to get a simple message across to the international community – that they want pressure to be put on the Israeli government to change the way that they say they’re being treated by the Israeli authorities. Now a lot of these people are saying that they’ve been detained, they’ve been put in prison, and they fear now that – although they are here now – that ultimately they could end up in prison and be held there indefinitely under a law which was passed just last month in fact. So this is why we’re seeing these demonstrations now – the people are really concerned about what’s going to happen and feel now is the time that the international community needs to act so that the laws which the Israeli authorities are applying to people here, stopping them getting asylum effectively and trying to get them to leave Israel, that those laws are changed.”

Once again, Galpin gives a banal and inaccurate account of the legal issues and makes no attempt whatsoever to provide audiences with other views on the subject – not least those of the people of the neighbourhoods of south Tel Aviv where the majority of those 53,600 migrants live.

Clearly the recent extensive criticism of the intentional departure from standards of impartiality in BBC coverage of the subject of immigration in the UK has not prompted the corporation to be any more conscientious with regard to the impartiality and accuracy of its coverage of similar issues in other countries.