h/t to the ‘global network’ of CiF Watchers

A commendable essay by Hila Shachar was published at ‘Comment is Free’ yesterday (Jan. 27) titled ‘The Holocaust is not your metaphor to use in modern political debates‘ – one in a series of appropriate articles which appeared in the Guardian on International Holocaust Remembrance Day, commemorated annually on the anniversary of the liberation of Auschwitz.

Here’s an excerpt from the essay:

In thinking about what it actually means to honour the victims, I’ve come to the conclusion that one of the best ways to do this is to continue reminding ourselves that those victims were individual human beings. This should seem obvious, right? And yet, the victims of the Holocaust continue to be appropriated as political metaphors and dehumanised in the process.

Specific examples can be both well-meaning or purposefully disrespectful. Take the animal rights group PETA, which is known for its insensitive shock tactics when it comes to its marketing. In 2004, the group created the Holocaust on your plate campaign, using images of emaciated victims of Nazi concentration camps and comparing meat-eaters and those working in the meat-production industry to Nazis. I hope I don’t need to explain why this is wrong. But as I’ve been watching Facebook and Twitter conversations about the Tony Abbott government’s treatment of refugees degenerate into comparisons with the Nazis, I have to wonder if perhaps I do.

Recently, I came across this Facebook post that uses an image of a child who was killed in Auschwitz next to an image of a baby who was born in Christmas Island detention centre. It’s highly emotive and also, in my view, highly unethical. Using images of those who were killed by the Nazis to make a point about the Australian government’s policies is demeaning to those who died. It is essentially saying that their deaths are not to be remembered for their own sake, but rather because they are useful tools as points of reference and comparison in contemporary political debate. It turns Holocaust victims and survivors into concepts, decontexualised imagery and generalisations, and erases their individuality as human beings – even when the intentions behind it are sincere and well-meaning.

As part of our mission, we often monitor reader comments below the line of ‘CiF’ essays to see if moderators promptly remove antisemitic commentary (consistent with their own stated ‘community standards) and, more generally, to get a barometer of the hate often elicited by any Guardian or ‘CiF’ entry which focuses on Jews or Israel.  Here are just a few samples of the less than enlightened reader responses to Shachar’s essay:

Israel-Nazi comparison: 36 ‘Recommends’ and NOT deleted by ‘CiF’ moderators: 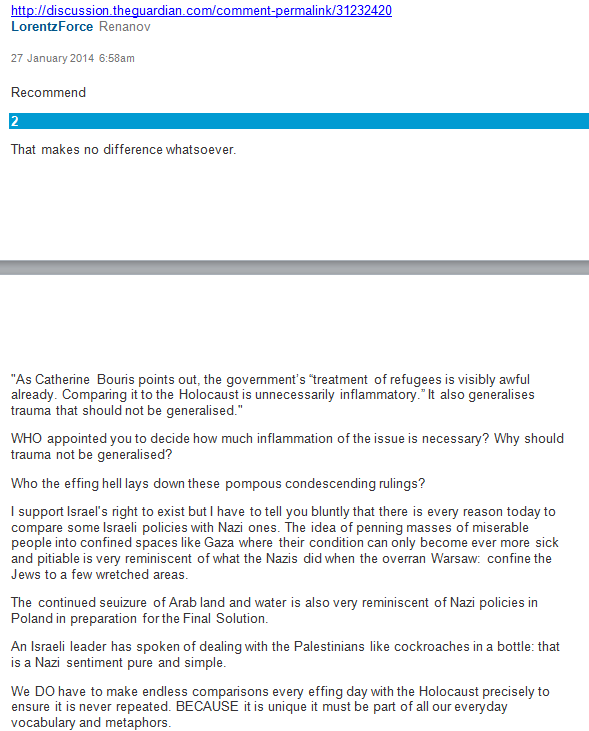