No, neither the Israeli prime minister nor his ministers labeled John Kerry an anti-Semite.

However, here’s the photo and caption used to illustrate a Feb 2nd story at The Telegraph written by their Israeli correspondent Robert Tait: 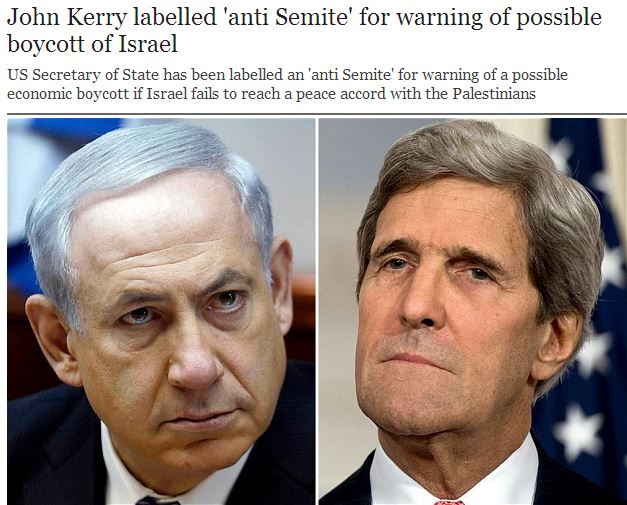 First, note that the headline is “John Kerry labelled ‘anti Semite’ for warning of possible boycott of Israel”. Then, there are two big pictures: one of Netanyahu and the other of Kerry, which some casual readers may initially interpret as indicating that Bibi was the one who called Kerry an anti-Semite.  (Indeed, the Telegraph’s Facebook post uses this same hook to inspire interest in the story.)

Additionally, note that the photo caption claims that “Ministers in Benjamin Netanyahu’s cabinet accused John Kerry of effectively endorsing “anti-Semitic” efforts to impose sanctions on Israel”.  This claim is repeated in the opening passage of the story.

However, this too is misleading.

Here’s what Tait writes, after quoting Kerry’s warning about the potential risks concerning boycotts if a peace accord isn’t reached.

Yuval Steinitz, the intelligence and strategic affairs minister and a close ally of Mr Netanyahu, the Israeli prime minister, said America’s top diplomat was “holding a gun to [Israel’s] head”.

“The things Kerry said are hurtful, they are unfair and they are intolerable,” Mr Steinitz told reporters.

“Israel cannot be expected to negotiate with a gun to its head when we are discussing the matters which are most critical to our national interests.”

Naftali Bennett, the industry minister and leader of the far-Right Jewish Home party, said: “We expect of our friends in the world to stand by our side against the attempts to impose an anti-Semitic boycott on Israel, and not to be their mouthpiece.”

His comments were echoed by Adi Mintz, a senior official in the Settler’s Council, who accused Mr Kerry of “an anti-Semitic initiative”.

“The anti-Semites have always resorted to a very simple method – hit the Jews in their pockets,” he told Israel’s Channel 10 TV station.

Mr Netanyahu was more restrained, telling Sunday’s cabinet meeting that efforts to impose a boycott were “immoral and unjust” and doomed to fail.

So, based on the quotes used by Tait, only one minister, Bennett, even used the word “anti-Semitic” to characterize boycott efforts, and the only one who actually accused Kerry of antisemitism was Adi Mintz, an official in the Settler’s Council.  Mintz is not a minister.

Contrary to the strong suggestion of the headline, photo and subsequent text, neither Bibi nor any of his ministers labeled Kerry an “anti-Semite”.  But, of course, a headline soberly noting that “an official at the Settler’s Council” labeled Kerry an anti-Semite would be a lot less likely to elicit the interest of Telegraph readers or those who casually peruse Facebook, Twitter and RSS feeds looking for interesting content.

The Telegraph story of course also fits neatly into the frequently heard criticism about those ‘pesky Israelis always crying about antisemitism’ to stifle criticism of Israel – what’s known as the Livingstone Formulation.

Finally, it’s quite interesting that Tait writes the following near the end of his article, quoting a US State Department spokesperson responding to the row:

“[Mr Kerry] expected opposition and difficult moments in the process, but he also expects all parties to accurately portray his record and statements.”

Yes, and news consumers expect newspapers to accurately portray statements by political leaders and not – like unserious British tabloids – use misleading photos and captions to falsely impute drama to relatively mundane stories.

0 replies on “Did Bibi or his ministers label John Kerry an “anti-Semite”?”