The February 13th edition of ‘From Our Own Correspondent’ – broadcast both on Radio 4 and on the BBC World Service – was titled “Come to Sunny Gaza!”. 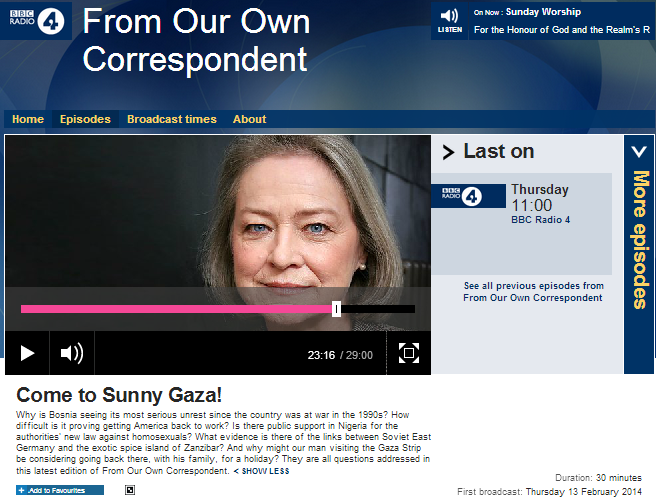 The programme can be heard here (with the relevant section beginning at about 22:48) or here. A written version of the same report by Simon Cox also appeared in the ‘Features & Analysis’ section of the BBC News website’s Middle East page under the title “Discovering Gazans’ resilient side“. 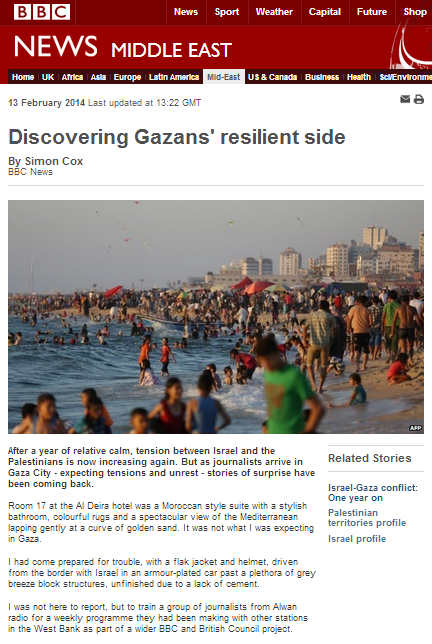 Listeners to the audio version may well have been quite bowled over by the fact that presenter Kate Adie actually mentioned the escalation in missile fire from the Gaza Strip since the beginning of the year in her introduction to the item and also by the fact that Cox does not stick entirely to the ‘Gaza doom and gloom’ route so well-trodden by herds of BBC correspondents before him.

All the same, he offers no context or explanation for statements such as:

“I had come prepared for trouble, with a flak jacket and helmet, driven from the border with Israel in an armour-plated car past a plethora of grey breeze block structures, unfinished due to a lack of cement.” [emphasis added]

“Rawan, my young translator, explained how the electricity was only on for eight hours a day so work, shopping, everything had to be crammed into this brief window.” [emphasis added]

“You need this kind of ingenuity when half the population is unemployed.” [emphasis added]

In fact, the PCBS cites an unemployment rate of 31.0% – not 50% as Cox claims – during the first quarter of 2013 and of course that is influenced by the fact that only 17.1% of women participate in the labour force.

But the less obvious (and much more interesting) aspect of this report – which Simon Cox does not seem too keen to expand upon – is the one reflected in this paragraph:

“I was not here to report, but to train a group of journalists from Alwan radio for a weekly programme they had been making with other stations in the West Bank as part of a wider BBC and British Council project.”

BBC audiences might at this point have been interested in some context regarding the media scene in the Gaza Strip post the 2007 violent coup carried out by Hamas. The fact that media outlets associated with political and terrorist groups other than Hamas and the Palestinian Islamic Jihad were quickly forced to close down, revise their content or relocate is, after all, a relevant factor – particularly perhaps for audience members who fund both the BBC and the registered charity the British Council via Foreign Office grant-in aid funding.

“The majority of media outlets in Palestine are based in the Gaza Strip. Since June 2007, Hamas loyalists have either shut down or assumed control of these outlets. As of August 2007, only two TV stations are currently available: Hamas’s Al Aqsa and the Islamic Jihad’s Sawt Al Aqsa, and two radio stations: Al Qur-an Al-Kareem which is run by Hamas’ Religious Affairs ministry, and Radio Alwan which is considered a pro-Hamas station.” [emphasis added]

In other words, only media organisations run or tolerated by Hamas can operate.

“Today [Ed. – August 2007] there are seven radio stations broadcasting from the Gaza Strip, most of them affiliated with Hamas and Islamists: Hamas’ Radio Al-Aqsa, the Palestinian Islamic Jihad’s Radio Al-Quds, four independent stations (Sawt al-Iman (The Voice of Faith), Radio al-Manar, Radio ‘Alwan and the entertainment station, FM-Gaza). They all broadcast, as does Radio al-Qur’an al-Karim, which belongs to the Palestinian ministry of Islamic endowments.” [emphasis added] 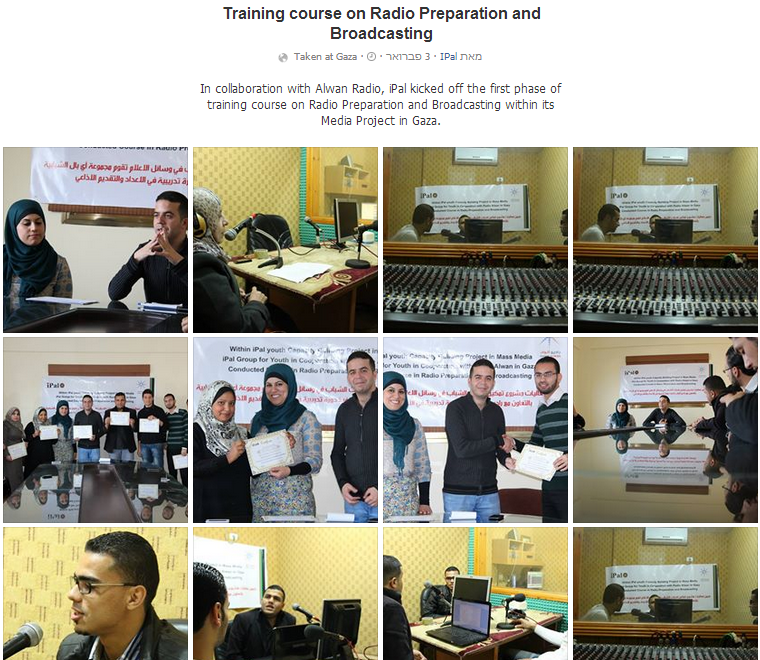 And what is iPal’s raison d’etre? Well we can learn more about that via the Anna Lindh Foundation website where, in among the jargon and buzz words and in addition to “collaboration with Alwan Radio” and “collaboration” with the Hamas supporting organisation Islamic Relief which Israel designated in 2006, we find the following among iPal’s stated activities:

“BDS Movement: building workshops about the BDS as an introduction for the youth in Gaza to let them know more about this campaign and the importance of it and how it plays an effective role in the Palestinian struggle for Justice and also to get them a part in some BDS activities in Gaza.”

iPal’s “coordinator in Gaza” Abeer Abu Shawish also works for the Arab Centre for Agricultural Development (ACAD) and in November 2013 she was to be found organizing on its behalf “a conference on the Boycott, Divestment and Sanctions (BDS) movement against Israeli apartheid, colonization and occupation” at which “Zaid Shuabi, outreach officer of the Palestinian BDS National Committee (BNC), gave a report by Skype from the West Bank.”.

However, Radio Alwan is far from being the sole organization with British Council and BBC links which directly or indirectly supports and promotes the Boycott, Divestment and Sanctions movement which aims to delegitimize Israel into extinction.

As we noted here only recently, the British Council has a “partnership” with the BDS supporting ‘Palestine Festival of Literature’ – or PalFest. Among the British Council’s partners in Israel is the Mossawa Centre and among its partners in the Palestinian controlled territories are the Maan Development Centre, Miftah and ‘Palestinian Vision‘ which employs a media spokesman who is a veteran of the BDS campaign and in its 2010 annual report (scroll down for English) noted inter alia that its activities include the organization of quiz nights with the theme “Judaizing of names in the city” [Jerusalem] and included the illustration below. 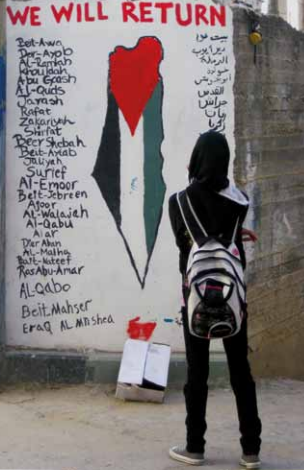 In addition to Miftah and ‘Palestinian Vision’, the British Council’s partners in its ‘Tajaawob‘ project include Oxfam and the BBC’s own charity ‘BBC Media Action’ which gets over 40% of its funding from departments of the British government.

The same British government claims that it does not support the BDS movement.

“In correspondence with NGO Monitor, the UK Foreign and Commonwealth Office (FCO) stated: “The UK Government does not support the BDS movement,” and “we have been very clear that the boycotts movement is not productive… it could be deeply corrosive.” “

However, the same government department which wrote those words funds both the British Council and departments of the BBC which do partner organisations that directly or indirectly oppose a two-state solution to the Arab-Israeli conflict and work towards the elimination of the Jewish state.

Isn’t it odd that the BBC’s “investigative journalist” Simon Cox should have missed all that? After all, UK-based members of the BBC’s audience might like to be enlightened as to what lies behind some of the projects and organisations which their taxes and obligatory payments are actually funding.

0 replies on “The BBC, the British Council and BDS: what Simon Cox didn’t report”