As was noted in the first part of this post, on February 27th the BBC’s local station Radio Lancashire used the occasion of the publication of a report on the same morning by Amnesty International to provide a platform for a political activist associated with Amnesty and the Hamas-linked ISM to promote anti-Israel propaganda.

Later the same afternoon, a written report unequivocally titled “Israeli troops ‘using excessive force’ in West Bank” appeared on the Middle East page of the BBC News website. The 743 word article (including sub-headings and photo captions) is composed of 421 words presenting Amnesty International’s views and supporting information added by the BBC, 148 words presenting the IDF’s response to the AI report and 153 words describing an unrelated incident which took place in Bir Zeit on February 27th in which a wanted PFLP terrorist was killed.

In addition to its extensive quotations from the AI report – which relates exclusively to incidents in Judea & Samaria – the BBC article adds some extra context-free information of its own which does nothing to clarify to readers the fact that the latter half of 2013 saw a sharp rise in Palestinian terror attacks.

“According to the UN, 27 West Bank Palestinians were killed by Israeli forces last year, nine more than the totals in 2011 and 2012 combined.

The BBC article provides a link to the AI report and states:

“Amnesty documented the killings of 22 Palestinian civilians in the West Bank last year, of which it said at least 14 were connected to protests. In all of the cases, those killed did not appear to have posed a direct and immediate threat to life, it said.” [emphasis added]

” “The frequency and persistence of arbitrary and abusive force against peaceful protesters in the West Bank by Israeli soldiers and police officers – and the impunity enjoyed by perpetrators – suggests that it is carried out as a matter of policy,” Amnesty’s Middle East and North Africa Director Philip Luther said.” [emphasis added]

Clearly, BBC audiences are being herded towards acceptance of a paradigm of non-threatening ‘peaceful protest’ by Palestinians and excessive use of force by Israeli security forces, which is a hallmark of the AI report itself. But just how many of those ‘peaceful protests’ were actually as Amnesty and the BBC are trying to portray them?

The Amnesty International report is notable for the fact that the cases it profiles rely upon anecdotal evidence provided by family and friends of the deceased, along with information gathered from various media outlets and politically motivated NGOs. Some of those cases were also reported by the BBC during 2013.

The Oxford dictionary defines a protest as “[a]n organized public demonstration expressing strong objection to an official policy or course of action” and a peaceful protest is obviously one which does not include violent acts on behalf of the protesters. However, examination of examples of the cases highlighted by Amnesty International shows that many of those incidents were neither protests nor peaceful.

The AI report includes the case of Mutaz Sharawnah who was killed on July 2nd 2013 in Dura. As a BBC report on the incident stated at the time: [emphasis added]

“Moataz Sharawna, 19, died after being shot and, according to Palestinians, subsequently hit by an army vehicle.

It followed confrontations between stone-throwing youths and soldiers in the village of Dura, south of the city of Hebron.

The Israel military said it was investigating the circumstances of Mr Sharawna’s death.

A military spokeswoman confirmed that a young Palestinian man was shot.

A Palestinian witness told the BBC that Mr Sharawna had been throwing stones and then climbed on top of an Israeli army jeep.

He said that soldiers fired at him and he was then run over by another army vehicle.”

Clearly Sharawnah was not participating in ‘peaceful protest’ at the time of his death, but in a violent riot.

Another case profiled in the AI report is that of an incident on August 26th 2013 in Qalandiya in which three Palestinians were killed – Jihad Aslan, Yunes Jahjouh and Rubin Abdal Rahman Zayed. During that incident, Border Policemen trying to arrest a terror suspect were attacked by some 1,500 rioters with rocks and fire-bombs. Video footage of what Amnesty International (and apparently the BBC) would have members of the public believe was a non-threatening ‘peaceful protest’ can be seen here. 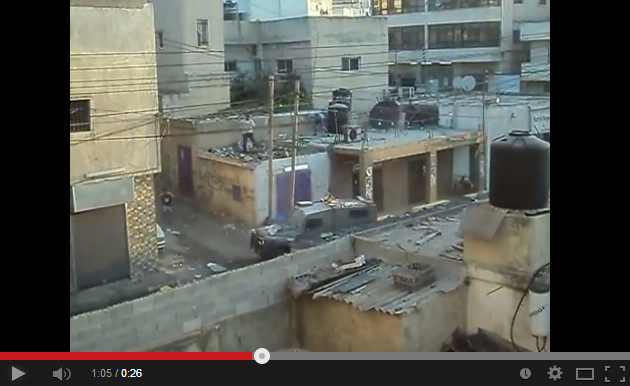 An additional case appearing in the AI report also took place in August 2013 when Israeli forces attempting to arrest a terror suspect in Jenin were attacked by a mob and Majd Lahlouh and Karim Abu Sbeih were killed. As the BBC reported at the time: [emphasis added]

” “During the [raid], shots were fired at the forces and improvised explosive devices and rocks were hurled at the security personnel, injuring two soldiers,” a military spokeswoman told AFP news agency.

The military said troops returned fire, killing the Palestinian and wounding the others.”

Seemingly then, AI’s definition of a ‘peaceful protest’ includes one at which shooting takes place and of course it should be noted that – according to Amnesty’s claim uncritically repeated by the BBC – shots fired and IEDs thrown at soldiers apparently do not constitute “a direct and immediate threat to life”.

Two additional names appearing in the AI report are those of Naji Balbesi and Amer Nassar who were killed on April 3rd 2013 when they attacked an army post near Einav with fire-bombs.

The AI report also includes the case of Hamas operative Mahmoud Adel Fares al Titi who was killed on March 12th 2013 in al Fawar when soldiers in pursuit of suspects who had thrown petrol-bombs at Israeli motorists on Route 60 were attacked by rioters with rocks and Molotov cocktails when their vehicle broke down. Video footage of that ‘peaceful protest’ can be seen here and here.

Those familiar with Amnesty International’s long-standing anti-Israel campaigning and its dubious modus operandi will of course not be surprised to see its politically motivated misrepresentation of violent riots and deliberate attacks on security personnel as ‘peaceful protest’ carried out by Palestinians armed only with placards. The BBC, however, should – in theory at least – be a different kettle of fish

Embarrassingly though, its eager self-conscription to the promotion and amplification of the political messaging which underlies the Amnesty International report has apparently caused the BBC to forget that it has previously reported on several of the violent incidents which form the basis of a deeply flawed and blatantly political report supposedly pertaining to Palestinians killed at ‘peaceful protests’.