As has been frequently documented on these pages, the BBC News website’s coverage of stories relating to Israel is consistently high in comparison to coverage of most other countries in the region. One factor which contributes to that anomaly is the editorial decision to cover stories which are more suited to local journalism than to the category of news which will interest international audiences.

An example of that peculiarity was seen recently when Israel’s Knesset passed three new laws in one week. The first of those was the Governance Law, which brings about significant changes to the electoral threshold (raising it from 2% to 3.25%), limits the number of government ministers and deputy ministers, abolishes the status of ‘minister without portfolio’ and changes the terms for votes of no confidence in a ruling government.

The BBC did not cover that bill’s passing in the Knesset and indeed there was little reason for it to do so as it relates to domestic Israeli issues. Another law which did not receive any coverage from the BBC is the Referendum Bill, according to which any proposal to relinquish sovereign territory must be brought to public referendum. Although that law does have implications for any potential future ‘land for peace’ deals, the BBC apparently chose to regard it as a domestic issue too.

In between those two laws, another one – the Equal Service Bill – was also passed. Oddly, although that too is a domestic Israeli issue relating to the draft law, the BBC did elect to cover the story in an article titled “Israel ends ultra-Orthodox military service exemptions” which appeared on the BBC News website’s Middle East page on March 12th. 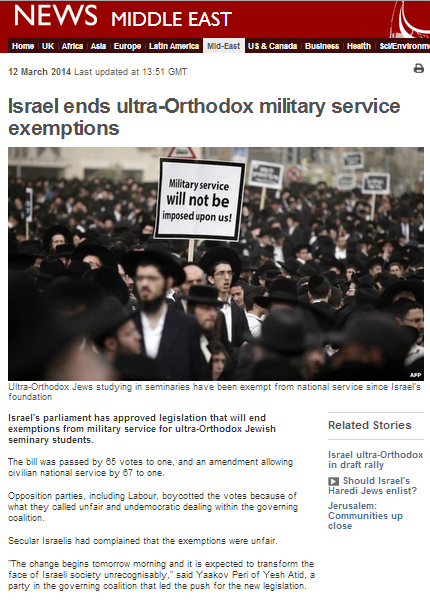 The same topic has also been the subject of quite a few past BBC items, with Yolande Knell having produced both written and filmed reports earlier in the month on the subject of a protest against the law, a previous demonstration in 2013 having also been covered in both filmed and written reports and the website’s business section also getting in on the action.

Quite why the BBC should select this particular law for coverage whilst ignoring the other two passed at the same time is, to this writer at least, a mystery. But if it is going to go down that route, then at least the paragraph below from the BBC’s report should have been properly explained to the majority of readers for whom internal Israeli politics are as clear as mud.

“Opposition parties, including Labour, boycotted the votes because of what they called unfair and undemocratic dealing within the governing coalition.”

In fact, the opposition’s decision to boycott the votes applied to all three laws, but the BBC does not make that clear. Some background to that opaque sentence appears here, here and here.

“The opposition boycott was prompted by the government’s tabling of three key laws simultaneously as a ‘package deal,’ as well as its extraordinary decision to limit debate on each of the three bills, thus preventing opposition filibusters.”

Notably, the BBC report only relates to parts of the content of the Equal Service bill and completely ignores the other two laws, thus restricting audience understanding of why the prospect of the use of obstructionist tactics in the three legislative debates by some members of the opposition would be considered a possibility.

“Under the law, Male service in the IDF will be reduced from 36 months to 32 and the numbers of ultra-Orthodox men conscripted into the army will be raised gradually on an annual basis until June 2017. […]

From that point on, 5,200 ultra-Orthodox men will be conscripted into the army or national service every year. The government can increase the target figure, but not reduce it.
From 2017, the law will be legally binding and draft dodgers will be liable for punishment, including imprisonment. In addition to legal proceedings, they will also be liable for economic sanctions, by means of budget cuts for yeshivot [religious seminaries] that don’t meet targets. Institutions that do meet targets will receive additional budgets.”

And of course if the BBC is going to venture into the briar patch of Israeli domestic politics, then it should also have explained to audiences which other “opposition parties” besides Labour – which is the only one it names – took part in the boycott of the debates and votes on the three laws and why.

“The Labor Party caucus in the Knesset went ahead with its planned boycott of the vote, despite announcing that it supported the [Equal Service] law. In a caucus vote on the boycott on Tuesday night, it transpired that five members of the caucus, including Shelly Yacimovich, Omer Bar Lev and Iyzik Shmuli, were in favor of voting for the law.

Several caucus members have complained in recent days about what they say is the over-tight embrace of the ultra-Orthodox parties and have expressed concern that the joint boycott could damage the Labor Party in the eyes of its supporters. In the end, the party decided to maintain the boycott while expressing its support for the law – despite concerns about two clauses.”

Yes, this is a much more complicated story than the BBC’s trite slogan about “unfair and undemocratic dealing within the governing coalition” would have audiences believe.

If the BBC is going to ‘do’ domestic Israeli politics, it obviously has a steep learning curve to climb before that reporting can be considered accurate, impartial and – as comes across at present – more than a means of conveying its own political messaging to audiences.