“Palestinians killed in Israeli raid” was the lead headline on the BBC News website’s Middle East page on the morning of March 22nd 2014. The sub-header also omitted any mention of what those Palestinians were doing when the incident which is the subject of the report took place.

“Israeli security forces shoot dead at least three Palestinians during an arrest operation in the Jenin refugee camp in the West Bank.”

The article’s opening paragraph also ignores the actions of the Palestinian casualties.

“Israeli security forces have shot dead at least three Palestinians during a raid to arrest a Hamas member in the Jenin refugee camp in the West Bank.”

Readers have to proceed to the third paragraph (out of a total of six) in order to discover that the incident actually began when a wanted member of a terrorist organization opened fire on Israeli troops trying to arrest him.

“It [the IDF] said he barricaded himself in his home and opened fire, injuring two soldiers, and was then shot dead.”

“The terror suspect, Hamas member Hamza Abu Aleija, planned to attack Israelis in the West Bank and Israel, according to suspicions.

“He’s one of the most important terror suspects that we’ve been looking for,” a security source told The Jerusalem Post.”He’s escaped several past attempts to apprehend him.”

As Counter-Terrorism Unit members approached the house to make an arrest, shots were fired at them. The special forces stopped their approach, and the army used loudspeakers to call on all of the residents to evacuate the building.

“Everyone left the home other than the suspect. We ensured there were no family members inside,” the source said. Meanwhile, Abu Aleija continued firing bursts of gunfire at security forces, and Palestinian gunmen from the area arrived at the scene, opening fire on the infantry soldiers who were securing the operation.

The Counter-Terrorism Unit sent a dog into the home, and the animal was shot dead by Abu Aleija.

The wanted suspect then came out of the home, shooting as he went. He struck two members of the Counter-Terrorism Unit, injuring them lightly. The unit returned fire, killing him on the spot. Meanwhile, soldiers securing the operation returned fire at the gunmen attacking them, killing two.”

The wanted man’s name is not mentioned in the BBC report and the only clue given to readers as to why he was being arrested comes in the form of the following terse sentence:

“The Israeli military said it wanted to arrest a man accused of plotting attacks on Israelis.”

According to the Times of Israel, Palestinian sources made the same claim. 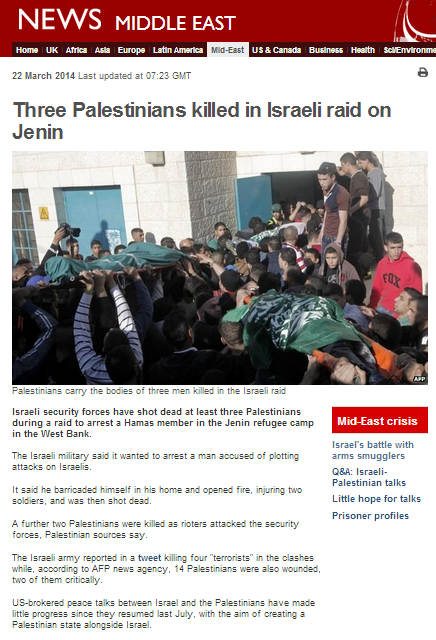 “The IDF said that Abu al-Hija was “wanted for numerous shooting and bombing attacks as well as planning future acts of terrorism.” […]

A Gaza-based media outlet associated with Hamas tweeted shortly after Abu al-Hija’s death that sources said the dead man was “preparing a major operation” against Israel before he was killed.”

“Israeli military sources said the attempted arrest followed a months-long pursuit of the fugitive Al-Hija. The IDF surrounded his house Saturday morning after receiving precise intelligence on his location.

Al-Hija had been linked to at least two attacks on IDF forces in the past.”

The BBC report goes on to state:

The Israeli army reported in a tweet killing four “terrorists” in the clashes while, according to AFP news agency, 14 Palestinians were also wounded, two of them critically.”

Whilst the BBC places the word terrorists in scare quotes, it does not reveal to readers that at least two of the other men killed were members of other terrorist organisations.

That information was confirmed by Palestinian sources, as well as by the terrorist organisations themselves.

“Palestinian officials confirmed three militants had been killed, Alhija from Hamas and one each from Islamic Jihad and Al Aqsa Martyrs Brigade, which is linked to Abbas’ Fatah movement.”

The description of the additional casualties as “rioters” who “attacked the security forces” does not make it sufficiently clear to audiences that the hundreds of attackers were armed with improvised explosive devices and firebombs. It also fails to clarify that at least some of the “14 Palestinians” also wounded in the incident were armed gunmen.

“According to Palestinian sources, several armed gunmen were also in the house, seven of which were injured in the operation and were evacuated to a nearby hospital.”

The overall effect of this BBC report is to mislead audiences by failing to clarify the fact that all three of the men killed in the incident were members of terrorist organisations, by downplaying the actions of terrorists and armed rioters and by placing the focus of attention on the actions of IDF soldiers. That imbalanced and partial presentation is clearly not conducive to accurate audience understanding of the incident.

Hamas in Jenin: pictures the BBC will not show