Whilst visitors to the BBC Arabic website on March 23rd were informed that a Hamas rally attended by tens of thousands had taken place in Gaza City earlier in the day, those visiting the main English language BBC News website found no report on that topic and hence would have no idea of the rhetoric against Israel, Egypt and the Palestinian Authority which was part and parcel of the event.

With the BBC lately having taken to sedately describing Hamas as the body “which governs the Gaza Strip” and with audiences having been told on several recent occasions that Hamas has “refrained” from attacking Israel since the ceasefire of October 2012, it would of course have been useful to audiences to have an up to the minute appraisal of the terrorist organisation’s stance regarding its neighbours. 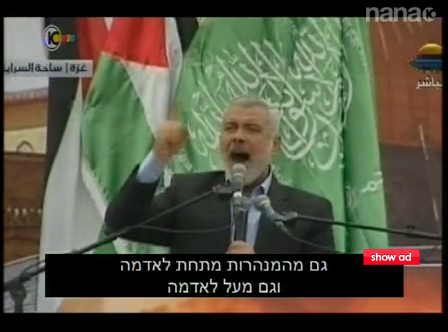 Via Channel 10, readers can view footage (in Arabic and Hebrew) of some parts of Ismail Haniyeh’s speech at the event – translated below.

“Today Gaza says to our brothers in the [West] Bank we are with you, we will not abandon you.

Both from the tunnels beneath the ground and also above the ground, you – the conquerors [occupiers] – will [be driven] out. You have no existence on the soil of Palestine.

We have the ability to create terror from nothing and to shake the earth of Tel Aviv. […]

Below is more footage from the same event.

Haniyeh also called on the PA’s Mahmoud Abbas to “quit this pointless track and not to extend negotiation” and reproached Egypt for its recent stance towards the Gaza Strip’s ruling regime.

Given that in the past we have seen extensive BBC reporting of similar rallies organized by Hamas, it is unclear why BBC News should have chosen not to report on this particular one to English-speaking audiences and instead to confine its limited coverage to the Arabic-language site.

Like Loading...
Tags from the story
BBC, BBC News, BBC Online, Gaza Strip, Hamas, Omission, Terrorism
Written By
Hadar Sela
More from Hadar Sela
Back in March, when the UN HRC produced a report in which...
Read More