On April 3rd the UN refugee agency (UNHCR) announced that the number of Syrian refugees in Lebanon had passed the one million mark. That news apparently prompted the appearance on the same day of two items on the BBC News website’s Middle East page on the topic of Syrian refugees in Lebanon by Julia Macfarlane – one filmed and one written – both of which focus on Syrians now living in Sabra and Shatila. 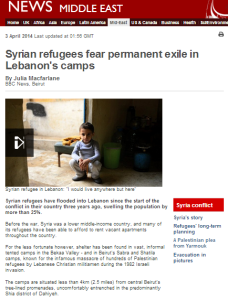 Perhaps a function of the choice of location, Macfarlane’s otherwise informative written report ends with a statement likely to mislead BBC audiences.

“As the conflict rages on though, many Syrians living with Palestinian refugees – whose community has now been in Lebanon for more than 60 years – fear they could share the same fate in years to come.”

Of course the reason there are still Palestinian refugees in Sabra, Shatila and the other ten refugee camps in Lebanon is that the Lebanese government adheres to Arab League policy dating from 1959 according to which:

“Arab states will reject the giving of citizenship to applicants of Palestinian origin in order to prevent their integration into the host countries.”

Hence, for well over six decades those refugees have been deliberately kept in that artificial status for purely political reasons, suffering severe discrimination throughout the entire time.

The fears of Syrian refugees with regard to being forced to remain in Lebanon for an extended period of time in refugee status are undoubtedly well-founded. According to the UNHCR:

“Lebanon has not signed the 1951 Refugee Convention, although it has signed most other human rights treaties relevant to the protection of refugees. Constitutionally, the latter take precedence over domestic law but this is rarely observed by the courts, and there is no domestic legislation or administrative practice to address the specific needs of refugees and asylum-seekers.”

However, the political motivations and strategies of the Arab League which have kept Palestinian refugees in that status for so many years do not apply to Syria and refugees under the care of the UNHCR are not entitled to the same hereditary refugee status as those under the authority of the designated agency for Palestinian refugees – UNRWA – and so the two cases are not, as Macfarlane suggests, in any way comparable.

0 replies on “BBC misleads in article on refugees in Lebanon”