April 11th saw the appearance of an article titled “Israel to impose sanctions against Palestinian Authority” on the Middle East page of the BBC News website. 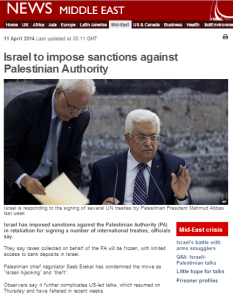 Like the previous report on the subject of the impasse in the talks between Israel and the PLO published two days earlier, this one too signals the beginning of a departure from the promotion of the faux equivocal stance enabled by carefully selected omissions which has so far been adopted to describe to audiences the reasons for the breakdown in negotiations.

As we noted in relation to the previous article:

“The report goes on to quote and promote unnamed “correspondents”, providing no information which would enable audiences to assess the relevance or validity of the claim made by those anonymous sources.

This latest article has equally anonymous “observers” instead of “correspondents” but the message to BBC audiences is the same: Israel is to blame for the talks’ lack of success.

“Israel has imposed sanctions against the Palestinian Authority (PA) in retaliation for signing a number of international treaties, officials say. […]

Observers say it further complicates US-led talks, which resumed on Thursday and have faltered in recent weeks.”

Likewise, this latest report again promotes the inaccurate notion of reissued building tenders in the Jerusalem neighbourhood of Gilo as being “new” and fails to inform readers that the very same tenders were already issued six months ago, that not even the Palestinians believe that Gilo will become part of a future Palestinian state or that the agreement which preceded the commencement of the latest round of talks in no way limited Israeli building. The report even uses the same picture (see below) as it predecessor and audiences are clearly meant to conclude (mistakenly) that these building tenders were one of the reasons for the breakdown in talks.

“Talks had previously stalled after Palestinians were angered by Israel’s decision to approve 700 new settlement units in East Jerusalem – which Israel captured from Jordan in 1967 and formally annexed the area in 1980.

Settlements built there and elsewhere in the occupied West Bank are considered illegal under international law, though Israel disputes this.”

Notably, the report makes no attempt whatsoever to inform audiences of the nature of the “debt payments” it describes.

“In the latest development, Israeli officials are quoted as saying that debt payments would be deducted from tax transfers routinely received by the PA.

Israel collects taxes on behalf of the Palestinians, and transfers about $100m (80m euros) per month, accounting for two-thirds of the authority’s budget.

It is not yet clear how much money will be withheld or for how long.”

Hence – and not for the first time – readers remain unaware of the fact that “[t]he Palestinians owe Israeli companies hundreds of millions of dollars for electricity, power and other services” or that the PA’s Minister of Labour recently admitted that:

“… the PA owes the Israel electric company alone some $400 million.”

Despite the fact that another aspect of the withholding of tax transfers has been noted by the Israeli media, the BBC – in keeping with its long tradition – avoids any mention of the subject of PA payments to convicted terrorists. As the Times of Israel, for example, reports:

“On Wednesday, a senior official warned about the imminent drastic tax cuts, but said the suspended funds were “the money they spend on terrorists and their families.”

“This step would be less dramatic than cutting entirely our monthly tax payments to the PA, but it would be step that would be in place,” he said.

Israel considers the Palestinian payments to Palestinian security prisoners and their families as “funding terrorism,” the senior official said.”

Although that same subject was also raised by the chairman of the European Parliament’s Committee on Budgetary Control in a recent article in the Wall Street Journal, the BBC – as we have previously noted here – scrupulously avoids informing audiences even of the existence of such PA policy.

The BBC’s latest report does, however, include uncritical promotion of statements made by Saeb Erekat – with no qualification or balancing quotes from named Israeli officials.

Mr Erekat told AFP news agency it was “theft of the Palestinian people’s money” and a “violation of international law and norms by Israel”.”

Is the BBC really at ease with promoting the notion to its audiences that “international law” dictates that Israeli citizens must subsidise the electricity bills of their Palestinian neighbours to the tune of hundreds of millions of dollars?

Much of the latter half of this report is no more than a bland reproduction of the BBC’s previous April 9th article and once again it promotes misleading impressions of the terms of the agreement which preceded the current round of negotiations and omits from audience view vital background information crucial to their understanding of the current status of those talks.

Despite being an organization committed under the terms of its constitutional document to building “a global understanding of international issues”, the BBC is making a remarkable job of doing the exact opposite of that with regard to this topic.