Readers may remember that back in October 2013 the BBC’s Editorial Complaints Unit reiterated “the importance of clearly summarising the standpoint of any interviewee where it is relevant and not immediately clear from their position or the title of their organisation” in accordance with section 4.4.14 of the BBC editorial guidelines.

Readers may also have already heard about the recent uproar on the Palestinian street after a professor took students on a visit to Auschwitz.

“Professor Mohammed S. Dajani took 27 Palestinian college students to visit the Auschwitz concentration camp in Poland a few weeks ago as part of a project designed to teach empathy and tolerance. Upon his return, his university disowned the trip, his fellow Palestinians branded him a traitor and friends advised a quick vacation abroad.”

On April 17th the BBC World Service programme ‘World Have Your Say’ weighed in on the subject with an edition titled “Should Palestinian students go to Auschwitz?“. For reasons unknown, despite that programme’s webpage stating that “this episode will be available soon”, it is not. 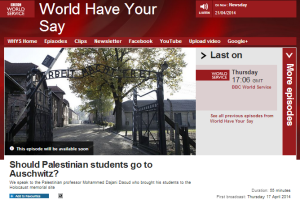 What is available on that webpage, however, is a short clip from the programme which opens with an unidentified speaker claiming that:

“The reason we complained about Mr. Dajani’s initiative has nothing to do with the issue of the Holocaust or recognition of the Holocaust. We have two main reasons why we objected to his initiative. One is its ties with Tel Aviv University where he sends students, with from Tel Aviv University, and this is in violation of the boycott of Israeli universities that we Palestinian academics and all Palestinian universities have agreed to. And the second reason is that he adopted the Zionist perspective that Judaism and Zionism are the same thing and in our opinion this is an antisemitic attitude to equate Zionism and Judaism and somehow link making peace and Zionism with the issues of Jewish suffering around the world.”

So who is this unidentified Palestinian speaker who promotes academic boycott and bizarrely affords himself the right to define antisemitism?

From a podcast of a section the same programme – available for a limited period of time here – we learn that the speaker is Mazin Qumsiyeh, with the BBC presenter introducing him thus:

“And Dr. Mazin Qumsiyeh is with us – professor at Bethlehem and Bir Zeit University and author of books on non-violent resistance as well.”

Those familiar with Qumsiyeh’s range of activities will appreciate that the introduction obviously does nothing to contribute to the BBC commitment to “clearly summarising the standpoint of any interviewee where it is relevant and not immediately clear from their position or the title of their organization”.

Audiences are not informed of Qumsiyeh’s involvement in provocative publicity stunts designed to delegitimize Israel such as the ‘air flotillas’, the so-called ‘Freedom Rides’ and the ‘Global March to Jerusalem’ and they are not made aware of his full range of affiliations with organisations and projects dedicated to bringing about the demise of Israel as the Jewish state.

“Mazin Qumsiyeh is a well-known Palestinian political activist. He heads the ISM-linked ‘Palestinian Centre for Rapprochement between People’ (which was involved in the organization of the 2011 ‘flytilla’), is a co-ordinator for the ‘Popular Committee Against the Wall and Settlements’ in Beit Sahour and was a co-founder of Al Awda (the Palestinian Right to Return Coalition) in the US. Qumseiyeh spoke at the 2010 Stuttgart conference which produced the Stuttgart Declaration – a call for opposition to a negotiated two-state solution to the Arab-Israeli conflict.”

Defamatory claims of ‘apartheid’ and ‘Zionist collaboration with the Nazis’, along with other falsehoods, appear in Qumsiyeh’s comments posted on the WHYS Facebook page and to date have been allowed to stand by whoever moderates that page on behalf of the BBC World Service.

Had BBC World Service audiences been fully informed of Mazin Qumsiyeh’s political opinions and range of anti-Israel activities, they may have been able to judge the relevance of such comments and the context-free promotion of academic boycott for themselves. As it is, with Qumsiyeh having merely been introduced under the authoritative titles of “professor” and “author” – in contravention of BBC editorial guidelines – they are deliberately misled.

0 replies on “BBC WS fails to clarify the credentials of an anti-Israel activist, promotes academic boycott”