On April 27th – the eve of Holocaust Memorial Day in Israel – an article appeared on the Middle East page of the BBC News website under the title “Palestinians’ Mahmoud Abbas calls Holocaust ‘heinous crime’“. 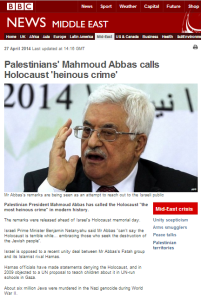 Let’s take a look at how the BBC report represents the statement made by Abbas.

“Palestinian President Mahmoud Abbas has called the Holocaust “the most heinous crime” in modern history. […]

In his statement, Mr Abbas “expressed his sympathy with the families of the victims and many other innocent people who were killed by the Nazis”.

“The Holocaust is a reflection of the concept of ethnic discrimination and racism which the Palestinians strongly reject and act against,” he went on.

He also urged the Israeli government to use “the incredibly sad commemoration of Holocaust day” to take the chance to find a “just and comprehensive” peace with his people, based on a two-state solution.” 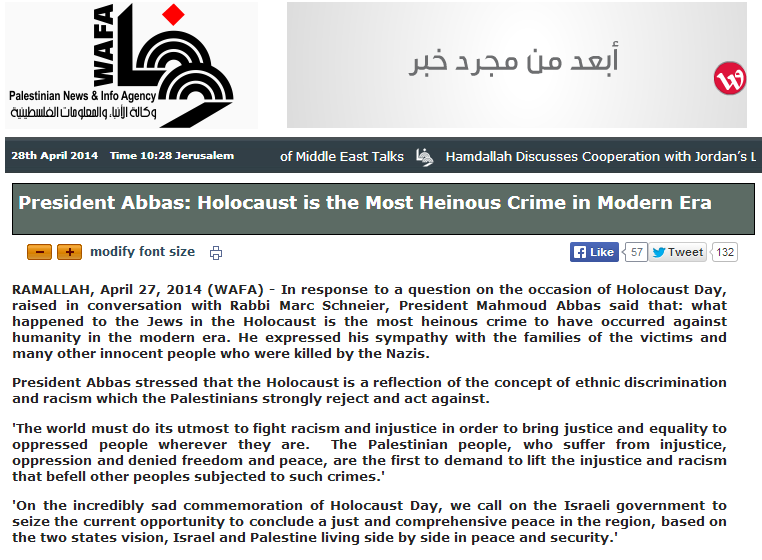 As we see from the Wafa report and as is supported by other sources, Abbas’ statement apparently came as the result of a question from an American Rabbi active in interfaith work; a fact which is not noted in the BBC report.

As we also see, the very significant part of Abbas’ statement which, through use of the words “the world must do its utmost to fight racism and injustice”, promotes the notion of linkage between the Holocaust as “a reflection of the concept of ethnic discrimination and racism” and “the Palestinian people, who suffer from injustice, oppression” is also not reported by the BBC.

Although it once again downplays Hamas’ terror designation by numerous countries, the BBC article notes correctly that:

“Hamas officials have made statements denying the Holocaust, and in 2009 objected to a UN proposal to teach children about it in UN-run schools in Gaza.”

It goes on to state:

“Mr Abbas’s comments were the strongest that he has made publicly on the Holocaust and appear to be an attempt to reach out to a mistrustful Israeli public, the BBC’s Yolande Knell reports from Jerusalem.”

In fact, Abbas has made numerous public remarks in the past regarding the Holocaust, which Knell’s adjective “strongest” might also be used to describe – though in a decidedly different sense. The Israeli public is of course aware of the fact that Mahmoud Abbas’ PhD dissertation was based on a form of Holocaust denial.

“His 1982 dissertation, published as “The Other Side: the Secret Relationship Between Nazism and Zionism,” famously argues that the Zionists collaborated with the Nazis in order to spur more Jewish immigration to Palestine. “The Zionist movement,” it explains, “led a broad campaign of incitement against the Jews living under Nazi rule, in order to arouse the government’s hatred of them, to fuel vengeance against them, and to expand the mass extermination.” The Zionists, the work asserts, were the Third Reich’s “basic partner in crime.” It also claims that the figure of six million dead has been exaggerated for political gain, and suggests one million as a more reasonable estimate. Abbas has never unreservedly repudiated the document, and has in fact regularly reaffirmed its core argument, saying in 2013 that he had “70 more books that I still haven’t published” proving the Zionist-Nazi partnership.”

Had BBC audiences also been made aware of that fact, they might have been better equipped to understand Yolande Knell’s description of the Israeli public as “mistrustful” and to understand why this prompted statement from Abbas – and the inappropriate political messaging it includes – is not the news item it is framed to be in this report.