The April 28th edition of ‘Hardtalk’ – broadcast on the BBC News Channel – was devoted to an interview by Sarah Montague with Ahmed Kathrada. Readers in the UK can view the programme on iPlayer. 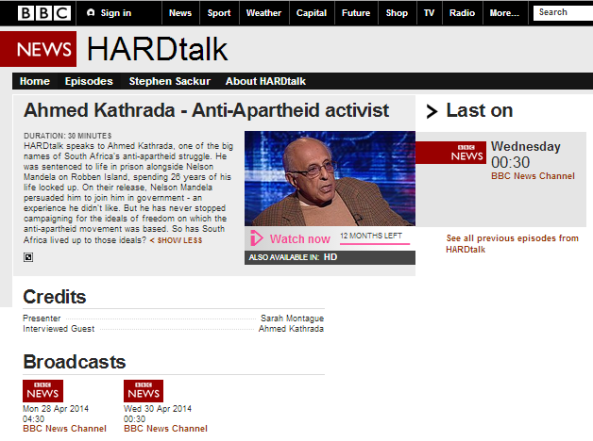 A section of that interview was also promoted on the Middle East page of the BBC News website under the title “Kathrada: I can never be anti-Jewish“. The synopsis to that clip reads as follows:

“Ahmed Kathrada was one of the big names of South Africa’s anti-apartheid struggle. He was sentenced to life in prison and spent time alongside Nelson Mandela on Robben Island.

After 26 years in prison he was released and was then persuaded by Nelson Mandela to join him in government – an experience he did not enjoy. But he has never stopped campaigning for the ideals of freedom on which the anti-apartheid movement was based.

Today he says he gives his whole-hearted support to the Palestinians but makes clear he is critical of Israel, not anti-Jewish.” 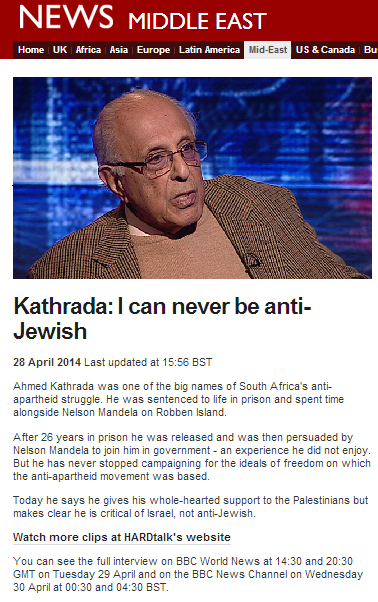 In other words, the messaging the BBC is trying to promote in both the title of this clip and its synopsis is that Kathrada’s ‘criticism’ of Israel is not antisemitic.

However, in the clip itself Kathrada expresses unequivocal support for the practice of indiscriminate killing of Israeli Jews by Palestinian terror organisations.

Kathrada: “My own view is I keep on supporting the Palestinian struggle once they have decided on the…Palestinian leaders have decided….this is the road we’ll take, I support them.”

Montague: “Even if that route involves violence?”

AK: “But I’m not going to prescribe to them what they should…”

SM: “Is their use…is their use of violence justified?”

AK: “If, under the circ…that’s not for me to say. But if they, in their wisdom, resort to violence as the only method, I’ll support them. I’ve been to Palestine. I have seen what is like. Is the only colony in the world today; a colony of Israel. We have seen – I have seen in Palestine what didn’t exist under apartheid in the worst days of apartheid.”

SM: “So your support is unconditional?”

AK: “My support is whole-hearted. I take my cue from what they do. I don’t prescribe to them. So far there is no reason for me to criticize the Palestinian leadership.”

SM: “But the South African Zionist Federation says Barghouti [Marwan Barghouti – Ed.] is not a political prisoner but a terrorist guilty of multiple crimes against humanity.”

AK: “I’m not surprised at them. And they have tried to turn…let me take it as an individual because I have been outspoken on Palestine. They’ve been trying to misinterpret us as being anti-Jewish; antisemitic. We’re not.  We are critical of Israel. That does not make us anti-Jewish.”

Sarah Montague’s total failure to challenge Kathrada’s use of the ‘apartheid’ trope (at least in the clip promoted on the BBC News website) is of course highly significant. Not only does she permit the amplification of that falsehood, but given that Kathrada is described by the BBC in the various programme synopses as “one of the big names of South Africa’s anti-apartheid struggle”, she lends that defamation a false air of authority.

No less significant is Montague’s failure to challenge Kathrada’s ridiculous claim that support for the indiscriminate terrorist targeting and murder of Jews in Israel as a method of bringing about the demise of the world’s one Jewish state is not antisemitic, but merely ‘criticism’ of Israel.

Amplification of both the ‘apartheid’ trope and the BDS campaign is becoming an increasingly prevalent phenomenon in BBC content. However – in obvious breach of editorial guidelines on impartiality – audiences have yet to see, hear or read any significant BBC output which clarifies the background and political motivations behind the employment of that defamatory trope.