On April 7th 2014 the BBC Media Centre published a “Joint statement issued at the BBC’s Safety of Journalists Symposium” which, inter alia, included the following: 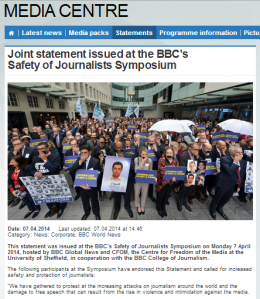 “In too many countries journalists are facing serious intimidation and violence, which in turns leads to disturbing patterns of censorship and self-censorship. We stand against these abuses and today we call on the governments concerned to investigate each one of those crimes promptly and effectively so as to bring those responsible to justice.”

As regular readers of the BBC News website’s Middle East page will know, the subject of abuses against journalists is sadly not an infrequent topic there, with current articles on that page addressing the topic of two Times journalists attacked in Syria and the ongoing trial of the Al Jazeera journalists in Egypt, which has received a lot of BBC coverage. The same issue is also often addressed in other sections of the BBC News website, with some of the more recent reports having come from Hong Kong, Ukraine and Crimea.

But what happens when the instigators of violence against journalists are members of the same profession? On May 16th two journalists working for the Israeli outlet Walla News were attacked in Beitunia. Avi Issacharoff writes:

“I found myself seconds away from being beaten to death by a mob of Palestinian masked men during clashes in the West Bank town of Beitunia, north of Jerusalem, on Friday

I’m not prone to exaggeration. It was a case of life and death, and I was within moments of falling victim to the kind of lynch that saw two Israeli soldiers who strayed into Ramallah in 2000 beaten to death by a baying mob. […]

I was there to report on the Nakba Day protests with a cameraman colleague from Walla News. He was some distance from me when he was approached by several Palestinian journalists who told him to “Get out.”

I walked toward them, and told them that if they had a problem, they should be talking to me. One of the Palestinian journalists, a young woman, then called over to a group of masked men, who swiftly surrounded me and began attacking me.”

It is worth revisiting an article written by Khaled Abu Toameh just over a year ago on a subject which, despite its clear stance on abuses of journalists elsewhere, the BBC did not see fit to cover at the time.

On a number of occasions, the threats included acts of violence against the Israeli journalists, particularly in Ramallah.

Human rights organizations and groups claiming to defend freedom of media have failed to condemn the campaign of intimidation waged by Palestinian journalists against their Israeli fellow-journalists.

It is one thing when governments and dictators go after journalists, but a completely different thing when journalists start targeting their counterparts.

An Israeli journalist had his microphone damaged during an assault, while another was thrown out of a press conference. Behind the two incidents were Palestinian journalists, angered by the presence of Israelis in Ramallah and other Palestinian cities.

The threats and harassment came as more than 200 Palestinian journalists signed a petition, for the first time ever, calling on the Palestinian Authority to ban Israeli correspondents from operating in its territories “without permission.” “

And there have been additional similar incidents since.

To date, the attack on Avi Issacharoff and his colleague (which is further detailed in this article) has not been reported by the BBC.