A May 16th Guardian article by Karma Nabulsi – an Oxford University academic and former PLO representative who previously claimed, at the Guardian, that Palestinian “schoolchildren are blown to bits [by the IDF] while playing’ – which fetishizes Palestinian violence represents a pattern at the media group, whereby contributors and editors support for the ‘right’ of Palestinians to engage in terror attacks against Israelis.
Here are just a few examples: Guardian editors published a letter in January 2011 by a philosophy professor which explicitly defended the right of Palestinians (on moral grounds) to murder Israeli civilians in terror attacks – an editorial decision which was actually defended by their readers’ editor following the uproar which ensued;  In May 2011, the Guardian published an official editorial about the ‘Arab Spring’, and praised the Palestinians for teaching the Arab world how to launch ‘successful’ intifadas; And, in November 2012, during the war in Gaza, Associate Editor Seumas Milne wrote an op-ed explicitly defending the right of Hamas to launch terror attacks against Israelis, and argued that Israel has no such moral right to defend itself.
So, while the May 16th article, titled ‘Artist of the Palestinian revolution‘, on an exhibit featuring Palestinian revolutionary films and art now showing at venues in London (under the slogan “The World is with Us“), comes as little surprise, it’s nonetheless interesting in the way it’s presented, as embodying chic, progressive artistic sensibilities. 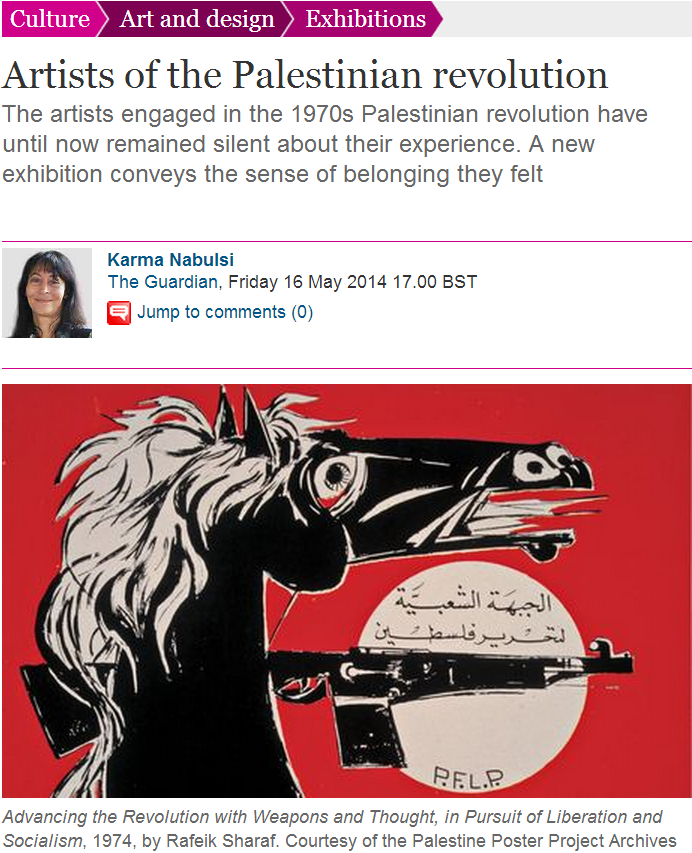 Nabulsi’s tale about the glorious nature of the Palestinian revolution begins in the early passages:

In the simplest terms, the story of the Palestinian revolution is a story of the cadres who created it, served it, and gave it both life and force. A people expelled en masse from their homeland, they managed to take matters into their own hands and transform their situation in a most ingenious manner. Initiated by a handful of young refugees, they began to “make their own history”, launching a popular struggle in the late 1960s to regain their homeland and their rights.

However, the PLO was founded in 1964, three years before Israel was ‘occupying’ any Palestinian – or, more accurately, Jordanian – territory, and the (clearly stated) goal of the “popular struggle” was not to “regain their homeland”, but to annihilate the Jewish state.
Nabulsi not only fails to note that the weapons depicted in her beloved Palestinian art were used to murder unarmed Jewish civilians, but characterizes the PLO and other Palestinians terror groups as culturally vibrant, progressive, and humanistic social welfare-based institutions:

Developing factories, institutions, hospitals, schooling and a plethora of ideologies inside an armed struggle throughout the 1970s, Palestinians also created an ebullient revolutionary culture of music, film, poetry, radio, photography, painting and plastic arts, and became the touchstone for revolutionary movements across the world.

Here’s the next terrorist-chic graphic from the exhibit used by Nabulsi:

Nabulsi then sums up the movement thusly:

By no means a Marxist revolution (although Marxists were a part of it), it was definitely progressive, and certainly popular. To the revolutionary movements of Africa, Latin America and Asia it was known intimately: Palestine was with the world, just as the world was with Palestine.
This was not merely an anti-colonial or national liberation movement. Comprising the disenfranchised and the dispossessed, and driven by a determination to return home, and to count on themselves alone, meant that the Palestinian cause was not national, nor leftist, but, instead, of the whole people. The culture of return and the armed struggle at the heart of the revolution brought common cause to a people whose country had been destroyed by the Nakba

Since 1964 (the year the PLO was founded), over two thousand Israelis have been murdered, and thousands more maimed, by the “culture of Palestinian armed struggle”.
Finally, we’ll leave you with the trailer from the ‘The World Is With Us” London exhibit promoted by Nabulsi: