“Spar: To bandy words about in argument; dispute.” (source)

The ‘Features & Analysis’ section of the BBC News website’s Middle East page included an article titled “Who, What, Why: What language would Jesus have spoken?” on May 27th. The article opens: [emphasis added] 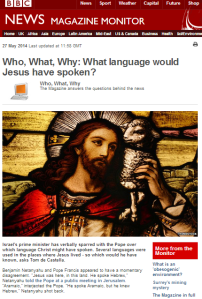 “Israel’s prime minister has verbally sparred with the Pope over which language Christ might have spoken. Several languages were used in the places where Jesus lived – so which would he have known, asks Tom de Castella.

Benjamin Netanyahu and Pope Francis appeared to have a momentary disagreement. “Jesus was here, in this land. He spoke Hebrew,” Netanyahu told the Pope at a public meeting in Jerusalem. “Aramaic,” interjected the Pope. “He spoke Aramaic, but he knew Hebrew,” Netanyahu shot back.”

But did Netanyahu and the Pope really ‘spar’ or have a “disagreement” over the issue of Jesus’ language skills? As Yair Rosenberg points out, the media – BBC included – has inflated and distorted what was in fact a few seconds of amicable conversation.

“Yesterday, the press reported a sparring match between Pope Francis and Benjamin Netanyahu that never really transpired. To judge by media reports, the Israeli Prime Minister had a testy exchange with the Supreme Pontiff over whether or not Jesus spoke Hebrew. Reuters broke the story with the headline “Pope, Netanyahu spar over Jesus’ native language.” Using the language of verbal combat, the piece reported the Israeli leader as saying, “Jesus was here, in this land. He spoke Hebrew.” The Pope was said to have “interjected” with a correction: “Aramaic.” To this, Bibi “shot back” that Jesus “spoke Aramaic, but he knew Hebrew.” The Chicago Tribune soon dubbed the incident a “spat,” and by the time it made its way to The Age in Australia, Netanyahu was said to have “publicly bickered” with the Pope, evincing the “sour undertone” of the Catholic leader’s entire visit to Israel. […]

But unfortunately for headline writers hoping to gin up controversy for clicks, there is video of this supposed smackdown, and it shows nothing of the sort.”

The BBC article includes a link to the Reuters report upon which it appears to be based. There too, the words ‘spar’ and ‘shot back’ appear. 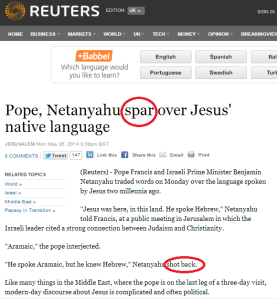 The fact that the BBC joined the ranks of the many media organisations which got this story wrong is entirely attributable to an obvious failure to check the facts before recycling this Reuters piece.