On the afternoon of June 22nd the BBC News website published a report on its Middle East page under the rather clumsy title “Israeli teen ‘killed by Syria firing’ in Golan Heights“. 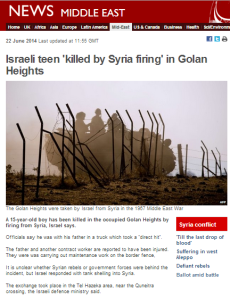 “A 15-year-old boy has been killed in the occupied Golan Heights by firing from Syria, Israel says.

Officials say he was with his father in a truck which took a “direct hit”.

The father and another contract worker are reported to have been injured. They were was [sic] carrying out maintenance work on the border fence,

It is unclear whether Syrian rebels or government forces were behind the incident, but Israel responded with tank shelling into Syria.

The exchange took place in the Tel Hazeka area, near the Quneitra crossing, the Israeli defence ministry said.”

Although details of the event were released for publication around half an hour after this BBC report was published, it has so far not been updated to include the victim’s name or correct age. In fact, Mohammed Karakra was thirteen years old; not 15 as initially reported and he had accompanied his father to work on the first day of his summer holidays from school. Mohammed’s father – from the village of ‘Arrabe in the Galilee – is part of a team of contractors working on the border fence in the Golan Heights on behalf of the Ministry of Defence.  He was seriously injured and is currently hospitalized in Haifa. Two other workers were also injured in the cross-border terror attack which took place at around 11 a.m. near Tel Hezeka, in the vicinity of the community of Alonei HaBashan.

“It is the first time an Israeli has been killed by firing from Syria in the Golan Heights since the Syrian conflict began in 2011.

Israeli military spokesman, Lt Col Peter Lerner, told AP news agency the firing from Syria was “clearly intentional” but it was unclear whether it was the result of mortar fire, a roadside bomb or shelling.”

The Israeli media reports that it is now believed that an anti-tank missile was fired at Mohammed’s father’s vehicle. Whilst the vicinity on the other side of the border where the incident took place is currently controlled by anti-regime forces, it is not yet known which of numerous organisations operating in the area – which include Hizballah – is responsible for the attack.

The BBC article then goes on to present readers with its standard insert to any report relating to the Golan Heights.

“The Golan Heights, a rocky plateau in south-western Syria, was seized by Israel from Syria in the closing stages of the 1967 Middle East War.

The two countries remain technically in a state of war, and UN observers are deployed to monitor a 70km-long (44-mile) demilitarised zone.”

Of course the BBC has done little to keep audiences informed of changes to UNDOF’s operations in recent months or of the full scale of cross-border incidents in the area.