As readers are no doubt aware, on the evening of June 26th the Israel Security Agency (ISA) published the names of two Hamas operatives from Hebron suspected of carrying out the kidnapping of Eyal Yifrach, Naftali Frenkel and Gil-ad Sha’ar on June 12th.

On the same evening an article titled “Israel identifies two suspects in hunt for teenagers” was published on the BBC News website’s Middle East page. The report opens as follows, once again presenting the kidnappings in ambiguous terms: 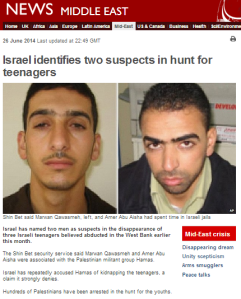 “Israel has named two men as suspects in the disappearance of three Israeli teenagers believed abducted in the West Bank earlier this month.

In fact, officials from that internationally designated terrorist organization (rather than mere “militant group” as the BBC euphemistically describes it) have confirmed that Qawasmeh and Abu Aisha are members of Hamas rather than merely “associated” with it.

“Hamas officials in Hebron confirmed the two suspects were members, and said Israeli troops have targeted the men’s homes since the beginning of the operation. The officials, speaking on condition of anonymity because of fears for their safety, said troops had entered the homes several times, conducting intense searches and confiscating items as evidence.”

Moreover, four years ago Qawasmeh [also spelt Kawasme – Ed.] himself admitted that he belongs to Hamas.

“In 2010, when security forces last investigated Kawasme, he confessed that Hamas’ military wing had recruited him to operate for the organization in Hebron. In 2009, Kawasme participated in Hamas-led military training, attempted to obtain materials for explosives, and helped the terrorist organization recruit new operatives.  In response to these actions, Israel detained Kawasme until March 2012.”

The article goes on to once again mislead audiences by stating that the site of the kidnapping is near Hebron when in fact it is 27 kms (16.7 miles) away from that city.

“Shin Bet said both men had served time in Israeli prisons for “terrorist activity” and were from the Hebron area, where the boys disappeared from earlier this month.

Amer Abu Aisha’s father told the Agence France-Presse news agency that his son was not involved in the disappearance of the youths.

But he added that he had not seen his son since the day after the teenagers went missing.” [emphasis added]

In fact, the father has told journalists that his son has not been seen since the evening on which the kidnapping took place – rather than the day after, as this BBC report misleadingly suggests.

“Abu Aysha, a 32-year-old locksmith, was last seen at a family gathering only hours before the kidnapping, according to his father Omar, who spoke to The Times of Israel in Hebron several days ago. Abu Aysha’s father, Omar, who has spent time in Israeli prisons for ties with Hamas, said that his son left the family gathering abruptly without offering any details as to his destination.”

In addition, the BBC report states:

“Israel has repeatedly accused Hamas of kidnapping the teenagers, a claim it strongly denies.”

“The leader of Hamas, Khaled Meshaal, reiterated on Thursday that “we do not have information about what happened”.”

Whilst it is not clear to which statement made “on Thursday” the BBC refers, just two days earlier – in a June 23rd interview – Hamas leader Khaled Masha’al was considerably less explicit about Hamas’ involvement in the kidnappings than the BBC would have audiences believe.

“In a lengthy interview with Al-Jazeera on Monday evening, Mashaal insisted that Gil-ad Shaer, Naftali Fraenkel and Eyal Yifrach, abducted while hitchhiking in the Etzion Bloc south of Jerusalem, were “settlers and soldiers in the Israeli army.”

“No one claimed responsibility so far. I can neither confirm [Hamas’s responsibility] nor deny it,” Mashaal said, quickly adding that the circumstances of the kidnapping were more important than the perpetrators.

Additionally, Hamas spokesman Salah Bardawil stated on June 19th that “the Palestinian resistance” had carried out the kidnappings. The BBC has not made any attempt to inform audiences so far of the context of the dozens of attempted kidnappings of Israeli soldiers and civilians in the months prior to this incident, nor of the statements made by several Hamas leaders in the days leading up to June 12th.

“In Gaza, Hamas has practiced kidnapping in public to cheering crowds. Last year, the organization even distributed an 18-page “Field Manual for Kidnapping” to its Qassam Brigades, providing detailed explanations on how to target Israeli soldiers, when to kidnap (rainy days are best) and how to avoid being caught (don’t use the Internet or phone).

If Hamas has not abducted anyone in the past eight years, it’s not for lack of trying. According to a study published this week by the Meir Amit Intelligence and Terrorism Information Center, Israeli security forces have foiled at least 48 kidnapping attempts since January 2013, 14 of them this year alone.”

As we see, this report downplays the level of the two suspects’ known membership of Hamas, erases from audience view that organisation’s international terror designations and record of kidnapping attempts and encouragement. In addition it promotes cherry-picked statements made by Hamas leaders regarding the organisation’s involvement in the kidnappings.

Concurrently, the article yet again fails to make any mention of the vast quantities of weapons and explosives discovered during the search for the missing teens, of the underground tunnels also uncovered, the concurrent rise in missile fire from the Gaza Strip at civilian targets in Israel or of the public and official praise of the abductions on the Palestinian street, social and mainstream media.

Likewise, since the beginning of its reporting on this topic, the BBC has failed to clarify to audiences the significance of the involvement of a partner in the Palestinian unity agreement – and resulting unity government – in this kidnapping.

All that from a corporation pledged to the enhancement of “audiences’ awareness and understanding of international issues”.