An article by the BBC’s security correspondent Frank Gardner, which appeared in the ‘Features & Analysis’ section of the BBC News website’s Middle East page on June 19th under the title “Jihadist groups around the world“, opens with an assertion which perhaps reveals more about the ‘accepted wisdom’ prevalent in the corridors of the BBC than anything else.

“A large number of al-Qaeda’s leaders and commanders have been captured or killed over the last decade, many by controversial air strikes by unmanned aerial drones. […]

But the world’s counter-terrorism officials have little cause to celebrate.

Rather than eliminating al-Qaeda, they have caused it to atomise and disperse, morphing into several different organisations around the Middle East, Africa and Asia, with large numbers of jihadist sympathisers in Europe.” [emphasis added]

The article also informs readers of factors the author considers to be “sustaining the global jihadist phenomenon”, including “local, national and regional grievances”. Under the sub-heading “Bad governance” the author proposes that:

“This is really one of the prime drivers towards extremism. In Muslim-majority countries where national governments and their security forces are viewed as corrupt, predatory and abusive, it is easy for jihadist recruiters to find volunteers.

When those governments are perceived as having a cosy, supportive relationship with the US and the West, it becomes even easier for al-Qaeda’s followers to recruit.”

He also asserts that:

“Many recruits to global jihadism are prompted by a sense that their religion has been discriminated against, oppressed or insulted.”

Last but not least, readers are encouraged to view the Global Jihad phenomenon in terms of “personal issues”.

“Many of the most fanatical adherents of al-Qaeda’s violent West-hating worldview are young men looking for a role, a purpose, in life.

Some European jihadists are converts or have had troubled adolescences, getting into trouble with the police.

Spells in prison often leave them more radicalised than when they went in. Nearly all have a highly negative view of government authority.”

The connections between the Global Jihad phenomenon and the age-old Sunni-Shia conflict do not get a mention in this article and its underlying incentive – the drive to impose a specific supremacist religious-political ideology – is ignored, as is its imperialist objective of re-establishing a Caliphate.

The article includes a map of locations of “main Jihadist groups”. 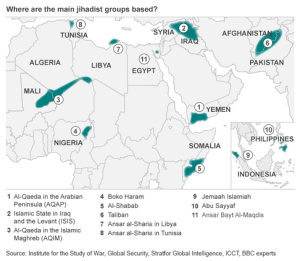 Notably, despite the BBC’s own experiences with one such group when its correspondent there was kidnapped in 2007, the Gaza Strip does not appear on this map as a location of Global Jihad activity, even though a number of groups operate in and from that territory, as has been occasionally reported by the BBC in the past.