Many readers have written in over the last few days in order to bring our attention to items of BBC content on a range of platforms and we would like to thank all those who took the time to help out, especially during such an intense period.
One item which was the subject of several e-mails was a report by the BBC Jerusalem Bureau’s Yolande Knell broadcast on BBC Radio 4’s ‘Today’ programme on July 3rd, along with several other items pertaining to the rioting in Jerusalem and the murder of Muhammed Abu Khdeir. We will address other aspects of that programme in a future post, but Knell’s item is of particular interest because in addition to being broadcast on BBC Radio 4’s flagship news and current affairs programme, it has also been vigorously promoted on the BBC News website’s Middle East page, appearing under the inflammatory and of course inaccurate title “Cousins of Palestinian teenager: Police ‘protecting killers’“, so far for three consecutive days. 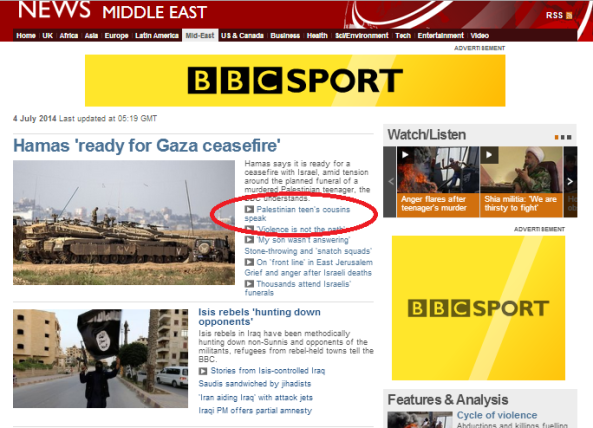 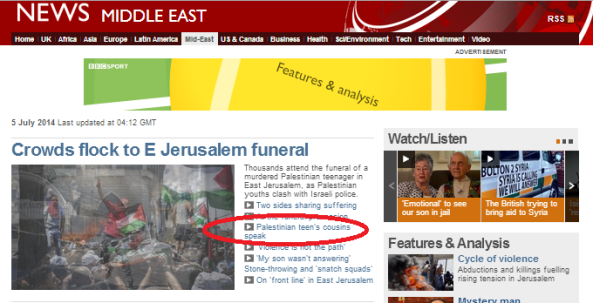 In the ‘Today’ broadcast, the item was introduced by Yolande Knell with the following words:

“Now when I was in the area late yesterday covering the clashes, I met two of Muhammed Abu Khdeir’s cousins – Dima and Sumoud Abu Khdeir and I asked them for their response to what happened.”

Following Knell’s audio report, during which she does not intervene at all (transcript below), presenter John Humphrys made do with the following comment:

In other words, no effort was made either by Knell or Humphrys  – either before, during or after the interview – to provide listeners with any kind of balance or perspective which would enable them to put the three minutes of undiluted defamation and propaganda they were about to hear or had just heard into its appropriate context.
To clarify: what the cousin terms “settlements” are neighbourhoods of Jerusalem.

The accusation that the Israeli security forces are “protecting” the perpetrators of the crime is of course a very serious one indeed. It is also one for which there is absolutely no factual basis and at this stage of the ongoing investigation, the police have not yet named, apprehended or charged anyone in connection with the crime. One must therefore question the BBC’s extensive and unchallenged amplification of such a serious defamation.  The cousin continues: 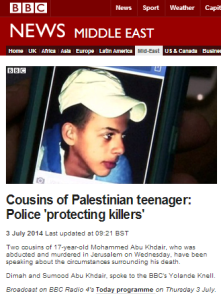 “What does that tell you about the laws?  The laws they don’t care about us. They don’t care about Palestinians. We’re second class citizens. We’re not considered citizens. We’re garbage. They killed us: one down, five million to go, right? Less than five million. Every day there’s a martyr and they go and protect their settlements. So yeah, we’re mad, we’re upset, we’re throwing rocks. That’s all we can do is throw rocks. That’s our reaction; we’re upset.”

Of course all residents of Shuafat and other Arab neighbourhoods in Jerusalem are entitled to apply for Israeli citizenship and the laws of the land apply equally in all regions. The interview continues with the second cousin denying Palestinian involvement in the murders of Eyal Yifrach, Naftali Frenkel and Gil-ad Sha’ar and the promotion of a conspiracy theory.

Cousin B: “Five thousand prisoners. Palestinian prisoners in their jails and three of them we didn’t kill them and we all know that it’s a play from Netanyahu to kill all these kids. Your aim is kids? Kids?”

Cousin A: “Yeah. A kid was almost kidnapped – a child from his mother was almost kidnapped two days ago in front of my uncle’s store. Thank God our community is strong enough to protect this woman and her child. Unfortunately it was 3:30 in the morning when this kid got kidnapped in front of the mosque. No-one saw them. There was a few people that saw them but they got away before they could help ‘cos it was 3:30 in the morning. And they know it’s Ramadan. They know it’s Ramadan. They took him during Ramadan.”

Cousin B: “What would a kid do to you? He’s a kid. Seventeen years old. What he can do to you? To all your weapons, your sick things. Your sick settlements. There are settlers they are just killing us. Living in our land and killing us. That’s sick.”

Cousin A: “Stolen property and stolen children. Stolen. Now they’re stealing our kids and killing them. Our kids; not adults. Not people that are – hey, I’m pro-Palestinian, I wanna – no: children that haven’t even passed the [unintelligible]. Let them get into college. Let them live life a minute before you go kidnap and kill them. No-one cares. Who’s….the media doesn’t….I mean obviously you’re talking to me; you’re part of the media, but there’s something crazy going on. But for the most part no-one talks about the Palestinian situation, the Palestinian case. It’s quieted, it’s shushed because most people support the Israeli government. No-one cares if six people are missing, ten people die, two kids are kidnapped, ten women are killed. No-one cares about Palestinians.”

There is nothing in this uninterrupted three-minute diatribe which could possibly contribute to the enhancement of BBC audiences’ knowledge and understanding of the facts behind the event to which it supposedly relates – quite the opposite, in fact.  And yet, an editorial decision was made not only to broadcast the item on Radio 4, but also to further amplify it on the BBC News website.