In addition to the BBC’s ‘parachuting in’ of Christian Fraser from Paris, further back up for its Jerusalem Bureau’s coverage of recent events in the region came from the corporation’s correspondent in Istanbul, James Reynolds.
On July 4th Reynolds produced two filmed reports for BBC television news about the funeral of Muhammed Abu Khdeir, both of which were also promoted on the BBC News website’s Middle East page.
Both those reports appeared two days before it was announced that six suspects had been arrested by the police on July 6th on suspicion of having carried out the kidnapping and murder.
The first report – titled “Palestinian teenager funeral: ‘We can hear explosions’” – is presented on the website with a synopsis which includes the following statement:

“The family of Mohammad Abu Khdair believe he was abducted and killed in revenge for the murders of three Israeli teenagers whose bodies were found in the West Bank earlier this week.”

Yet again, no effort was made to inform BBC audiences that at that time that synopsis was written, no arrests had been made and so the identity of the killers and their motive was still a matter for speculation.
Reynolds tells viewers:

“This is the funeral procession for 16 year-old Muhammed Abu Khdeir. He…his body has just been taken along this road. The women are towards the end of the procession and if we just have a look around here, the men are in front. They’ve been about 400 meters in front. They’re heading right towards here. But we can hear – I don’t know if you can hear it in the background – some explosions. We can see some people throwing stones just over there, down towards the end. That gives us an indication that there may be clashes at the moment between some protestors and mourners and the Israeli police. We’re just gonna stay here for safety’s sake and keep an eye on what’s going on down the hill. We can see already one Palestinian ambulance is making its way down the street and there’s a real sense of anger among these Palestinians here. They say that they want justice for 16 year-old Muhammed Abu Khdeir. They want those who kidnapped, who abducted him, to be brought to trial.”

At the time that Reynolds made those statements there was no reason to suppose or evidence to suggest that the Israeli authorities were not doing their utmost to solve this crime and bring the perpetrators to trial, but Reynolds nevertheless ‘contextualised’ the riots in Jerusalem’s streets with the insinuation that they were the product of a failing system of justice, and in his second report the background to that insinuation became clearer.
Beyond his speculative narration of “clashes” – in fact violent rioting – which he could not see, and his amateurish report of “explosions” – most likely riot-control measures – Reynolds had nothing to actually tell audiences. Notably, what he could see – the black and white Jihadist flags which were in ample evidence at the funeral procession – were not explained to viewers either in this report or the subsequent one.

Reynolds’ second report on the same topic appeared several hours later. The synopsis to the BBC News website’s version of that report – titled “Crowds flock to Jerusalem funeral for Palestinian teenager” – again promoted what was at that stage evidence-free speculation, but at least this time the ongoing police investigation got a brief mention.

“Mohammad Abu Khdair’s family believe he was killed in revenge for the murders of three young Israelis in June, but police have yet to establish a motive.”

Reynolds opened his report by saying:

“Palestinian mourners clear the way for the coffin of Muhammed Abu Khdeir. At least seventy Palestinian children have been killed in the past five years. But the abduction and killing of this teenager so soon after the killing of three Israeli teenagers stands out.”

Reynolds did not inform viewers of the source of his cited numbers, how that source defines “children” or whether or not they were involved in violent rioting or terrorism when they were killed. He continued:

“Muhammed – here taking a selfie – was a sixteen year-old with a fashionable hair-cut. On Wednesday, before dawn, he was abducted and killed. Israel says its investigation continues. His family says that this is the moment of his kidnapping. They argue that these CCTV pictures show a group of Israelis throwing Muhammed into their car across the road. You can’t make out the teenager in the pictures, so it’s hard to verify the footage.”

One of course also cannot determine from that footage the identity of the abductors either, but that is not pointed out to audiences. 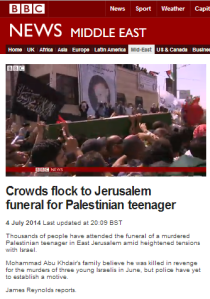 “Muhammed’s father Hussain went over CCTV pictures with me. He follows three Israeli families this week in mourning a teenage son.

Father: “I don’t have anything to do with them. I don’t know how they were killed but we do know who killed my son.”

Of course that statement from the father is inaccurate: at the time it was made, no-one had been arrested for the murder of his son and the case still has to be tried and proved in a court of law before it can be concluded that his son’s killers’ identities are known. However, it is known how the three Israeli teens were killed. Reynolds did not clarify those facts to BBC audiences. He continued:

“Naftali Frenkel – on the left of this poster – was one of the three Israeli teenagers found dead on Monday. Naftali’s family wants justice for them and also for Muhammed, the seventeen year-old Palestinian.”

The report then cuts to footage of Yishai Frenkel – Naftali’s uncle – speaking.

“But Palestinians at Muhammed’s funeral don’t trust Israeli justice. They want Israel to leave Palestinian towns and cities so that they can build a state and a justice system of their own.”

Reynolds’ advancement of the idea that the urge to “build a state and a justice system of their own” is what fuels the conflict between Israel and the Palestinians is of course simplistic to the point of ridiculous. Notably, he failed to inform audiences that the vast majority of Palestinians already have their own justice system in PA controlled areas and that those living in Jerusalem like the Abu Khdeir family are protected by the same justice system as their neighbours of all other ethnicities – as the arrest of six suspects four days after the crime was committed clearly indicates. Remarkably too, Reynold’s phrasing signposts to audiences that neighbourhoods of Jerusalem fall into the category of “Palestinian towns and cities” even though their status is to be determined in negotiations between the parties concerned.
Reynolds concluded:

“This week has shown Israelis – and now Palestinians – that their children, their teenagers, are often the most vulnerable. The young pay the price for the conflict waged by adults. This week has left parents on each side more frightened and more angry. Israelis and Palestinians share suffering, but not necessarily understanding.”

Four heinous murders have indeed been committed within the space of three weeks by extremists on both sides of the divide. In one of those cases suspects have now been arrested and – despite Reynolds’ insinuations – will now go through the judicial process necessary to determine their guilt. In the other three cases, the two main suspects are still on the run after nearly four weeks – obviously supported and helped by others.
Those facts – along with numerous others related to these incidents such as the celebrations of the kidnappings of the three Israeli teenagers on the Palestinian street – do not fit into the BBC’s favoured Middle East narrative, but unless they are reported, the corporation will continue to fail to meet its obligation to “[b]uild a global understanding of international issues”.
The Israeli police also made another statement on the same day that the arrests of those suspected of murdering Muhammed Abu Khdeir was announced. That statement also related to a teenager murdered at the beginning of May, apparently out of ‘nationalistic’ motives. Shelly Dadon’s story was not reported by the BBC at the time and it does not appear on the BBC News website over four hours after details of the murder were released.