Yolande Knell’s filmed report from July 15th was broadcast on BBC television news programmes as well as being posted on the BBC News website’s Middle East page under the title “Palestinians reject Gaza ceasefire proposal“.
That report includes some interesting items, one of which is the image below which clearly shows missiles being fired by terrorists from built-up residential areas in the Gaza Strip. 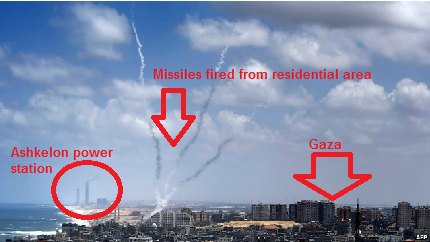 Knell fails to inform viewers that both the storage of missiles and the launching of such attacks from a residential area contravene international conventions.

Article 58: ” The Parties to the conflict shall, to the maximum extent feasible: 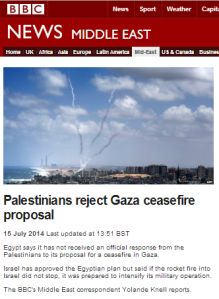 “But overnight, diplomatic efforts to end the two-way violence gathered pace. This was an Arab League meeting in Cairo. Egypt – a key player – set a time for a ceasefire and offered to mediate a longer-term deal. Israel accepted the offer but the main Palestinian factions in Gaza did not.

We’re here at the main hospital in Gaza City. This is one of the few locations where Hamas officials feel they’re safe enough from a possible Israeli attack to come out and speak to the media. Already they’ve told us that they reject Egypt’s proposed ceasefire deal.”

The report then cuts to an interview with Hamas spokesman Sami Abu Zuhri.
The main hospital in Gaza City is of course Shifa hospital, from which both Knell and Jeremy Bowen have reported in recent days. The fact that the Hamas leadership is once again hiding in Shifa hospital because it knows that Israel will not strike a hospital means that both patients and medical personnel are being used as human shields, but Knell fails to point that fact out to viewers.

Whilst the BBC has been very trigger-happy with its amplification of unproven Palestinian accusations of Israeli wrongdoing (see some examples here, here and here), it has been remarkably and uniformly consistent in its failure to provide any explanation to audiences regarding the Hamas policy of using the civilian population of Gaza as human shields – even when it observes and films that policy in action itself.