Of all the hundreds of items of coverage of the events of the last month in Israel and the Gaza Strip which have appeared on the BBC News website (and we’ll be doing the maths soon), this one stands out both for its sheer banality and for doing the exact opposite of the task entrusted to the BBC in its public purpose remit: “build a global understanding of international issues”.

“Several UN-run schools sheltering thousands of Palestinians fleeing from the Gaza conflict have been hit by shelling since the conflict began.

Deliberately targeting civilians who are sheltering in buildings that have no military purpose is illegal under international law.

Israel denies targeting the schools, but has said some of them were hit accidentally.”

If readers were by now anticipating some sort of discussion on the laws of warfare between experts with differing legal opinions or perhaps even an article outlining the complexities of carrying out a military campaign against a terrorist organization which deliberately targets civilians whilst itself embedded within a civilian population, they would be sorely disappointed.

What they got instead were monologues from two people, neither of whom has any discernible legal training: a history student from Israel and a pediatrician from Gaza.

Perusal of the article quickly shows that the Israeli contributor is actually only there to tick the BBC’s impartiality box. The real aim of this article is to once more persuade BBC audiences that Hamas and other terrorist organisations do not turn the local population of the Gaza Strip into human shields, inter alia by using public buildings such as mosques, hospitals and schools as sites from which to launch attacks, to store weapons and as command centres.

Specifically, we find that this article yet again engages in ‘Wafa washing’ – attempts to persuade BBC audiences that al Wafa hospital in the Gaza City neighbourhood of Shuja’iya was not used by Hamas and other terrorist organisations and that Israeli actions there were unjustified, if not violations of the laws of war. Previous examples of that can be seen here and here.

The contributor from Gaza is described thus:

“Yousef Switi, 61, is a Palestinian paediatrician. He works at the El Wafa Rehabilitation Hospital in Gaza that was hit by Israeli rockets in July. He says targeting hospitals and UN shelters is “criminal”.”

“The Israelis say they have to bomb the hospitals and shelters because there are fighters here, but that is not true. The only people we have are sick people. You never see any fighters or soldiers on the streets.

It’s just not true and yet the rockets keep coming.

For those of us who still have homes it is now better to stay at home and wait for the rockets to end your life, either on purpose or accidentally because the Israelis don’t know what they want to target.

How can they win when they have no military targets, it is just civilians they are firing on? We are not attacking anyone.

We have no government here. We never see Hamas, they are not in front of the people, we can’t talk to them or go to them to ask them to stop the fighting.”

When this round of hostilities commenced there were roughly 20,000 members of Hamas’ Al Qassam Brigades active in the Gaza Strip. Well over 3,300 missiles have been fired from that territory in four weeks. Cross border attack tunnels which took years to build and used hundreds of tons of concrete were constructed: ten of them alone in the neighbourhood of Shuja’iya where al Wafa hospital is situated. And yet Dr Switi is allowed to tell BBC audiences that “you never see any fighters or soldiers on the streets”. 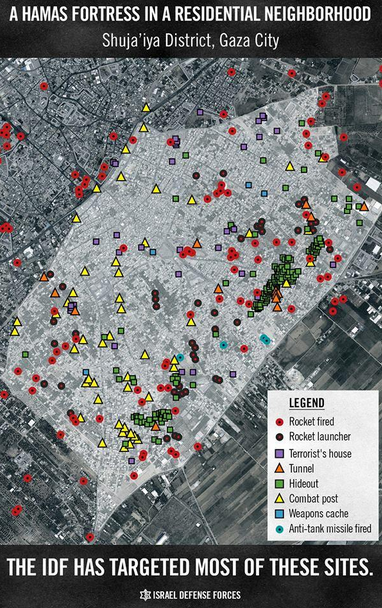 As for Switi’s claims that there were no “fighters” in Wafa hospital; well no matter how many times the BBC tries to push that line, the evidence shows the exact opposite. The video below shows Hamas terrorists firing from al Wafa hospital, along with secondary explosions after it was struck – indicating that weapons and/or explosives were stored there – and the entrance to a tunnel located in the hospital grounds.

Moreover, ample opportunity was given to avoid a strike on al Wafa hospital.

“Hamas transformed Wafa Hospital, a civilian building in the Shuja’iya neighborhood of Gaza City, into a command center, rocket-launching site, observation point, sniper’s post, weapons storage facility, cover for tunnel infrastructure, and a general base for attacks against Israel and IDF forces. Hamas repeatedly opened fire from hospital windows and used anti-tank missiles from the premises. Hamas deliberately and cynically turned the hospital into a legitimate military target.

In response to threat that this posed to IDF forces, the IDF repeatedly conveyed warnings to the hospital staff, Palestinian officials, and international aid organizations, including the World Health Organization, requesting that they act in order to stop the hospital from being used for military purposes, and warning that the IDF will be forced to act if these activities continue. When Hamas’ activities did not cease, already in the first week of the operation, the IDF repeatedly spoke with all of the relevant parties and warned all civilians to leave.” [emphasis added]

The BBC’s interviewee Dr Switi, however, miraculously saw and heard nothing.

Instead of accurately and impartially informing its audiences of what really happened in Shuja’iya in general and at al Wafa hospital specifically – including showing them filmed evidence which has been available in the public domain for two weeks already – the BBC continues to facilitate the promotion of Hamas propaganda.

Moreover, the BBC cynically co-opts the language of “international law” as a prelude to an article which is just its latest contribution to the politically motivated lawfare campaign currently underway. The statement in this article’s opening lines – “Deliberately targeting civilians who are sheltering in buildings that have no military purpose is illegal under international law” – has no purpose but to raise in the mind of the reader that such a scenario may have taken place. That statement is followed by “Israel denies targeting the schools, but has said some of them were hit accidentally”, with absolutely no information provided to readers regarding the legal issues associated with the placement of military targets in or near civilian facilities such as schools – as documented below by France 24.

Those interested in reading some real legal opinions on the topic of Operation Protective Edge and international law – rather than the BBC’s selective amateur interpretations – will find this article helpful. For example:

“Any target being used for military purposes may be attacked (even if it is used for both military and civilian purposes), subject to the principle of proportionality as set forth below. Accordingly, a mosque being used to store weapons is a legitimate target during combat, provided that there is convincing evidence that the mosque is being used for a clear military purpose that is aiding Hamas.”

“Even when there is a chance that citizens will be injured as a result of military action, there is no absolute prohibition against taking such action, as long as the target being attacked is a legitimate military target. The prohibition against such an attack applies only when the collateral damage to civilians is likely to be excessive in relation to the anticipated direct military advantage of destroying the military objective.”

This article is but one example of many to have appeared in the last few weeks illustrating the way in which the BBC’s self-conscription to a political campaign has been allowed to trump its obligations to its funders.