At 08:00 local time on August 8th the 72-hour ceasefire brokered in an attempt to bring an end to the month-long hostilities in Israel and the Gaza Strip expired. Israel had already agreed to its extension but Hamas (contrary to public opinion in the Gaza Strip) officially rejected any continuation of the ceasefire an hour before its end and it had in fact been breached some four hours earlier when terrorists in the Gaza Strip fired two missiles at the Eshkol region at around 04:00. At 08:01 sirens sounded in Ashkelon and the barrage of missile attacks there and elsewhere in Israel resumed. After two and a half hours of intense fire on Israeli villages, towns and cities, Israel announced the resumption of responses to attacks.

So how did the BBC News website cover those events?  The first report to appear on the morning of August 8th was originally titled “Two rockets fired from Gaza despite truce, says Israel” but that headline was subsequently changed to read “Hamas rejects Gaza ceasefire extension” and later still amended to “Gaza ceasefire ends as Israel reports rocket fire“. The report opens: 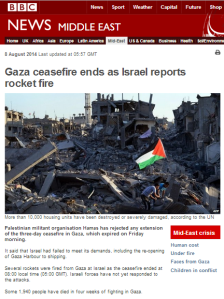 “Palestinian militant organisation Hamas has rejected any extension of the three-day ceasefire in Gaza, which expired on Friday morning.”

Readers are not told that Israel did agree to extend the truce until the article’s thirteenth paragraph. The fact that missiles had been fired into Israel four hours before the ceasefire officially expired is only briefly mentioned in the report’s tenth paragraph and no effort is made to clarify to readers the very relevant fact that – as the previous 68 hours of quiet showed – Hamas can stop all missile attacks by other factions when it chooses to do so.

“Palestinian militants had already launched two rockets toward Israel three hours before the truce expired, the IDF said. Hamas has denied firing them.”

Part of the report relates to the topic of casualty figures, once again citing “Palestinian officials” without proper clarification of the fact that those officials are actually Hamas functionaries. UN statistics are also presented without transparency regarding their source and the political motivations of the NGOs behind those figures.

“Some 1,940 people have died in four weeks of fighting in Gaza.

Palestinian officials say at least 1,875 people have been killed since Israel launched Operation Protective Edge on 8 July with the stated aim of halting rocket fire from militants in Gaza and destroying the network of tunnels it said were used by militants to launch attacks inside Israel.

By the time this report appeared, the BBC had already published its article by Anthony Reuben concerning the need for caution with regard to reported casualty figures from the Gaza Strip. No link to that report or reflection of its content appears alongside the figures presented in this report.

A prominent theme repeated throughout the report is the topic of Hamas demands.

“It [Hamas] said that Israel had failed to meet its demands, including the re-opening of Gaza Harbour to shipping.  […]

A Hamas military wing spokesman earlier called on Palestinian negotiators holding indirect talks with Israeli negotiators in Cairo to refuse any ceasefire extension unless its long-term demands were met. […]

Hamas had been reiterating its calls for the lifting of the blockade of Gaza, the release of prisoners and the end of the Israeli offensive.”

As has been the case in much of the BBC’s recent coverage, audiences are not provided with factual background information regarding the reasons for the implementation of border restrictions by Egypt and Israel and are not told of the implications of any easing of restrictions in terms of the renewed flow of weapons and tunnel-building supplies to the Gaza Strip.

The article closes with amplification of allegations made by Amnesty International.

“On Thursday, the human rights group Amnesty International called for an investigation into what it said was mounting evidence that Israeli forces had deliberately attacked hospitals and health professionals in Gaza. The attacks have left at least six medics dead.”

With the BBC having so far done its utmost to whitewash the topic of Hamas’ use of medical facilities and having failed completely to report on the topic of Hamas’ use of ambulances during the fighting and the role played by the Palestinian Red Crescent Society (cited by AI) as both a secondary source for the UN casualty figures cited earlier and an organization engaged in politically motivated delegitimisation of Israel, readers will of course lack the background information necessary in order for them to be able to view Amnesty International’s claims in their correct context.

Those same allegations by Amnesty International were also featured in another BBC News website’s report on August 8th. The fact that (following two and a half hours of incessant missile fire from the Gaza Strip) Israel responded to those attacks, apparently justified a replacement article for the one above with the last-first headline “Israel air strikes resume in Gaza amid rockets“. The opening sentence also puts effect before cause:

Readers have to trudge down to the report’s fourteenth paragraph before they are inaccurately informed that:

In fact, as noted above, missiles were fired at the Eshkol region at around 04:00 – four hours prior to the ceasefire’s end – not “shortly before” – with the resulting breach of the ceasefire therefore inadequately reported by the BBC.

The crucial information that Israel had agreed to extend the ceasefire is buried in the article’s twenty-second paragraph:

“”Hamas is now continuing to fire towards Israeli civilians, while Israel fully respected the ceasefire and announced it is ready to extend it,” a senior [Israeli] official told the BBC.”

Like its predecessor and many other prior BBC items, this report also presents context-free promotion of Hamas demands.

“The Palestinian militant group Hamas, which dominates Gaza, earlier rejected any extension of the truce, saying Israel had failed to meet its demands.[…]

While Gaza’s 1.8 million inhabitants live, penned in, barely able to make a living – so the argument goes – why should Israelis just across the fence feel any more secure? [from an insert by Wyre Davies] […]

Hamas said Israel had failed to meet its key demands, including the lifting of the blockade of Gaza and the freeing of about 100 prisoners released in exchange for Gilad Shalit in 2011 who have been re-arrested.”

Likewise, despite the earlier appearance of the BBC’s report by its own statistician on the need to view casualty figures with caution, this article again presents such figures with none of the essential background regarding their sources and no link to that earlier BBC report.

“At least 1,922 Palestinians, mostly civilians, have died, according to latest United Nations figures.”

A link is, however, provided to the inaccurate BBC article titled “The hundreds who lost their lives” which was published on the same day. 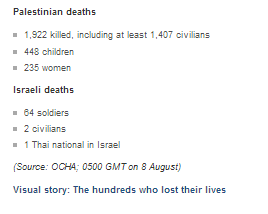 That article by the BBC News statistician concerning the need for caution regarding casualty figures is looking more like a token piece by the day.

The BBC has yet to provide its audiences with the much-needed comprehensive overview of why border restrictions were put in place in the first place and the grave security implications of Hamas’ demand to lift those restrictions, including the potential rearming of terrorist organisations in preparation for yet more hostilities. Whilst it promotes and amplifies Hamas’ demands, the corporation continues to fail to meet it first obligation to BBC audiences to provide information which will enable them to reach informed opinions on this topic.