In the weeks which preceded Operation Protective Edge attacks from the Gaza Strip escalated with 52 missiles fired during June 2014 and 237 missiles and dozens of mortars fired in the first week of July – eighty of them on July 7th alone. Since the commencement of the operation on July 8th 2014, terrorist organisations in the Gaza Strip have fired over 3,500 missiles of various types at Israeli civilian targets. The Iron Dome missile defence system, which only targets projectiles analysed as set to land in populated areas, intercepted some 600 of those missiles at a 90% success rate. Missiles which evaded the Iron Dome and mortars (which the system is not designed to target, although it has had some success in that field too) account for around a hundred missile hits in Israeli civilian communities since July 8th. In the first week of the operation alone, 417 buildings and 228 vehicles were damaged by missiles.

So how did the BBC News website present those facts (all readily available in the public domain) to audiences in its August 17th article titled “Gaza conflict: Peace talks resume in Cairo“? Remarkably, according to the BBC’s account, missiles fired from the Gaza Strip do not seem to land anywhere. 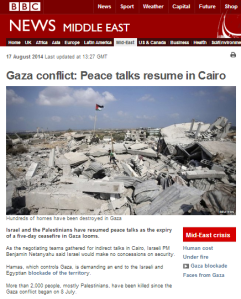 “Israeli civilians have been forced to seek shelter from hundreds of rockets launched at Israel, though many missiles have been blocked by the Iron Dome defence system.”

The actual number of missiles fired is severely under-reported and presented in vague language even though the precise statistics are available. The consequences of those missiles are presented exclusively in terms of Israelis running for cover with no mention of what happens when they land and the fact that around a hundred of them have hit populated areas with destructive results to buildings, infrastructure, property and people. Whilst the Iron Dome system has indeed intercepted “many missiles” thus preventing much more loss of life, injury and damage, that does not – as the BBC’s wording implies – mitigate the effect of those missiles as weapons intended to terrorise Israel’s civilian population and paralyse normal life.

In the paragraph prior to that one, however, readers discovered that in contrast, Israeli weapons do hit the ground.

“Israeli air strikes and shell fire have sharply increased the hardship suffered by civilians in Gaza, with homes destroyed and a lack of water and medical supplies.”

No less interesting is the choice of wording used with regard to casualties: whilst Israelis “have died” – phrasing which does not imply cause – Palestinians are killed – a term which does indicate an outside cause of loss of life.

“Most of the more than 1,900 Palestinians killed are civilians, according to the United Nations.

On the Israeli side, 67 people, all but three of them soldiers, have died.”

Paragraph five of this report states:

“Israel started its offensive in response to militant attacks, including rocket fire, from Gaza.”

Later on, the report presents a different account of the cause of the conflict but with no information given concerning the efforts made by Israel to avoid the hostilities, meaning that audiences are left with no clear understanding of which party initiated them. Likewise, Hamas involvement in the kidnapping and murder of three Israeli civilians is still being airbrushed from the BBC’s version of events.

“The latest Gaza conflict began as tensions escalated over the arrests of Hamas-linked militants blamed by Israel for the abduction and killing of three Israeli teenagers.”

As has been the case throughout BBC coverage of the conflict, the dissolving of the Hamas government in Gaza after the establishment of the Palestinian unity government at the beginning of June and the resulting Palestinian Authority responsibility for attacks emanating from the Gaza Strip is ignored.

“Hamas, which controls Gaza, is demanding an end to the Israeli and Egyptian blockade of the territory.”

In that sentence in the body of the article and separately both in a sidebar of related articles and a similar extended menu at its foot, three links are provided to the inaccurate and inadequate backgrounder on the topic of border restrictions which the BBC produced on August 13th.

“Israel occupied Gaza in 1967 and pulled its troops and settlers out in 2005.

However, it still exercises control over most of Gaza’s borders, water and air space, while Egypt controls Gaza’s southern border.”

Once again, no effort is made by the BBC to explain to audiences that Israeli control of the Gaza Strip’s coastal waters and airspace is in fact part of the Interim Agreement signed by the representatives of the Palestinian people, rather than some Israeli caprice. Likewise, the BBC has made no attempt whatsoever to clarify to audiences that according to the terms of existing agreements between Israel and the PA, there should be no paramilitary groups in the Gaza Strip.

“Except for the Palestinian Police and the Israeli military forces, no other armed forces shall be established or operate in the West Bank and the Gaza Strip.”

“Except for the arms, ammunition and equipment of the Palestinian Police described in Annex I, and those of the Israeli military forces, no organization, group or individual in the West Bank and the Gaza Strip shall manufacture, sell, acquire, possess, import or otherwise introduce into the West Bank or the Gaza Strip any firearms, ammunition, weapons, explosives, gunpowder or any related equipment, unless otherwise provided for in Annex I.”

That information is vital if audiences are to understand why the terms presented by Israel in ceasefire discussions include the demilitarization of the Gaza Strip and why it will not agree to lift the naval blockade and border restrictions for as long as Hamas and other terrorist organisations continue their efforts to import prohibited weapons into the territory. To date the BBC has failed to provide its audiences with that crucial context meaning that they are unable to build an accurate understanding of an international issue to which the BBC has devoted thousands of words.

0 replies on “Hundreds and thousands: BBC under-reports missile attacks on Israel yet again”