Between August 16th and August 20th inclusive the BBC News website’s Middle East page featured an article titled “Dutchman returns Holocaust medal after family deaths in Gaza“. The same article also appeared on the website’s Europe page, as did a filmed version of the report (also shown on television news) by the BBC’s correspondent in The Hague, Anna Holligan, under the headline “Dutchman returns Holocaust medal to Israeli embassy over Gaza deaths“. 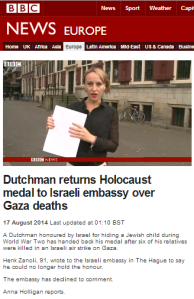 “A Dutchman honoured by Israel for hiding a Jewish child during World War Two has handed back his medal after six of his relatives were killed in an Israeli air strike on Gaza.

Henk Zanoli, 91, wrote to the Israeli embassy in The Hague to say he could no longer hold the honour.

He said an Israeli F-16 had destroyed his great-niece’s home in Gaza, killing all inside, in the recent offensive. [….]

His great-niece is a Dutch diplomat who is married to Palestinian economist Ismail Ziadah, who was born in a refugee camp in central Gaza.

Mr Ziadah’s mother, three brothers, a sister-in-law and nine-year-old nephew were all killed after their family home was hit by Israeli aircraft.”

“In it [a letter] he says his great-niece’s family home in Gaza was destroyed by an Israeli F16, killing everyone inside.”

Mr Zanoli’s story got considerable exposure from other news organisations too, including the New York Times. But, as Elder of Ziyon reported, there was also someone else present in the house at the time of the incident on July 20th.

The Ziadah family’s “guest” – as he was described by the PCHR – was Mohammed Mahmoud al-Maqadma, aged 30, who was a member of Hamas’ Al Qassam Brigades.

That information was in the public domain for almost a month before BBC News ran this report. It is a very relevant part of the story which provides context important to proper audience understanding. And yet, the BBC elected to refrain from providing that information to readers and viewers.

“Henk Zanoli ends his letter by saying the only way he could ever take the Righteous Among Nations medal back would be if Israel granted all those living under the control of the state the same political, social and economic rights and opportunities.”

That of course suggests to viewers that at present that is not the case – which is misleading to viewers.

All Israelis regardless of religion, gender or ethnic background of course enjoy the same political, social and economic rights and opportunities. The residents of PA controlled areas of Judea & Samaria (areas A and B) and of the Gaza Strip do not live under the control of the Israeli state: their political, social and economic rights are controlled by the Palestinian Authority. The residents of Area C (less than 5% of the total Palestinian population) do indeed still lack full rights because the agreements signed by the PA which created the situation whereby Israel retains control over Area C were intended to be a temporary step on the way to a negotiated solution to the conflict. Unfortunately, the Palestinian Authority chose to end negotiations by initiating the second Intifada.

Whilst Mr Zanoli may prefer to ignore the real reason why a minority of Palestinians still lack some rights, there is no reason for Anna Holligan to uncritically amplify his misleading statement to BBC audiences.