On August 30th the BBC’s Media and Arts correspondent David Sillito reported on the appointment of Rona Fairhead to the position of chair of the BBC Trust. In his filmed report Sillito made the following statement: 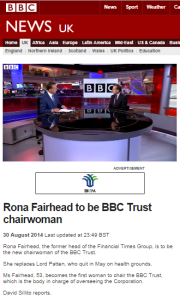 “The BBC chair is a big job. […] You are overseeing the BBC but you are also in many ways responsible for being the cheerleader, defending it when politicians have got something to say about the BBC.”

A very similar version of that statement also appeared in a written article on the BBC News website’s Entertainment and Arts page on August 31st.

“Being in charge of the BBC Trust is a “big job”, said BBC media and arts correspondent David Sillito.

“You are overseeing the BBC, but you are also in many ways responsible for being the cheerleader, defending it when politicians have got something to say about the BBC,” he added.”

Obviously the first interesting point about that statement is that Sillito appears to rule out the possibility that politicians might have something valid to say about the BBC which may in fact not merit defence on the part of the Trust’s chair.

Secondly, it is particularly remarkable that the role’s main function does not appear to enter into the BBC’s media correspondent’s understanding of the job.

The Royal Charter defines the role of the BBC Trust as follows:

“Within the BBC, there shall be a BBC Trust and an Executive Board of the BBC. These two bodies shall each play important, but different, roles within the BBC. In summary, the main roles of the Trust are in setting the overall strategic direction of the BBC ,including its priorities, and in exercising a general oversight of the work of the Executive Board. The Trust will perform these roles in the public interest, particularly the interest of licence fee payers.” [emphasis added]

“Role of the Trust

Guardians of the licence fee and the public interest

The Trust is the guardian of the licence fee revenue and the public interest in the BBC.

The Trust has the ultimate responsibility, subject to the provisions of this Charter, for—

(a) the BBC’s stewardship of the licence fee revenue and its other resources;

(b) upholding the public interest within the BBC, particularly the interests of licence fee payers; and

(c) securing the effective promotion of the Public Purposes.”

It would appear that one of Ms Fairhead’s first tasks may have to be to clarify to BBC staff why she is there and exactly whose interests her position is tasked with safeguarding.

Like Loading...
Tags from the story
BBC, BBC News, BBC Online, BBC Trust, David Sillito, Rona Fairhead, Uncategorized
Written By
Hadar Sela
More from Hadar Sela
As all regular readers of the Guardian and its ‘Comment is Free’...
Read More