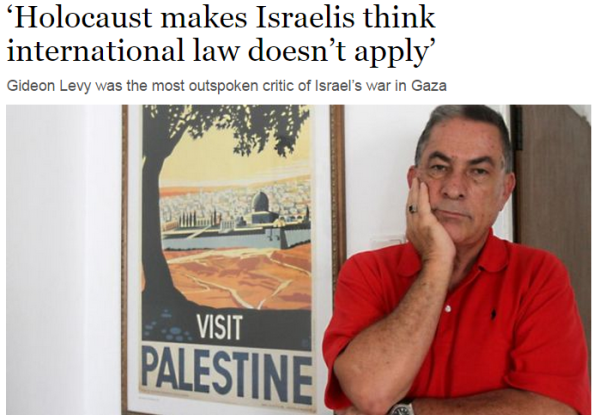 On a national level, “Golda Meir said that after the Holocaust, Jews have the right to do anything they want,” Levy continues. “The Holocaust makes Israelis think international law doesn’t apply to them, because they are the ultimate victims of history; the only victims.”

Though Gidon Levy previously told CAMERA in an email that he had no source for the quote in question, we’ve been able to determine there is a source for at least a variation of the alleged quote – the late Shulamit Aloni. However, even Aloni isn’t clear on the details or the exact origin of the alleged Meir quote, and so even this “source” only represents hearsay.
Additionally, in tracing Aloni’s retelling of the alleged quote, it’s clear that it has changed considerably over the years.
Aloni, 2002
Talking at a Gush Shalom (A left-wing NGO) conference in Tel Aviv in January 2002, Aloni stated:

Golda said that ‘after the Eichmann Trial we have the right to do everything’. During the Lebanon War Begin said that ‘no one has the right to tell us what to do, definitely not those who bombed Dresden’. (Translated from the original Hebrew)

Aloni, 2009
In 2009, Aloni published an op-ed in [Hebrew] Haaretz which opened with the alleged quote by Meir.

[Meir said] after the Eichmann trial, now, when everyone knows what they did to us, we can do anything we want, and no one has the right to criticize us and tell us what to do. (Translated from the original Hebrew)

Levy, 2014:
Again, let’s remember that this is the quote Levy used when speaking to Lara Marlow of The Irish Times last week.

[Meir said]…after what the Nazis did to us, we can do whatever we want

Note that in the original 2002 telling, the emphasis is on the Eichmann Trial and not, as Levy presents it, as “The Holocaust.”  Additionally, it is Begin (and not Meir) who is attributed as saying “no one has the right to tell us what to do.” Also, Begin was likely referring to how the allies attacked the German city of Dresden during WWII, and was not referencing the Holocaust. In other words, even Begin wasn’t justifying Israeli actions by virtue of what happened to Jews during the Holocaust, but was merely comparing how the Western Allies and Israel conducted their respective wars.
As we’ve demonstrated, Aloni would later, in 2009, meld the two quotes into one, and attribute them both to Meir, while delicately changing the emphasis.
Finally, we have no way to verify if Aloni is accurately quoting Meir in either version, as she has never, as far as we can tell, provided details regarding when and where Meir uttered these words. We also can’t determine (again, assuming that some variation of the alleged quote is accurate) if the former prime minster was taken out of context.  Of course, Levy and the Irish Times columnist love the alleged quote because it fits nicely with their belief in immutable Israeli villainy – a state so immoral that it cynically exploits the Holocaust to justify cruelty and wanton violence against Palestinians.
Bottom line: The Irish Times published a highly dubious quote to support a crude and ugly caricature of the Jewish state, one which appeals to the extreme left narrative fancied by Levy and his political fellow travelers within the European media elite.