Hidden in the final sentence of a Guardian/Reuters report on Sept. 20th, Egypt to host Gaza talks between Palestinian factions, on upcoming reconciliation talks between Fatah and Hamas and subsequent indirect talks between Hamas and Israel, is a remarkable accusation – albeit one not surprising to those familiar with Hamas‘s widespread human rights violations against their own civilians.

We’ll show the final six paragraphs of the Guardian/Reuters article to highlight the placement of the sentence in question, which we’ve emphasized with a red line: 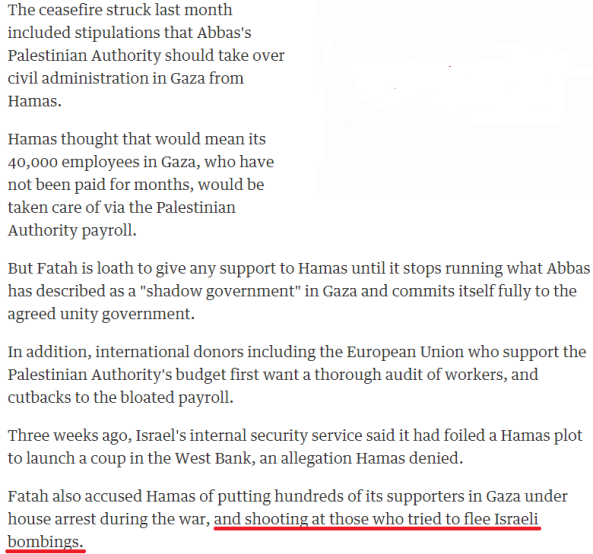 Remember that this accusation regarding Hamas’s illegal use of their own citizens as human shields – a widespread practice (all but ignored by the Guardian’s Peter Beaumont) designed to achieve a propaganda victory stemming from increased civilian causalities – comes from Palestinian leaders, and not Israelis.
Further, the specific claim – that Hamas used lethal force to prevent Palestinians from fleeing Israeli attacks, even after IDF warnings – is supported by sources in Gaza, as reported recently by Mudar Zahran at Gatestone Institute.
Zahran quotes one university student in Gaza thusly:

Hamas imposed a curfew: anyone walking out in the street was shot. That way people had to stay in their homes, even if they were about to get bombed. Hamas held the whole Gazan population as a human shield.

Here’s another quote Zahran provides from a different Palestinian student:

When people stopped listening to Hamas orders not to evacuate and began leaving their homes anyway, Hamas imposed a curfew: anyone walking out in the street was shot without being asked any questions. That way Hamas made sure people had to stay in their homes even if they were about to get bombed.

Another Gazan (a health professional) explained the following to Zahran:

The Israeli army sends warnings to people [Gazans] to evacuate buildings before an attack. The Israelis either call or send a text message. Sometimes they call several times to make sure everyone has been evacuated. Hamas’s strict policy, though, was not to allow us to evacuate. Many people got killed, locked inside their homes by Hamas militants. Hamas’s official Al-Quds TV regularly issued warnings to Gazans not to evacuate their homes. Hamas militants would block the exits to the places residents were asked to evacuate. In the Shijaiya area, people received warnings from the Israelis and tried to evacuate the area, but Hamas militants blocked the exits and ordered people to return to their homes. Some of the people had no choice but to run towards the Israelis and ask for protection for their families. Hamas shot some of those people as they were running; the rest were forced to return to their homes and get bombed. This is how the Shijaiya massacre happened. More than 100 people were killed.

The fact that such explosive quotes, attesting to Hamas’s cynicism and appalling cruelty, fell outside the journalistic radar of the Guardian’s reporters in Gaza represents more evidence supporting claims by former AP correspondent Matti Friedman (in his viral essay) that the mainstream media is simply not interested in presenting Palestinians as anything other than victims of Israeli oppression.