Those following the BBC’s commemoration of the World War One centenary may have noticed this Tweet on September 20th.

The link leads to a feature on the BBC’s iWonder webpage titled “Does the peace that ended WW1 haunt us today?” which is presented by the BBC News diplomatic correspondent Bridget Kendall.  Launched in January 2014, the iWonder brand was described by the BBC as a project intended to “educate and inform”.

“To coincide with the start of the BBC’s World War One season the BBC today launches a range of exciting digital content under a new brand called BBC iWonder.

iWonder is the new brand from the BBC designed to unlock the learning potential of all BBC content. Interactive guides – curated by experts and BBC talent including Dan Snow, Kate Adie, Ian McMillan and Neil Oliver – are the first phase of this initiative.[…]

Tim Plyming, Executive Producer for BBC Knowledge & Learning says: “Digital plays a central role in the BBC’s World War One season coverage and we’re really excited to bring audiences a range of compelling perspectives of the war. The guides span life in the trenches to poetry and propaganda and we hope each one will educate and inform the curious novice as well as the history buff.” “

Audiences might therefore reasonably expect that the content posted on the iWonder site would be historically accurate. 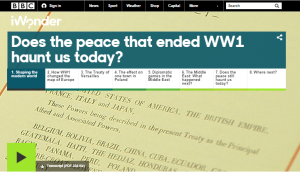 The feature is composed of eight sections and section five is entitled “Diplomatic games in the Middle East”. There audiences are given potted versions of the Hussein-McMahon Correspondence, the Sykes-Picot Agreement and the Balfour Declaration.

However, absent from this section (and all others) is any mention of the San Remo Conference, the Treaty of Sèvres or the terms of the Mandate for Palestine which Great Britain was entrusted to administer on behalf of the League of Nations. Instead, a map appearing in that section inaccurately informs BBC audiences that “Britain took control of Palestine”.

Veteran BBC watchers will not be surprised by the BBC’s erasure of the agreements and treaties which form the legal foundations of the Jewish state. In fact, a search for ‘San Remo Conference 1920’ on the BBC News website turns up just one result – and that is in the corporation’s profile of Syria. BBC audiences searching the website for ‘Treaty of Sèvres 1920’ will find a result pertaining to Iraqi Kurdistan and a reference to it in an article about the Armenian church in Turkey but nothing to inform them of that treaty’s commitment to the establishment of a Jewish National Home in Palestine.

Section six of the feature is titled “The Middle East: What happened next?”. There – with no mention of the fact that the territory concerned had originally been part of that assigned to the creation of the Jewish National Home – readers are informed that:

“In Jordan, Faisal’s brother Abdullah declared himself Emir. The British acquiesced, keen to have a friendly regime that would not threaten oil pipelines coming from Iraq. Jordan became independent in 1946, and Abdullah’s descendants still rule over the country today.”

The sub-section titled “In Palestine” informs BBC audiences that:

“The numbers of Jews emigrating to Palestine increased under British supervision, especially after Hitler came to power in 1933. Arab resentment also increased.”

The average reader of that paragraph would understand it to mean that Britain facilitated immigration of Jews to Palestine as a response to the persecution of Jews in Europe. Of course the historic facts show that in fact the British limited Jewish immigration (though never Arab immigration) and Jewish land purchase throughout much of the mandate period, with the 1939 White Paper – approved by the House of Commons just weeks before the outbreak of World War II – restricting immigration to 75,000 over a period of five years and ruling that illegal immigrants would be deducted from the quota and immigration would be halted at the end of the five-year period.

“After the Holocaust, in which over 6 million Jews were killed, there was a surge of Jewish immigration to Palestine. Britain struggled to contain the crisis, and handed the task of deciding the future of Palestine to the United Nations.

The UN voted to divide Palestine into two states: one Arab, one Jewish. In 1948, Israel declared its independence; the first Arab-Israeli war began the moment the British left.”

Once again we see that the BBC continues to mislead its audiences by pretending that the 1947 Partition Plan is a thing. UNGA resolution 181 was of course a non-binding recommendation, the implementation of which depended upon the agreement of the parties concerned. Whilst Jewish representatives accepted the proposal, the Arabs rejected it outright meaning that it has no contemporary relevance whatsoever. Likewise, the BBC’s suggestion that violence commenced with the departure of British forces in May 1948 is of course an inaccurate representation of history.

Section seven of the feature is titled “Does the peace still haunt us today?” and it includes a contribution from Professor Beverley Milton-Edwards. Those familiar with Milton-Edwards’ work and with her history of associations with Alastair Crooke and his ‘Conflicts Forum’ will not be surprised by the political overtones of her contribution which includes the specious claim that “radical Islamism” arose as “a reaction to foreign intervention and control”.

The trouble is, of course, that the majority of BBC audience members hoping to be educated or informed by this feature will not be aware of Milton-Edwards’ agenda and – in contradiction of BBC editorial guidelines on impartiality – no attempt is made to inform them of that important factor.

This feature’s distortions, inaccuracies and omissions will come as no great surprise to anyone familiar with the BBC’s existing record of representation of Middle East history in general and the establishment of Israel in particular. Although BBC audiences might expect editors of a feature specifically intended to “educate and inform” to take special care to adhere to BBC guidelines on accuracy and impartiality, political motivations have once again triumphed over historical fact in this feature. That fact is particularly worrying given that presumably the item is intended to remain in the public domain for years to come as part of the BBC’s “historical records“.