Since July a prevalent theme in BBC reporting on the recent conflict in Israel and the Gaza Strip has been the context-free amplification of Hamas’ demands to lift border restrictions imposed by Egypt and Israel in response to the activities of that terror organisation and others.

Initially, Hamas declared that the lifting of border restrictions was a precondition to any negotiations on a ceasefire and the BBC provided plenty of publicity for that obviously unrealistic demand – see examples here, here, here and here. Notably, the BBC also adopted Hamas terminology as part of its amplification of the terror group’s demands and began to inaccurately describe very specific restrictions on the entry of dual-use goods into the Gaza Strip as a “siege”.

Later, Hamas found itself obliged to climb down from that particular tree and demands for the lifting of border restrictions joined others, such as the construction of a seaport and an airport, as part of what Hamas promoted as its conditions for a long-term ceasefire. Those demands were also given ample promotion by BBC correspondents – see examples here, here, here, here, here and here.

Even before the August 26th ceasefire agreement was reached the BBC’s focus turned to promoting the topic of the lifting of border restrictions via the subject matter of reconstruction of buildings and infrastructure in the Gaza Strip. With BBC representation in the area having returned to pre-conflict staffing levels, most of that particular advocacy campaign has been carried out by the Jerusalem Bureau’s Yolande Knell who has in recent weeks produced several ‘reporter in the rubble’ items all designed to impress upon BBC audiences that those same border restrictions must be lifted in order to facilitate the reconstruction of houses destroyed or damaged during the conflict. Examples can be seen here, here and here.

On September 18th the BBC Radio 4 news magazine ‘PM’ broadcast an audio item by Yolande Knell (available for a limited period of time from 50:52 here) which recycles material from two of her previous reports for television and the BBC News website.

The programme’s presenter Eddie Mair introduces the item with citation of Gaza Strip casualty figures which fail to distinguish between civilians and combatants.

EM: “The human toll of the most recent violence between Israel and Palestinian militants in Gaza is well known. More than 2,100 Palestinians were killed. Sixty-six Israeli soldiers and seven civilians were killed. As our correspondent Yolande Knell reports, the physical damage to Gaza is also significant.”

“There’s a single bulldozer working to clear a path through an enormous pile of rubble in Shuja’iya in Gaza. The scale of destruction here is overwhelming. Last month this area was pounded with tank fire and airstrikes as the Israeli military said it set out to destroy a network of tunnels used by militants for cross-border raids and storing rockets. Dozens of local people were killed and thousands were left homeless.”

There is of course absolutely no editorial justification for Knell’s use of the phrase “as the Israeli military said”. Knell and her editors know full well that Hamas turned the Shuja’iya neighbourhood into a district overflowing with military targets including missile launching sites and the entrances to some ten cross-border attack tunnels. There is also no reason to assume that Knell is unaware of the fact that among the “dozens of local people” killed in Shuja’iya were a significant number of terrorists who engaged in fierce fighting with Israeli forces tasked with decommissioning the tunnels. And yet Knell deliberately refrains from communicating that fact to listeners, who next hear a local man – who cannot have been unaware that his neighbourhood had been used by terrorists as a missile launch site – feigning surprise that those sites came under attack.

Man: “I was shocked. I didn’t expect to see my house, my street, my neighbours’ houses destroyed like this. Now the war is ended but really we suffer from now here diseases. We suffer from no water, no electricity. Everything is destroyed really.”

Knell: “Abdel Karim Abu Ahmed is an English teacher. As the chickens run through the ruins of his house he shows me where he sleeps on a mattress alongside his brother and sons.”

Abdel Karim Abu Ahmed the English teacher also appeared in Knell’s recent feature on the BBC News website which included an aerial photograph of the location of his house in Shuja’iya. 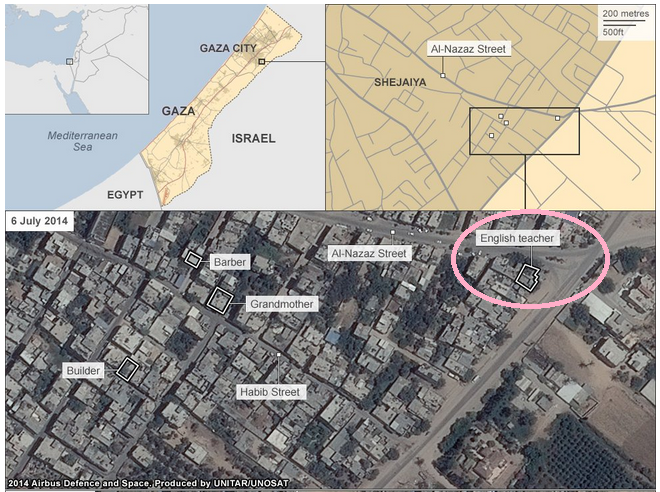 As can be seen from the IDF’s aerial map of the neighbourhood, at least five missiles were fired from close proximity to Abu Ahmed’s house and yet Knell neglects to inform listeners of that fact and amplifies his feigned surprise at the consequences. 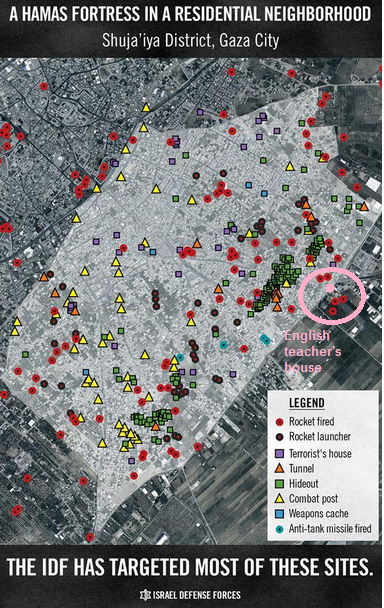 Knell continues with promotion of the main purpose of her report.

“But so far, nothing’s changed to ease the blockade of Gaza imposed by Israel and Egypt and that means reconstruction can’t yet begin. By the Kerem Shalom crossing lorries are bringing in commercial goods – mainly food – but Israel bans the import of building materials for private use, saying that militants use them to build tunnels.”

Again, Knell’s presentation of Hamas’ proven misappropriation of construction materials for the purposes of terror in terms of “Israel says” has no editorial justification. She also fails to clarify that construction materials for the private sector were imported into the Gaza Strip until last October when a cross-border tunnel was discovered. Knell continues with a Norwegian Refugee Council official who also appeared in one of her previous filmed reports.

“Now international aid agencies are calling for a rethink. Ruth Allan represents the Shelter Cluster. It’s worked out there would still be a housing crisis in Gaza even if this crossing ran at its full capacity.”

Allan: “We’ve calculated that it would take 20 years to rebuild the homes. This is not including schools, not including hospitals, not including any other civilian infrastructure – oly houses. Basically 17 thousand homes were destroyed in this last war. Also, there is huge population growth and therefore there is a shortfall of homes.”

Next comes promotion of propaganda straight from the Hamas horse’s mouth.

“In Gaza City I meet another Palestinian inspecting his damaged house. Mahmoud Zahar knows that he was Israel’s intended target here as a founder and leader of the Islamist movement Hamas. He insists the recent conflict was a great victory.”

Al Zahar: “Now I think if we are going to make any election in any area in Palestine, Hamas will be number one – just because this is the first war that Israel failed to achieve any of its goals. Destruction of the tunnels: tomorrow we are going to start doing more tunnels. Tunnels was a self-defence. Rockets was a self-defence. Resistance was our style. Israel started the war and they finished by big losses.”

Knell makes no effort to ensure that listeners are not misled by the inaccurate claims of a man who, despite being on record as having legitimised the murder of Jewish children anywhere in the world and despite UK legislation on the encouragement of terrorism, is apparently still deemed by the BBC to be an appropriate interviewee with something to contribute to audiences. She continues:

“Such attitudes have angered the Palestinian President Mahmoud Abbas who heads a unity government backed by Hamas. He’s warned they hamper efforts to rebuild Gaza. As far as Israel’s concerned, they justify its caution, particularly when it comes to construction supplies. Mark Regev is the Israeli prime minister’s spokesman.”

Regev: “As to materials that could be syphoned off by Hamas to once again rebuild their terror machine, well we’re taking now to the international community – to the United nations, to relevant governments – of how we can have mechanisms in place that will prevent Hamas stealing what is ultimately supposed to reach the people of Gaza. I mean the amount of cement that went into those terror tunnels could have built a dozen hospitals; let’s be clear.”

“Back in Shuja’iya residents are trying to clean up their homes. While Gaza’s now calm, they know there’s still no political solution to its underlying problems and now they’re feeling them more acutely than ever.”

Despite al Zahar’s clear declaration of intent to re-engage in the construction of terrorist infrastructure, Knell fails to join the dots and clarify to listeners that there is no chance of success for any “political solution” to the Gaza Strip’s “underlying problems” which does not include adherence to the PA’s existing agreements with Israel – i.e. the disarming of all terrorist organisations in the Gaza Strip. Neither is she apparently concerned by the fact that her own role in the BBC’s repeated advocacy for Hamas’ political campaign to lift border restrictions is likely to contribute to the current calm in the Gaza Strip being very short-lived.