The lead article on the BBC News website’s Middle East page on October 27th (also appearing on the site’s main homepage) was headlined “Qatar officials dismiss IS funding claims“. Coincidentally or not, the report appeared just hours before the Emir of Qatar is due to arrive in the UK for a three-day official visit aimed at “enhancing bi-lateral relations” between the two countries. 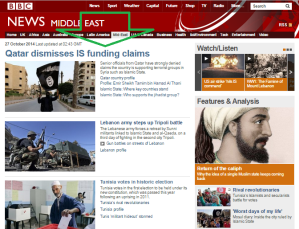 BBC audiences are reassured in the report’s opening sentences that:

“Senior officials from Qatar have strongly denied claims the country is supporting terrorist groups in Syria such as Islamic State.

They told the BBC that Qatar had only provided support to moderate militants, in co-ordination with the CIA and other Western and Arab intelligence agencies.

Strict financial controls had been put in place, they added.”

So that’s alright then. Or maybe not….

The article goes on to state:

“In the past, wealthy individuals in the emirate are believed to have made donations and the government gave money and weapons to hardline Islamist groups in Syria. Doha is also believed to have links to the al-Nusra Front, an al-Qaeda affiliate.

But officials, including Qatar’s director of Intelligence, told the BBC the country had nothing to hide over its support for groups in Syria fighting President Assad’s regime.

The BBC’s Frank Gardner said the officials conceded that there had been constant shifts in allegiances in Syria’s civil war and some people previously considered moderate had later joined hard line Islamist militias.

They said since Qatar’s intelligence agency had taken over responsibility for its Syria policy in 2012, the new financial controls had been brought in and a number of suspect financiers had been arrested.”

So is the BBC trying to tell us that the Al Qaeda-linked Al Nusra Front with its known (not “believed” as the BBC claims) links to Qatar should be viewed as one of the groups of “moderate militants” which Qatar says it supports rather than as a terrorist organisation? Notably Frank Gardner did not find it necessary to inform readers that the UN, US, UK, Australia and Turkey have all designated the Al Nusra Front.

Clearly readers of this report are being herded towards the belief that lax Qatari regulation which gives a green light to terror financing is now a thing of the past. However, the US obviously does not believe that is the case, as the WSJ reported just four days before the publication of this BBC report.

“The U.S. said Qatar and Kuwait aren’t doing enough to block the financing activities of the extremist group Islamic State, exposing a sore point in a coalition formed to fight the militants. […]

In the Gulf region, Kuwait has set up a financial intelligence unit, and Qatar has passed a law regulating charities blamed for funneling cash to extremists. Kuwait arrested one of its citizens on the list as he returned from Qatar in August, as well as at least two other financiers, Kuwaiti officials have said.

And as the Telegraph reported at the beginning of this month:

“An al-Qaeda financier jailed for his role in funding the mastermind behind 9/11 is once again raising money for Islamist terrorists after being freed by the Qatari authorities, The Telegraph can disclose.

Khalifa Muhammad Turki al-Subaiy – a Qatari citizen who was said to have provided ‘financial support’ for Khalid Sheikh Mohammed – was jailed for terrorist offences in 2008 but released after only six months.

He is now accused of funding Islamist terrorists fighting in Syria and Iraq.”

Of course the very pertinent issue of Qatar’s financing of radical Islamists in the Middle East is by no means limited to Syria and Iraq or to the activities of individuals.

Moreover, the new overlords of Tripoli are allies of Ansar al-Sharia, a brutal jihadist movement suspected of killing America’s then ambassador to Libya, Christopher Stevens, and of trying to murder his British counterpart, Sir Dominic Asquith.

Barely three years after Britain helped to free Libya from Col Gaddafi’s tyranny, anti-Western radicals hold sway. How could Britain’s goal of a stable and friendly Libya have been thwarted so completely?

Step forward a fabulously wealthy Gulf state that owns an array of London landmarks and claims to be one of our best friends in the Middle East.

Qatar, the owner of Harrods, has dispatched cargo planes laden with weapons to the victorious Islamist coalition, styling itself “Libya Dawn”.”

And as readers are no doubt aware, Hamas (designated by the US and the EU, among others) is also on the list of Qatari protégés, with Fatah apparently also now angling for Qatari cash.

Whilst Qatari officials may well be delighted by this latest BBC-supplied opportunity to amplify their denials of funding of the West’s current bête noire – ISIS – the emirate’s policy driven approach to the funding of Islamist extremists should be seen in the context of a statement made by the country’s Emir during an interview with CNN last month.

“We don’t fund extremists,” the Emir told CNN’s Christiane Amanpour on Thursday. “If you talk about certain movements, especially in Syria and Iraq, we all consider them terrorist movement.”

Qatar’s selective and opportunistic approach to defining terrorism – and hence what constitutes terror financing – should of course also be viewed in the context of its financial relations with the West.

“… it is vital to remember Qatar’s role as a provider of natural gas to Europe, and its investments in both Europe and the U.S. Qatar sits on 26 trillion cubic meters of natural gas—the world’s third largest reserve. It has a sovereign wealth fund of $85 billion. And European countries are currently seeking private investment as they emerge out of austerity into growth.

The Qataris have money to spend, and have already invested heavily. They own, for example, London’s tallest skyscraper, the Shard, and London’s most exclusive shop, Harrods. This is a friendship which the British and other Europeans naturally wish to preserve. If this means permitting Qatar to play the outsize role it seeks in Mideast diplomacy, there are few signs of objection from the Europeans. If it includes championing an organization the European Union considers a terrorist group, at least one aligned against Israel, this doesn’t seem to present too much of a problem either.

Among Western European countries, the notion that the appropriate response to terror groups is dialogue, or at least keeping the possibility of dialogue open, is prevalent. Thus the Qatari desire to promote Hamas is easy to accept.”

It seems that the self-styled “standard-setter for international journalism” is quite happy to go along with Qatar’s attempts at damage control intended to mitigate the growing political pressure on the Emir’s British hosts by failing to fully inform BBC audiences on the topic of Qatari funding of Hamas, Jabhat al Nusra and other terrorist organisations or the activities of individuals with links to the Qatari regime.

0 replies on “BBC playing wingman for Qatar’s damage control in the UK?”