In the first three installments of this post (see ‘related articles’ below) we documented BBC News website coverage of the first thirty days of Operation Protective Edge. Part four relates to the next ten days: August 7th to August 16th 2014 inclusive.

Content on the website included written news reports and written ‘Features and Analysis’ articles as well as filmed items presented as stand-alone reports and additionally often embedded into the written articles. Those filmed items also appeared on BBC television news programmes and hence give us an idea of what worldwide audiences were being shown and to what extent the BBC lived up to its claims of “equal coverage” of the two sides to the conflict.

A small amount of content which appeared on the BBC News website at the time has since become unavailable, but below are the vast majority of the reports offered to the website’s visitors. We are not including here the many reports concerning demonstrations relating to the conflict in Europe and elsewhere which appeared on the Middle East page: that topic will be covered separately. Also not included in this chapter are three separate filmed reports about NHS activities (delegations to the region, donations of equipment) which appeared on the BBC News website’s Middle East page on August 9th, 11th and 12th.

Israel offers Gaza truce extension but Hamas has yet to agree

Graphic content: How media differ on use of Gaza images  BBC Monitoring

After the Gaza ceasefire: Hyper-tense and under fire   Wyre Davies (discussed here)

Gaza conflict: The hundreds who lost their lives  (discussed here) 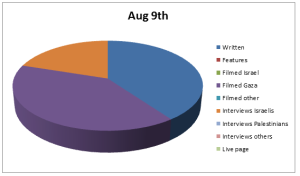 Israel ‘very restrained’ with its offensive in Gaza  Danny Ayalon

Gaza conflict: Israel refuses to negotiate while ‘under fire’  Kevin Connolly in Gaza 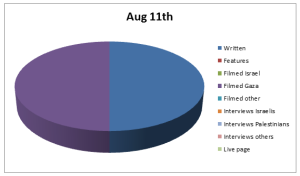 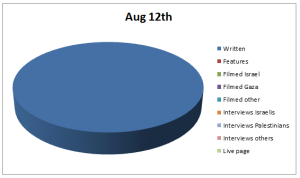 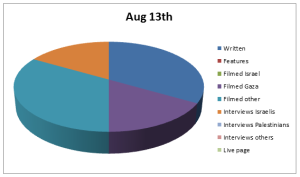 Clearly the most striking aspect of this period of coverage of the conflict is the sudden decline in the number of reports produced by the BBC in comparison with the previous thirty days. Two factors contributed to that drop: like much of the foreign media the BBC apparently assumed that the August 5th ceasefire was going to hold and began moving journalists who do not normally cover the region, but had been ‘parachuted in’ to provide back up to its Jerusalem Bureau team, out of the area. Concurrently, the ISIS story in Iraq and Syria began to gather pace and resources were diverted to covering that issue.

The most obvious effect of those changes is that after the withdrawal of Israeli ground troops from the Gaza Strip on August 5th and despite the breakdown of the ceasefire of that date and the continuation of missile fire into Israel, BBC audiences saw only one filmed report depicting the situation as far as civilians in Israel were concerned between August 7th and August 16th. They did, however, see twelve filmed reports from the Gaza Strip during that period. 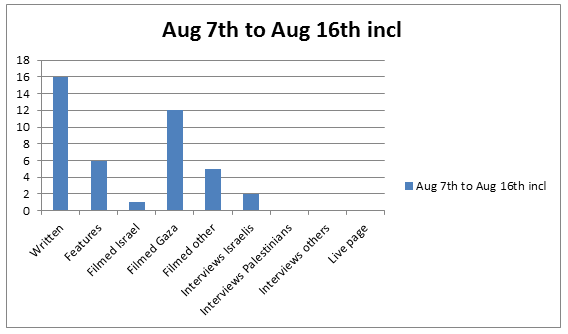 By August 16th visitors to the BBC News website (and television audiences) had seen almost three times as much filmed coverage from the Gaza Strip as they had from Israel (37.5 reports compared to 100.5) since the beginning of the conflict.

The major theme dominating BBC reporting during the period from August 7th to August 16th remained the vigorous amplification of Hamas’ demands concerning the lifting of border restrictions and the construction of a seaport. Missile attacks on Israel were severely under-reported or ignored and ceasefire violations by terrorist groups downplayed or distorted. The amplification of the agendas of NGOs engaged in political warfare against Israel continued, as did the promotion of claims of ‘war crimes’.

A particularly notable event during this period was the appearance of the article by the BBC News Head of Statistics on the issue of Gaza casualty figures after an entire month of context-free BBC citation of Hamas-supplied data. The fact that the article soon underwent changes which diluted its original message as a result of the application of outside political pressure is highly significant and of course reflects very badly on the BBC’s supposed commitment to accuracy and impartiality.

‘From Our Own Correspondent’: a test case for BBC claims of ‘equal coverage’