Any expectations that the BBC might have learned something from the public outcry over its previous miserable reporting of the terror attack in Jerusalem on October 22nd were proved premature on November 5th when another attack using the same modus operandi took place in the city.

Ibrahim al Akari ploughed the van he was driving into a group of people at the Shimon HaTsadik light rail stop. He then continued, driving the vehicle into an additional group of people before getting out of the vehicle and attacking passers-by with a metal crow-bar. One person was killed – Border Police Officer Jidan Assad from Beit Jann – and thirteen others injured – two of them seriously. Police shot and killed the Hamas-affiliated terrorist at the scene and Hamas later claimed responsibility for the attack.

So how did the BBC portray that incident? Yet again the BBC News website’s initial reports gave the impression of a road traffic accident. 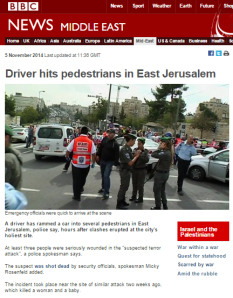 Unnecessary and misleading punctuation did however still appear in the body of the obviously hastily composed version of the report:

“At least nine others were injured in the “suspected terror attack”, police spokesman Micky Rosenfeld.”

Similarly, a caption to one of the photographs used to illustrate the article states:

“The authorities have called it a “terrorist” attack”

The report described the location of the attack as follows:

“A driver has rammed a car into several pedestrians in East Jerusalem, killing one person, hours after clashes erupted at the city’s holiest site.” [emphasis added]

That inaccurate description of the location of the Shimon HaTsadik light rail station is misleading to audiences.

“Israeli media reports say the driver – named as Ibrahim al-Akari – was from Shuafat refugee camp in the east of the city and was a supporter of the Palestinian Islamist group Hamas. However, this has not been confirmed.”

In fact, the Israeli media has described al Akari as being from Shuafat – but has not stated whether the intention is the refugee camp or the village of the same name. With Hamas having already produced a ‘martyrdom poster’ displaying its own logo, the BBC’s caution is clearly redundant.

No mention was made of the fact that just days before this latest incident the PA president sent a letter of condolence to the family of the terrorist who attempted to murder Rabbi Yehuda Glick which described him as a martyr who “rose to Heaven while defending our people’s rights and holy places”. The BBC also failed to report incitement in the official PA newspaper and social media.

Viewers of BBC television news on the afternoon of November 5th saw a filmed report by Yolande Knell, the website version of which also misled BBC audiences with regard to the location and nature of the incident in both its title – “Driver hits pedestrians in East Jerusalem” – and its original synopsis.

“A driver has rammed a car into several pedestrians in East Jerusalem, police say, hours after clashes erupted at the city’s holiest site.

At least three people were seriously wounded in the “suspected terror attack”, a police spokesman says.”

In the original report at that URL (it has since been replaced by another one) Knell described the vehicle driven by Akari as a “car” rather than a van, wrongly informed viewers that only one person – “a baby girl” – was killed in the similar October 22nd terror attack when in fact there were two casualties and again inaccurately claimed that the Israeli media reported that Akari came from “the Shuafat refugee camp”.

Knell also reported on the rioting earlier in the morning on November 5th at Temple Mount, describing the rioters as “protesters” holding a “sit-in”.

“This was from early this morning. Israeli police had moved into the site to try to clear away a sit-in by Palestinian protesters. They had heard that there were some Jewish Right-wing activists who were planning to visit the site…ahm…and they were sitting there by the Al Aqsa Mosque trying to protect the area, as they saw it.”

The above BBC News website written report now about the terror attack was originally titled “Clashes briefly shut key Jerusalem holy site to visitors” and related to the morning’s rioting on Temple Mount. That article was promoted by the BBC on social media using the inaccurate term “worshippers” to describe rioters throwing rocks and fireworks. It failed to mention the Fatah incitement which preceded that incident.

BBC reporting of events in Jerusalem continues to compromise the corporation’s obligations to inform audiences accurately, impartially and fully of the incidents themselves and their background. Until the BBC abandons its own self-censorship on reporting the issue of Palestinian incitement it can only continue to fail to fulfil its public purposes.