As readers no doubt recall, on November 28th listeners to the BBC World Service radio programme ‘Outside Source’ were told by BBC Arabic correspondent Shahdi Alkashif that Israel is not allowing building materials into the Gaza Strip for the repair of houses damaged during the summer conflict.

As was noted here at the time, that claim is untrue. Even Arabic language media (which one presumes Alkashif reads) reported that 600 tons of cement has entered the Gaza Strip via Kerem Shalom crossing on December 2nd  and Gaza-based journalist Hazem Balousha snapped a photograph apparently showing some of the building materials BBC audiences were told does not exist. 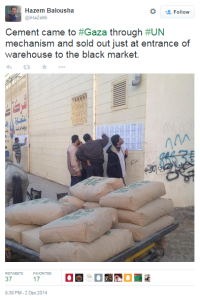 However, there’s a lot more to the story too, as told here by blogger Elder of Ziyon.

Back in October the BBC devoted quite a lot of coverage to the Cairo donors conference and the topic of the touted UN monitored  “temporary mechanism” intended to prevent building supplies being used for the purposes of terror. Perhaps it is time to send a BBC reporter to find out just how well that temporary mechanism is working – if it can find one who recognises a bag of cement when he sees it.