On December 13th an article by Matthew Teller titled “The Jews of Arabia” appeared in the Features & Analysis section of the BBC News website’s Middle East page and in its Magazine section. 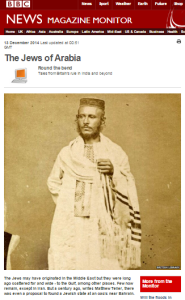 Based on material recently digitized by the British Library, the article represents one of the rare occasions on which the BBC relates to the topic of Jews from Arab lands. However, it also includes the following statement:

“…Bahrain has a tiny Jewish minority, comprising only a few families – though they wield significant power. Until last year, Bahrain’s ambassador to the US was a Jewish woman, Houda Nonoo.” [emphasis added]

According to most accounts, there are about three dozen Jews in Bahrain. Their one synagogue is permanently closed and they are not permitted to visit Israel. The BBC would nevertheless have audiences believe that, in an absolute monarchy ranked ‘not free’ by Freedom House in 2014, those thirty-odd people “wield significant power” without giving any further details with regard to what that power entails and how it is “significant” in that authoritarian regime, beyond the fact that one Jewish woman served as an ambassador for five years.

Relatedly, via the Point of No Return website, we learn that an addition has apparently been recently made to the timeline on the BBC’s Israel profile which, despite its many other faults, now includes the following:

That at least is a step in the right direction.

Like Loading...
Tags from the story
Accuracy, Bahrain, BBC, BBC News, BBC Online, Israel, Jews from Arab Lands
Written By
Hadar Sela
More from Hadar Sela
Thanks to all the many readers who have taken the time to...
Read More