December 28th saw the appearance of a filmed report in the technology section of the BBC News website (also apparently shown on that day’s edition of BBC Breakfast on BBC One and the BBC News channel) under the title “What news event got us tweeting and posting in 2014?“.

Regarding what he described as “the top three news events shared on social media this year”, presenter Graham Satchell told audiences:

“At [number] three, the month-long bombardment of Gaza: a conflict with Israel seemingly without end.”

Those words were presented with a background of two images: notably both black and white photographs whilst the rest of the report is of course in colour. 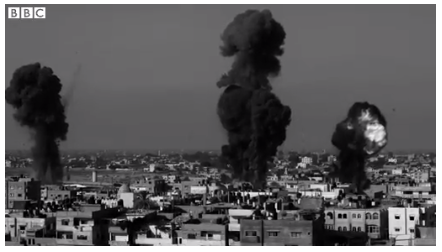 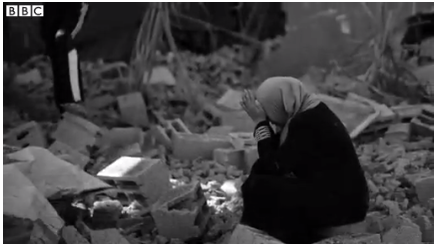 No further context was provided. Probably much like the Tweets and posts which made this topic the third most shared of the year, Satchell’s report made no effort to inform audiences that “bombardment” of Israeli villages, towns and cities also took place throughout the fifty days of the conflict or that what led to its outbreak were over 280 incidents of missile fire by Gaza Strip based terrorist organisations at Israeli civilian targets between June 14th and July 8th and the later discovery of cross-border tunnels constructed for the purpose of terror attacks.

Social media is of course by nature both superficial and easily manipulated to create a level of ‘noise’ way beyond the actual significance of a story by focusing on its eye-catching sound-bites alone. How many of the Tweets and posts which placed the “bombardment of Gaza” in third place actually originated from a small number of political activists and how such activism serves the interests of Hamas’ PR war is not a topic which Satchell saw fit to address.

That of course can only be the case if news services allow social media to influence their agenda. Among the questions BBC audiences may be asking is why they even need the mainstream media to act as an intermediary between them and what they can already discover for themselves (for free) and do they actually want the content provided by their news service to be dictated by the Tweets and Facebook posts of interest groups and anonymous subscribers to those services and others.

The BBC’s contract with its funding public obliges it to “inform, educate and entertain“. The issue of whether context-free amplification of topics popular on social media – as seen in this report – can be said to meet the terms of that remit is one which readers are invited to discuss in the comments below.