Over the past few weeks we have repeatedly observed on these pages that BBC reporting of the recent surge in violence in Jerusalem and elsewhere was devoid of any serious attempt to inform audiences about the incitement and glorification of terrorism coming from official Palestinian Authority and Fatah sources and on occasion even attempted to airbrush those crucial factors from the story. On November 18th, for example, during an interview with Israeli politician Tsipi Livni, the BBC’s Tim Franks charged:

“…the Israeli Prime Minister Binyamin Netanyahu equates the actions of Hamas and Mr Abbas. He says that they are both responsible for incitement. That’s not true, is it?”

As well as being the (long-since unelected) president of the Palestinian Authority, Mahmoud Abbas is of course the chair of the PLO, with the largest faction in that organization being Fatah, which he also heads.

“Many analysts regard Mahmoud Abbas as a moderate. He has condemned the armed Palestinian uprising and favours the resumption of negotiations with Israel.”

The BBC News website also offers its visitors two profiles of Fatah. In this one from 2011, readers are informed that:

“Under Arafat’s leadership, the group [Fatah] originally promoted an armed struggle against Israel to create a Palestinian state. But it later recognised Israel’s right to exist, and its leaders have led Palestinian peace talks aimed at reaching a two-state solution.”

“With international pressure mounting, Fatah – though notably not the al-Aqsa Martyrs’ Brigades – signed a declaration rejecting attacks on civilians in Israel and committing themselves to peace and co-existence.”

So, to recap, the BBC informs its audiences that the party headed by the moderate Mahmoud Abbas recognizes Israel’s right to exist, rejects terrorism and is committed to “peace and co-existence”. Now let’s take a look at some of the imagery being used by Fatah to promote the 50th anniversary (on January 1st 2015) of its first terror attack on Israel: an occasion which some might find it odd for a party which supposedly now rejects terrorism to be celebrating at all.

As we see in the images below complied by PMW, one dominant theme is the eradication of Israel from the map: obviously rather a strange practice for a group which the BBC tells us recognizes Israel’s right to exist. 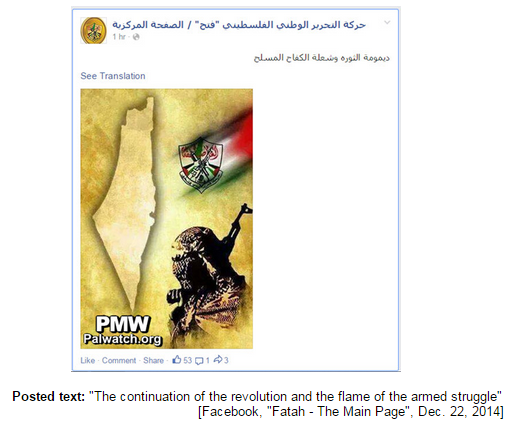 A message of rejection of violence and commitment to “peace and co-existence” – as claimed by the BBC – is clearly not being promoted to the Palestinian street in this image: 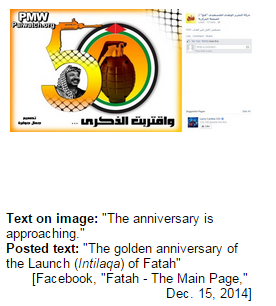 Or in this one: 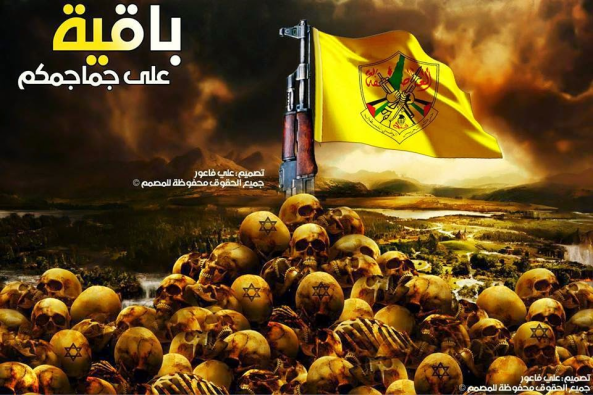 Over the past few days a series of rallies have been held in PA controlled areas to mark that 50th anniversary of Fatah’s first terror attack against Israel. Israeli journalist Gal Berger has photographs of the events organised by Mahmoud Abbas’ party in Bethlehem, Dheisheh, Qalandiya and Tulkarem. Needless to say, none of these rallies has been covered by the BBC.

Members of the BBC’s audience seeking to enhance their understanding of the topic of the failure of last year’s negotiations and the ‘peace process’ in general would no doubt find it helpful to be informed of the existence of such images and events. The BBC, however, continues to promote its stylized and sanitized portrait of the Palestinian Authority, Fatah and Mahmoud Abbas whilst studiously avoiding any real reporting on the crucial topics of incitement and glorification of terrorism.