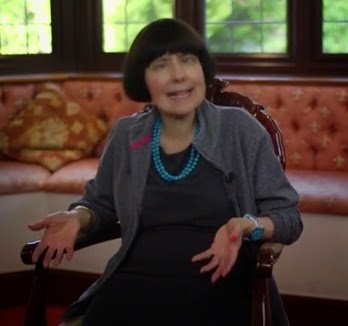 Deborah Maccoby… yeah, I know, my American friends will question my preoccupation with such minor and generally obscure elements of British society. And I don’t think that next picture will change their opinion significantly:

Deborah Maccoby bills herself on some occasions* as “Executive, Jews for Justice for Palestinians”. Alternatively she presents herself as “a member of the Executive Committee of Just Peace UK, the Israeli-Palestinian peace group and the UK branch of ICAHD (the Israeli Committee Against House Demolitions)”. At the same time she is gainfully employed “at the BBC World Service as a Production Assistant and has written book reviews for the Arabic Service”. Which is a significant point, showing a person with access to one of the heaviest propaganda juggernauts out there.
So, if after looking at the pictures, you have conjured in your mind an image of one of these slightly demented aunts that are very good in making their own preserves or jams, overcook the roast and are afraid of spiders – perish the thought. Deborah Maccoby is a very strong anti-Zionist presence on many fronts and, as a prominent member of the British “AssaJew” community, has quite a few ideas to offer on many subjects.
One of such subjects is a solution for antisemitism, which Ms Maccoby hinted about as early as 2009. In this letter that starts with predictable “Sir: I am a member of Jews for Justice for Palestinians and have participated in every one of the national demonstrations against Israel’s brutal onslaught against Gaza”, she offers the magic recipe in the last sentence:

If Jews really want to reduce anti-Semitism, they should speak out to change Israel’s destructive and self-destructive policies.

Jews, being a stubborn and intractable group of people, did not heed this prophetic warning in sufficient numbers, and the results, if you follow Ms Maccoby’s theory, inevitably followed: a Muslim activist Amedi Coulibaly, possibly one of the more outspoken objectors of Zionism, decided to demonstrate his unhappiness with the Zionist atrocities, killing four Jews in a Paris supermarket.
Now, my dear reader, you may be surprised by the logic of this act. After all, you may not see how a Jew, whose main fault is to go shopping in a kosher supermarket, is responsible for some Zionist entity somewhere far away. If, for instance, you are a Christian from, say, Argentine, traveling in Japan and get beaten up in a pub in Osaka, you could hardly expect that other Christians, like ones in Netherlands, for instance, will seek and beat up Japanese folks in their vicinity.
But Deborah Maccoby thinks differently from you and I and, being an uncommonly perceptive thinker, she offered a solution for Jews only. The solution, in her letter to the Guardian, is boldly titled: What Jews can learn from Muslims.
To start with, the guilty parties are identified:

But the Israeli government, with its new bill proposing to make Israel the nation-state of all the Jews in the world, and Jewish organisations such as the Board of Deputies, with their claim that the majority of Jews support Israel’s oppressive policies, contribute to the conflation of Jews with Israel and the subsequent rise in antisemitism and attacks on Jews.

Then follows the positive example that further attenuates the guilt of the above evildoers:

…and the swift and powerful condemnation issued by Muslim groups all over the world will help to reduce anti-Muslim feeling and deter young Muslims from joining the jihadis.

Of course, a person of weaker faith in humanity could express some doubts re that “swift and powerful condemnation”, after reading, for example, this:

“The Kalashnikovs, the identity cards the [killers] supposedly left behind, it was all staged,” said Boular, as his friends nodded in agreement. “It was a conspiracy designed by the Jews to make Muslims look bad.”

French newspapers reported that some students in these neighborhoods—as well as other heavily Muslim areas near cities like Lille—refused to participate in Thursday’s national moment of silence for the victims of the terror attacks. One teacher said up to 80 percent of his students didn’t want to observe the silence, and some said they supported the attackers. “You reap what you sow,” a student who refused the moment of silence told his teacher in reference to the terrorists’ victims, according to Le Figaro.

The (purely hypothetical, of course) person of weak faith may also inquire what the following facts have to do with Zionist atrocities:

The survey found that one in four Britons think Jewish people chase money more than others while one in six claimed that Jews thought they were better than others and had too much power in the media.
One in ten said Jews were not has honest in business and one in five said they questioned their loyalty to Britain due to their connection with Israel. Ten percent of those questioned would not be happy if a relative married a Jew.
In a separate survey carried out by the CAA, more than half of British Jews feared they had no future in the UK and a quarter said they have considered leaving the country in the last two years.

But of course, there is no accounting for people weak on faith, after all the recipe cooked up by Deborah Maccoby is so simple and accessible:

If world Jewish organisations were to learn from their Muslim counterparts and say loud and clear in response to Israeli atrocities “not in my name”, this could help to reduce antisemitism and make the recruitment of young Muslims by jihadis more difficult. Despite Freedland’s claim that Jews have “no control” over Israeli policies, such condemnation could also exert strong pressure on the Israeli government to stop its atrocities and enter into genuine peace negotiations with the Palestinian unity government.

Loud and clear – what could be simpler? Say loudly “not in my name” and you are absolved. And no Freedland could interfere anymore…
However (this Jewish habit of saying “however”, what can I do about it?). However, there are a few technical details to be worked out for comprehensive and full implementation of the idea. To start with, when an activist with a Kalashnikov rifle comes to punish express his protest to the Jews who haven’t yet denounced the Zionist misdeeds, how will this activist know which ones should be passed over, being proper “not in my name” Jews? Obviously, the text “not in my name” is not sufficient and impractical. Reading problems, reading comprehension issues, language barrier and whatnot… Of course, a placard like the one carried by Deborah Maccoby in that picture will go a long way to resolve the doubt, but somehow it doesn’t seem practical. So, instead of a large and unwieldy placard, the following accessory is offered (in two pieces, to be attached to the front and to the back of one’s coat, t-shirt or whatever):

This simple and practical fashion accessory will admirably resolve the issue of protecting the innocent, politically correct Jews of anti-Zionist persuasion. But of course, another question should be resolved as well: how to make sure that our activist doesn’t shoot some totally unrelated non-Jews? That’s real easy, using the same method of visual aids: 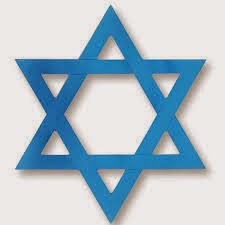 Just make all these no good Zionist supporter Jews wear this one and voila! No ambiguity, no mistakes and, even more important – no waste of ammo.
Now that we have figured it all out, the necessary steps for implementation could be started asap.
Lead by Deborah Maccoby, we shall separate the wheat from the chaff, and no doubt!
(*) On other occasions Ms Maccoby presents her beliefs:

First of all, I wouldn’t call myself an anti-Zionist, because I am in favour of a Jewish national presence in the Jewish homeland, though I do think the best way to solve the Israel/Palestinian conflict is for Israel to abandon the outdated ethnic nation-state model and find a new model, such as a binational or federated state. I suppose this would make me a post-Zionist.

These beliefs don’t make her a “post-Zionist”, of course, just a vapid creature who seems ready to acquiesce to another ethnic cleansing of her people. Her people, I said? Hm…