Since its brief – and revealing – dabble with the topic of the pending general election in Israel at the beginning of December, the BBC has to date refrained from producing any further content on that topic. 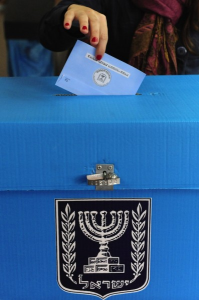 However, we can of course expect that as the date of the election (March 17th) approaches the BBC will be producing no small number of reports on the subject. We can perhaps also assume that its Hebrew-speaking staff based in Israel will have a part to play in helping their colleagues who do not speak the language in which the election is being conducted to make sense of it all, and that those understandings will then be passed on to BBC audiences worldwide.

As Israeli readers cannot have failed to notice, one election-related topic currently featuring prominently in the country’s media is that of assorted allegations concerning the wife of the current prime minister and among the plethora of articles, reports and op-eds on that subject is a scathing item written by Israeli journalist Ben Caspit which appeared in Ma’ariv Online on January 26th  under the title “Silence of the lambs: when the truth about Sara Netayahu will come to light”.

BBC News producer Michael Shuval saw fit to promote that article to his followers on Twitter in Hebrew on January 28th, together with the added comment:

“An important document, and if there is no truth in it, let the prime minister’s office sue Ben Caspit and the paper Ma’ariv Online.”

“Presenters, reporters and correspondents are the public face and voice of the BBC – they can have a significant impact on perceptions of whether due impartiality has been achieved.  Our audiences should not be able to tell from BBC output the personal prejudices of our journalists or news and current affairs presenters on matters of public policy, political or industrial controversy, or on ‘controversial subjects’ in any other area.  They may provide professional judgements, rooted in evidence, but may not express personal views in BBC output, including online, on such matters.”

It will be worth remembering that Tweet when we read, watch and hear the ‘impartial’ BBC coverage of the Israeli elections just around the corner.