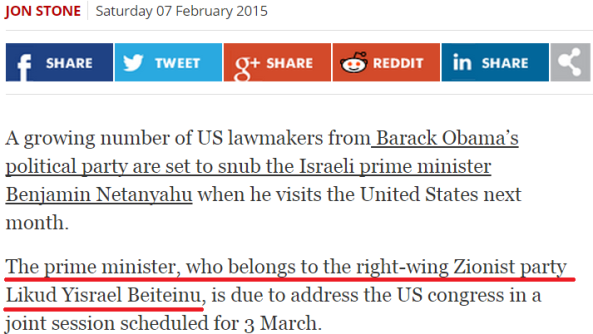 The prime minister is of course the head of Likud.

Mr. Stone, who previously worked for BuzzFeed and Politics Home, was evidently confused by the fact that Likud and Yisrael Beiteinu ran under a joint Knesset list in the 2013 Israeli elections. However, this was only a temporary electoral and parliamentary alliance consisting of two independent political parties with separate platforms.
The Likud-Yisrael Beiteinu alliance ended in July 2014, and both parties became, once again, separate Knesset factions.
Shortly after this tweet – retweeted by many who aren’t blocked by the British journalist – the Indy revised the passage in question.

This represents the second CiF Watch prompted correction to an article by Jon Stone in just over a month. In early January, editors at the Indy corrected a passage in which Stone claimed that Tel Aviv was the capital of Israel.